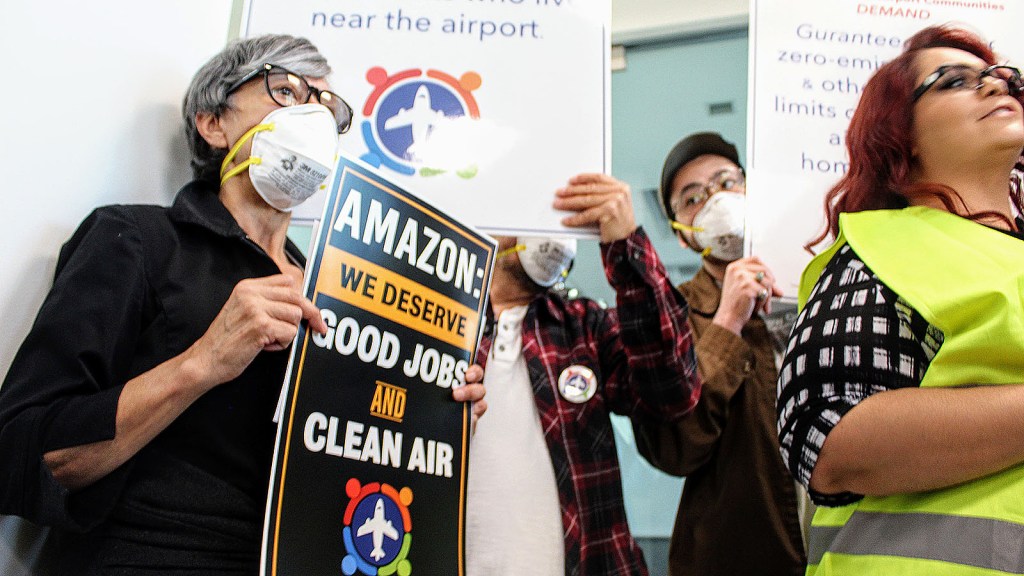 Last month, the Federal Aviation Administration approved a controversial expansion of the San Bernardino International Airport, despite an assessment projecting that the development could generate one ton of toxic air pollution daily in a California region already ranked the worst in the nation for ozone pollution. On Wednesday, a coalition of community residents, workers, and environmentalists sued in response.

The petition, filed in the U.S. Court of Appeals for the Ninth Circuit, challenges the FAA’s environmental assessment, which concluded the proposed Eastgate Air Cargo facility will have “no significant impact.” The suit was filed by the environmental law organization Earthjustice and the Law Office of Gideon Kracov. (Earthjustice is representing a community justice group and the Sierra Club, and Kracov is representing the Teamsters Local 1932 union.)

“We think there are significant impacts,” Adrian Martinez, a staff attorney with Earthjustice, told Grist. “It’s a project that’s going to dump a ton of air pollution in one of the smoggiest parts of the country.”

The lawsuit calls for a more vigorous environmental review of the project and asks the court to dismiss the FAA’s December decision on the grounds that the assessment doesn’t align with federal environmental law. The National Environmental Policy Act requires federal agencies to examine the environmental consequences of proposed projects — in this case, determining whether the project meets national ambient air quality standards. Earthjustice asserts that the FAA review relied on older, less stringent ozone standards.

“[The FAA] really did a shorthanded job of assessing the impact, and we just saw it as so outrageous in the context of a project in one of the most polluted parts of the country,” said Martinez. “It is a real affront to people who are suffering from terrible levels of air pollution throughout the year.”

Earthjustice also contested the greenhouse gas analysis in the review, as well as its assessment of other impacts like noise pollution.

The proposed air cargo facility will cost an estimated $200 million, generate as many as 26 new cargo flights per day, and create about 3,800 jobs and $5 million in revenue for the airport, according to the Los Angeles Times.

Critics say that California’s Inland Empire, the sprawling region east of Los Angeles that has become one of the nation’s most dense hubs of warehouses and logistics centers, is already overburdened by industrial pollution.

“At the end of the day, we believe that good employment and development could co-exist with having clean air, with having the ability to breathe in your neighborhood. Right now you see a lot of people who can’t do that,” said Anthony Victoria, communications director at the Center for Community Action and Environmental Justice, the local social justice organization that was party to Wednesday’s suit.

The proposed air cargo facility has triggered protests against the facility’s developer, Hillwood Enterprises. Earlier this month, about 150 people protested outside of Hillwood’s offices. A December protest also targeted Amazon, which is rumored to be the potential tenant of the proposed terminal. The coalition organizing the protests includes CCAEJ, the Sierra Club, and the Teamsters Local 1932. It has been active since news of the expansion broke in early 2019.

“We continue to set records for smog alerts in San Bernardino. If we passively let business as usual continue in the Inland Empire, this project will cost residents their health for generations to come,” Yassi Kavezade, a Sierra Club organizing representative, said in a statement.

The coalition is calling for Amazon to sign a community benefits agreement that would guarantee well-paying jobs for workers and require zero-emissions electric trucks. Residents hope such measures can mitigate pollution levels that have contributed to high childhood asthma rates in the region.

“Hillwood, a frequent Amazon developer, has taken insufficient measures to lessen the impact of their huge project on the working class and majority-Latino communities that surround the airport,” Mario Vasquez, Teamsters Local 1932’s communications coordinator, said in a statement. “A community benefits agreement that guarantees good jobs and clean air at this new airport terminal is crucial for the livelihoods of future generations in the Inland Empire.”

An FAA spokesperson said the agency does not comment on pending litigation. The San Bernardino International Airport executive director’s office and Hillwood Enterprises did not respond to requests for comment on Wednesday.