Americans smoke a lot of weed.

It’s a little tricky to get a handle on the actual numbers — there’s that whole “illegal” thing in a lot of places — but we can say there are at least 20 million users in the country. Colorado alone had nearly $1 billion in recreational and medicinal marijuana sales in 2015, enough to rake in more than $130 million in taxes and fees.

Weed’s becoming a hefty industry, and like any other, it’s going to have a hefty environmental footprint. So as decriminalization makes its THC-laden way across the United States, Grist is here to show you just how big that footprint is.

Electricity usage for indoor grows is off the charts

Now before you roll your eyes, kick back, and light up: Researchers have estimated that indoor grow operations account for a whopping 1 percent of total electricity use in the United States each year. (Indoor grows can be attractive because they offer multiple harvests and shorter grow times.)

“Whopping 1 percent” might sound a little paradoxical, but think about how crazy that number is. That’s about the same amount of electricity consumed by every computer in every home and apartment in the country annually.

Why’s that number so big? It mostly has to do with the high-intensity light bulbs that pot plants need to thrive when grown indoors.

In order to power all those light fixtures, as well as dehumidifiers and heating and ventilation systems, indoor grow operations use about eight times the amount of energy per square foot as a normal commercial building. That’s on par with a modern data center.

When indoor operations are run illegally, they’re even more energy intensive, because growers will often use diesel or gasoline generators to avoid pulling power from the grid and being detected. All told, indoor production is one of the most energy-intensive industries out there.

And all that electricity can be pretty dirty

Legal indoor growers plug into the grid, and about two-thirds of the electricity on the grid is generated by fossil fuels. That means:

That’s also the amount of carbon sequestered by 1.6 acres of U.S. forests in a year.

Which is a problem, because we’re also cutting down trees for outdoor growing operations. Speaking of which …

While growing pot outdoors is naturally more energy-efficient than doing so indoors — after all, you don’t need to plug in the sun — free-range weed has a different kind of environmental impact. Getting a patch of land ready for farming can mean cutting down forests, diverting rivers, and destabilizing whole ecosystems.

Pesticides and rat poison can also kill animals around outdoor grows. Consider the Pacific fisher, a cat-sized weasel-like character. A recent study suggested that more than 85 percent of Pacific fishers near grow sites in the Sierra Nevada range were exposed to poison, which accounted for about 10 percent of all deaths of the threatened species. 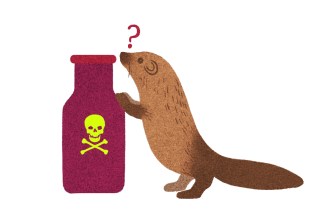 Though you can solve some of these problems by moving your operation into a greenhouse, that will still require electricity for ventilation, temperature and humidity control, and supplementary high-intensity lights.

In a sizable outdoor operation, the plants can suck up something on the order of a billion liters of water per square mile over a growing season. Some estimates suggest that pot plants use six gallons of water per day per plant over the summer. For reference, it takes about four gallons of water to run an energy-efficient dishwasher once.

So try thinking about your weedprint in terms of pizza

Here’s how we can put this data in terms of your own smoking and munching habits. That pizza sitting between you and those Aqua Teen Hunger Force reruns has a hefty environmental footprint, too. (Cows can eat a whole hell of a lot of alfalfa, and alfalfa is a thirsty plant.) To get a sense of pot versus ‘za, use our nifty calculator to compare a joint to a pizza slice: 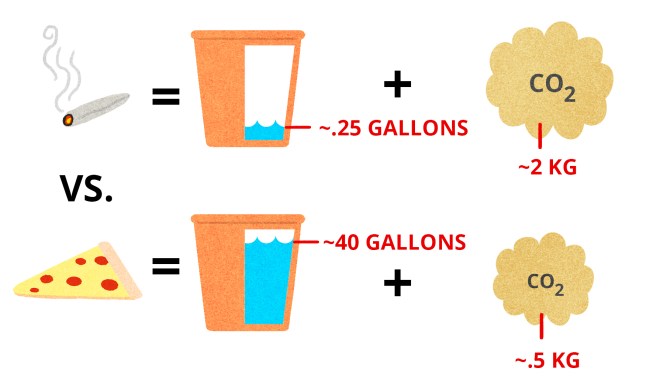 Damn. Does this mean I shouldn’t hit this bong?

Here’s the thing. There are plenty of climate-friendly fixes that would make a lot of sense if we wanted to green the weed industry, and many of them aren’t unique to pot. A cleaner energy mix would mean fewer emissions from on-grid electricity. Energy-efficiency standards could help guarantee less wasteful production. And if weed was decriminalized, growers would be less likely to rely on diesel generators indoors and more likely to use modern irrigation techniques outdoors.

As for you, dear pot smoker, life is all about tradeoffs — and since no one’s actually going to abstain from a spliff OR a slice because of their impact on the environment, it might just be better to keep these kinds of tradeoffs in mind the next time you buy. Context is everything.

You can also talk to your dealers about the growing conditions of their bud. (That’s a joke. They’ll probably stop selling you weed.)

Or call up a grower and ask if s/he is powering the operation with renewable energy. (Also a joke, but perhaps not entirely out of the question in the near future.)

Ultimately, you should probably just grow your own stash on the porch — though, you know, you’ll have to make sure you’re a medical user and/or have a production license. In which case, want to hang?

As sales boom, pot shops have become the new face of gentrification