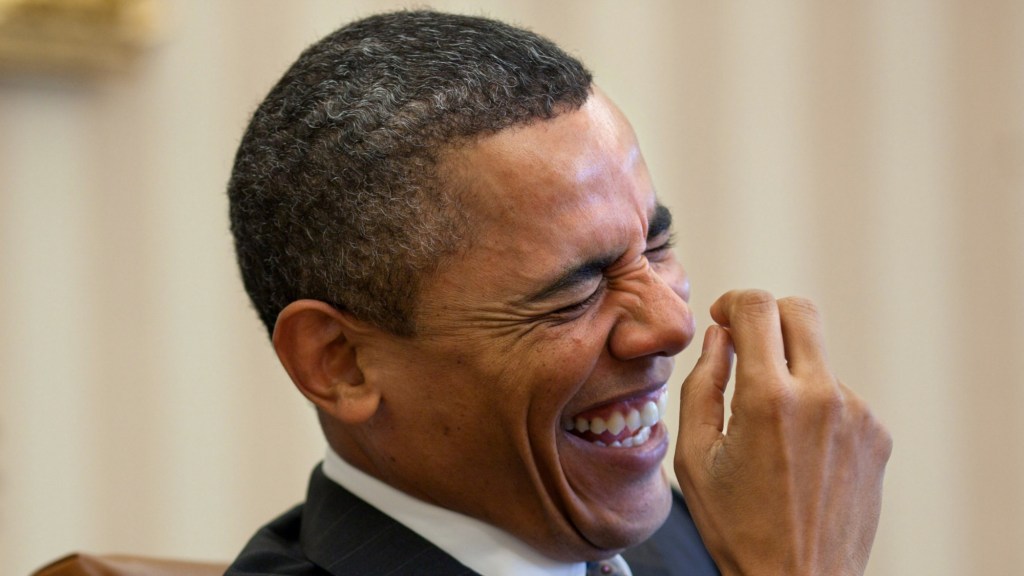 White House
joke's on you, assholes

It isn’t cool to wreck the climate. Not in 2014, anyway. That much is iceberg clear in the wake of a speech by President Barack Obama on Wednesday. Addressing a League of Conservation Voters’ annual dinner, Obama, who one year ago outlined a Climate Action Plan that sidesteps the obstructionist Congress, escalated the ridicule that he has lately been slathering on Republicans and other climate change deniers. From Politico:

“It’s pretty rare that you encounter people who say that the problem of carbon pollution is not a problem,” Obama said. “In most communities and workplaces, they may not know how big a problem it is, they may not know exactly how it works, they may doubt they can do something about it. Generally they don’t just say, ‘No I don’t believe anything scientists say.’ Except, where?” he said, waiting for the more than accommodating crowd to call back, “Congress!”

Obama smiled — not his big toothy self-satisfied grin, but his stick-it-in-the-ribs smirk.

“In Congress,” he said. “Folks will tell you climate change is hoax or a fad or a plot. A liberal plot.”

Then, Obama said, there are the people who duck the question. “They say, hey, I’m not a scientist, which really translates into, I accept that man-made climate change is real, but if I say so out loud, I will be run out of town by a bunch of fringe elements that thinks climate science is a liberal plot so I’m going to just pretend like, I don’t know, I can’t read,” Obama said.

These weren’t Obama’s first jabs at the atrociously anti-science, burn-it-all, fuck-the-planet, Koch-fueled Republican stance on climate change. As the San Francisco Chronicle reported over the weekend:

When President Obama stood before students in Southern California a week ago ridiculing those who deny climate science, he wasn’t just road testing a new political strategy to a friendly audience. He was trying to drive a wedge between younger voters and the Republican Party.

Democrats are convinced that climate change is the new same-sex marriage, an issue that is moving irreversibly in their favor, especially among young people, women and independents, the voters who hold the keys to the White House in 2016. …

Polls show large majorities of Americans favoring action on climate change, even if it causes electricity prices to rise. That’s one reason Obama has moved ahead forcefully on a rule proposed this month by the Environmental Protection Agency to limit carbon dioxide pollution from the nation’s power plants, the biggest step against climate change yet taken by any administration.

Recall that less than two years ago, Mitt Romney was ridiculing Obama for caring about climate change. “President Obama promised to begin to slow the rise of the oceans,” Romney said as he accepted the presidential nomination of the Republican Party, an apparent quip that elicited raucous laughter. “And to help the planet.” More laughter. “My promise is to help you and your family.” Cue near-deafening applause.