Take a hint, "clean coal." The world is so over you 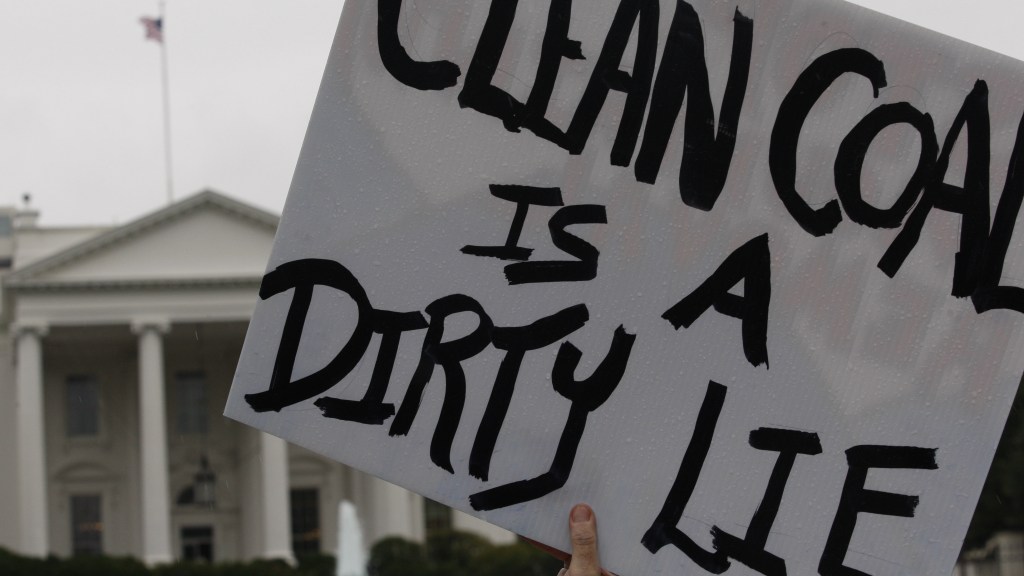 Take a hint, “clean coal.” The world is so over you

Like that old classmate still hanging around your hometown pub, playing pool, and talking about the great business idea that he had back in high school, clean coal is about to sidle up to the world’s barstool and — in a slightly slurred and defeated voice — tell you that, despite a few setbacks, it could still work.

You’ll smile and nod and pretend to be interested, but in truth, a lot’s happened since your days of joyriding around the suburbs and late-night Kmart runs. It’s 2015, and an old Volkswagen bus-turned-mobile Blockbuster just doesn’t seem like a lucrative idea anymore. Likewise, the promise of guilt-free fossil fuels in a time of dropping renewable energy prices and mounting clean coal disappointments seems a bit passe.

For a quick refresher, the basic idea behind clean coal is this: Instead of pumping CO2 directly into the atmosphere, coal plants equipped with carbon capture technology would just grab that CO2 on its way out of the plant and shove it back into the ground from whence it came. Simple, right? Well, not really. Here’s more from the AP:

In 2013, Norway pulled the plug on a major carbon capture project it had likened to the moon landing, citing spiraling costs. Another big setback came on Nov. 25, just days ahead of the U.N. climate talks in Paris, when Britain abruptly canceled 1 billion pounds ($1.5 billion) in funding for carbon capture technology, raising doubts about the fate of two projects competing for the money.

There’s currently only one clean coal plant up and running — the Boundary Dam power station in Saskatchewan, Canada — that was designed to capture about 1 million tons of CO2 annually, but managed less than half that during its first year, the AP reports.

Not to be left out, the U.S. has been working on its own clean coal plant down in Mississippi for almost a decade. Check out this Grist Special Report from former Grist fellow Sara Bernard for an in-depth look at that whole mess. The project has been mired in construction delays and unexpected costs since it was first proposed in 2006. Its initial price tag of $1.8 billion has risen to about $6.5 billion, and its construction, which began in 2010 and was supposed to be done by now, still trudges on.

According to the International Energy Agency and the U.N. Intergovernmental Panel on Climate Change, carbon capture technology on its own — as in, not necessarily attached to a power plant — might be a necessary tool in avoiding a 2-degree Celsius temperature rise. Fortunately, the independent technology has had somewhat more success than its clean coal application, although not by much. Here’s more from the AP:

There are 13 large-scale carbon capture projects in the world, collecting 26 million tons of carbon dioxide a year, according to the International Energy Agency. But that’s less than one one-thousandth of the world’s carbon dioxide emissions.

“There’s activity out there, but it’s not what various organizations would have hoped for,” said Juho Lipponen, who heads the IEA’s carbon capture unit.

In Paris, only eight of the 170 action plans submitted by individual nations point to carbon capture technology as a necessary mitigation tool, the AP reports:

Bill Hare, who heads the Climate Analytics institute in Berlin, said carbon capture may have missed its moment when investments didn’t take off despite a lot of “hype” a decade ago. Now, he said, the falling costs of renewable energy mean carbon capture has a lot of catching up to do.

“It’s probably harder to get this moving now than 10 years ago,” Hare said.

Likewise, Netflix and that VW emissions scandal will probably make your old buddy’s Blockbuster bus a harder sell today than it was 10 years ago. Although, let’s be real, it was a pretty killer idea back then.