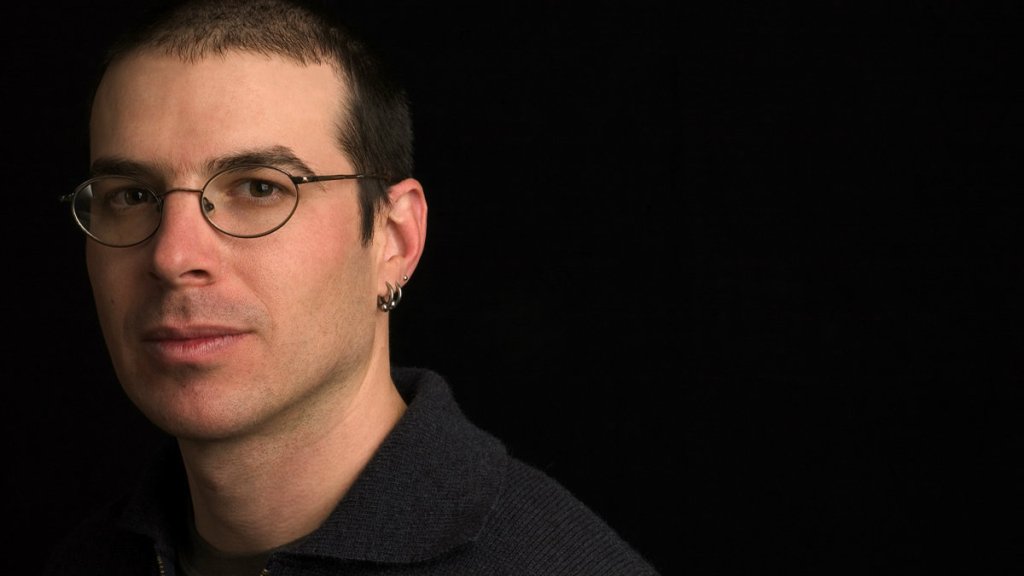 When Paolo Bacigalupi showed up at the Grist offices a couple of weeks ago prepared to talk about his book The Water Knife, he was also eager to talk about carbon taxes, dirty utilities, and the new solar panels he’d just had installed on his roof in Colorado. We shoulda known: The sci-fi novelist has a former journalist’s obsessive attention to detail regarding all-things climate, and an author’s prolific ability to string ideas together as he finds them.

So it’s no surprise that his latest novel takes place in a not-so-distant future where drought — currently throwing California through a loop, with the promise of much worse to come — has reduced the American Southwest to a handful of city-states scuffling over the last dregs of water. On one end of the spectrum, you have Las Vegas employing a  baroque combination of legislation and good old-fashioned violence to wrestle water rights from outlying cities, in order to feed its high-tech “arcologies.” On the other is Phoenix, a corrupt dust storm of a city, inundated with climate refugees from dried-out Texas and struggling to hold its head above the tide of corruption and human trafficking. It may look pretty gnarly, but it’s where we’re really headed, says Bacigalupi.

We sat down with him to talk drought, climate change policy, and why no one else is writing about secret water conspiracy theories. 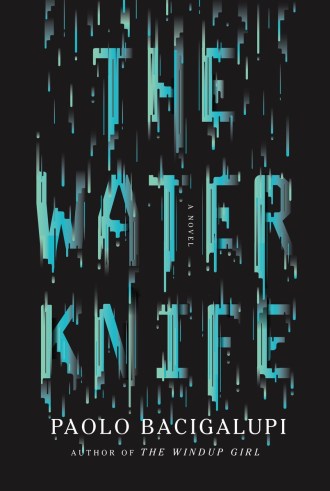 On the origins of The Water Knife:

Back in 2005, I was working for High Country News, [where journalist] Matt Jenkins was covering water shortages on the Colorado River. Las Vegas was already trying to dig deeper and deeper into the side of Lake Mead to get below the new high water line. [Journalist] Michelle Nijhuis was doing a lot of reporting on ecosystem effects of global warming that were already becoming apparent. You were just seeing these small changes that presaged larger changes. Those things were already on my mind then, so I created a short story called The Tamarisk Hunter.

Then when you looked at the fact that that drought looked a lot like climate models predicted will be the new normal for Texas in the future — you had this moment where you realize you are living in the future. This was a time traveling experiment. That was interesting, too, and frightening because the future doesn’t look particularly great — and our adaptive capacity seems pretty limited.

On our actual future:

We have data that tells us that certain kinds of events are more likely. I don’t claim to predict the future more than anyone else — I don’t claim to know how we will adapt, either. There are smart ways we could adapt — and there are smart ways we could avoid the risk problems. The fact that we’re doing almost nothing to avert it means that we’re increasing our statistical risk. The climate will become more unstable, weather will become more vicious. We could either be reality-based and engage with that or we can try to pretend that reality isn’t coming for us — but that’s not going to change what comes at us. It’s still out there.

I think we tend to look at the immediate techno-fix for the immediate problem, rather than looking back at the source cause of the problem. And so you see San Diego suddenly dusting off plans for desalinization plants. It’s like, yeah, to a certain extent there are things that people can do as the emergency gets worse. But there’s this other, much more important fix — we could just, you know, get ourselves off of our carbon diet. But that’s not where we’re going. Instead, we pour ourselves into the mitigation rather than into the solution.

We could be doing a carbon tax, you know, and start actually making a real fundamental change with how much risk we’re actually going to see in the future, and that would be a lot more. But instead, we’ll go with this odd patchwork of duct-tape solutions to this problem that we all want to pretend isn’t really all of our problem.

On that near-sighted techno-fix:

There are these arcologies, and they’re beautiful, they’re amazing — they’ve got hanging gardens, they’ve got waterfalls. They grow their own food; they recycle every bit of water and every bit of waste. They’re immensely efficient, so you can thrive in a desert. At the same time, they’re also representative of a complete failure, because they’ve essentially accepted that the only way to survive on a planet that used to be very friendly and supportive of our species is to build these integrated living environments that are totally separated from the planet.

It’s a short-term fix — it solves the human problem without solving the systemic problem. It’s the opposite of sustainable thinking. Even if in micro, it is sustainable. “Oh look, we recycle our water” — good for you, but there’s this other level where it’s just representative of a much more short-term thinking about the larger global problem.

Typically, techno-fixes flow to those people who have wealth. You see this a lot where the wealthy can save themselves from any number of things with their money, but it also means that essentially those people who have to most resources to make a general solution for the world are less motivated to do so, because they’ve already saved themselves. They’ve already built their own mini ark — so then they’re perfectly content to let the rest of the world die.

On “dystopia,””cli-fi,” and other labels:

I don’t really care what people label my books, as long as it makes them buy more books. Any given label is both an invitation and a wall. If somebody says that you write science fiction, that conjures certain images in people’s head. I don’t write about rocket ships, but if people think science fiction means rocket ships then, boom, you’ve got a wall between you and them. Similarly, with cli-fi: Those people who are really hungry to think about how is our world changing and how are we going to adapt and what do we need to be thinking about — that’s going to be a pretty intriguing and appealing thing. For someone who either thinks that global warming is a farce or who just doesn’t like political writing generally, or think that cli-fi indicates political agenda writing, and therefore didacticism, and therefore stupidity, you’re in a different space.

I sometimes talk about my futures being “broken futures” or “accidental futures.” I don’t think of them as being dystopian — because when I use the word “dystopian” that single word means a deliberately constructed place that is supposed to be heaven and yet is actually hellish for the people who actually live in it. Those are not the stories that I write. I write stories where everybody agrees that they’re in a terrible place, and nobody meant for it to end up this way, it just did. They have to live with the consequences of our present moment’s decision, those future people — they’re living inside of that broken future that we manufactured for them.

The other way that I think about the kinds of stories that I write is “black swans.” I’m really interested in the idea of the unexpected, unanticipated, statistically dismissed danger. I’m focused on stories that seem to be largely invisible but could have big consequences. We could look at snapshots of Lake Powell and you could see that this reservoir is low and it’s never refilling and this is a problem. But it’s a silent problem. It’s one that doesn’t really scream out, and it doesn’t make a headline, it doesn’t make anyone jump up and panic — it’s not the tiger at your door, it’s just a pretty blue lake with red rocks and a white bathtub ring around it. There’s an opportunity in those stories where there’s some silent threat, or some dismissed threat, to recontextualize those, and give them meaning where they didn’t have meaning before.

They tend to be dry, they tend to be full of facts, they tend to be about abstractions — and those aren’t things that human beings naturally connect to. You can write fascinating stories about water policy issues and water rights and subsidiary rights and how junior rights affect senior rights. There’s all sorts of things that are really important, that are gonna affect our prosperity — and yet they are also so abstract that people almost can’t get a grip on them. It’s very difficult for a journalist to write about a water management task force, and convey that in a way that’s going to generate ad revenue or clicks or attention, or any level of viral focus.

As a fiction writer, you actually have an opportunity to go at the same ideas, but you can make them engaging. You don’t have to stick only to the facts, because you can move them into the future. You can say ‘What if this water management fails? what if it succeeds? what kind of world does this build? what kind of policy does this world build?’ And then you place characters in that world, and then the reader gets to live viscerally in that world. If the reader is living in the skin of a climate refugee and they have to live that life and experience what it’s like to be a refugee out of Texas, stuck in Phoenix with very little hope, living as a second-class citizen. What is that — how does that change their perspective on drought management, water power, things like that.

There’s a chance that that feels a lot more visceral and real. So, there’s an opportunity to contextualize things that are going on in our present moment, that you just can’t do as a journalist. I think the genius of fiction is that generates empathy. It moves us into a space where we live an experience as opposed to thinking about or considering an experience.

On the next one:

I think the next thing that I’m interested in is biodiversity. That’s the next one that’s kicking around in the back of my head — it’s another one of those silent things. You don’t really notice species going extinct, especially when you never knew the species existed in the first place because we never got around to cataloguing it. There’s just this steady drip of extinctions. We are in the middle of a mass extinction event, and we are causing it, and that matters — I think. Or let’s put it this way: I guess we don’t know how much it matters. Our ecosystems are a fairly tightly woven set of tapestries. You can pull a certain number of threads out and it sort of doesn’t matter to the whole woven thing. But at some point you pull out enough threads that the whole thing just unravels. And I wonder about that. I wonder how many threads you can pull before the whole thing collapses. Where is that last species that will be “oops, too many.”

I’m assuming it’s going to be something like some insect we’ve never heard of. We never get hit by the things we’re expecting. If we’re looking at it and we’re worried about it, that’s not where the danger lies. The danger lies in those places we weren’t looking, because we didn’t have the imagination to look.