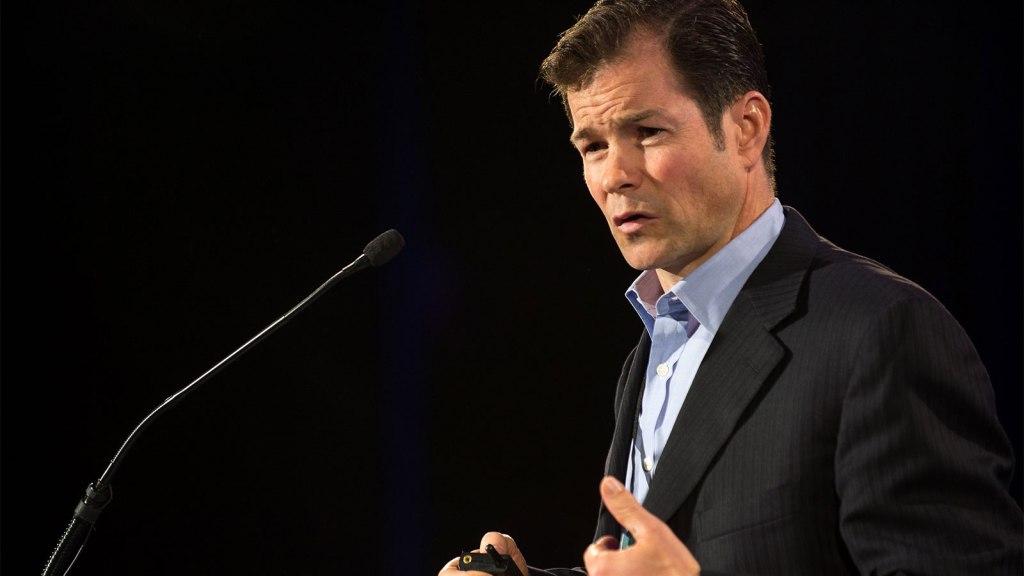 Goalie Mike Richter played in the National Hockey League for 14 seasons and, in 1994, led the New York Rangers to their first Stanley Cup in over 50 years. His full-split save (ow, fellas!) against Pavel Bure in the ’94 playoff run still makes Rangers fans giddy. Since retiring in 2003, the U.S. Hockey Hall of Famer has dedicated his career to saving something other than pucks. Now he’s saving energy.

Richter is the CEO and founding partner at Healthy Planet Partners, a company that retrofits commercial buildings with clean energy technologies. The model is similar to that of SolarCity’s: If a building owner wants, say, solar power, HPP will install the panels for free. HPP owns the technology and charges customers a monthly utility fee (think of it as DirecTV but for cleaner energy). In July, HPP secured $26 million in funding. Richter’s venture even allows him to stay connected to his first love, sports: HPP is nearly done installing solar panels at the Peoria Sports Complex, where the Seattle Mariners train in the spring.

With the NHL season starting this past week, Grist interviewed the hockey icon about the renewable energy biz, his love for the great outdoors, and the connection between sports and the environment. Here’s what we learned about him:

Back in his playing days Richter took courses on and off at Columbia University. Then, in 2009, Richter graduated from Yale University with a degree in ethics, politics, and economics with a concentration on environmental policy.

He gets that humans need to curb climate change — and isn’t afraid to speak up about it.

Commercial buildings account for 18.6 percent of U.S. energy consumption. To help lessen the carbon impact, Richter and his HPP team retrofit older commercial buildings with cleaner technologies ranging from solar panels to wind power to geothermal. “What we’re trying to do is work as a doctor for a building,” he says. Richter firmly grasps humans’ role in climate change, as evidenced by a piece he wrote earlier this year for The Guardian condemning Keystone XL and “dirty fossil fuels.” He views HPP as a way to help curb man-made pollution. “Whether you’re an environmentalist or not, most people think that it’s about the trees and the birds and the fish, but it’s about humans,” he says. “It’s about our health, our quality of life.”

He sees the green in environmental issues, a.k.a. money.

It’s expensive to make buildings greener. Deploying large-scale commercial solar power systems and related energy projects can easily run $1 to $10 million, Richter says. To make cleaner energy more appealing, HPP handles installation and maintenance and sells clients on the idea of monthly utility savings; Richter says his services can cut a landlord’s power bill by about 10 percent. “Financing is really a win-win-win,” he says. “It’s good for us, good for the client we’re doing business with, and it’s fantastic for the community in which we’re doing the work.”

He’s got a soft spot for the outdoors.

Richter spent his senior year of high school in Lake Placid, New York. There, he discovered the majestic Adirondack Mountains. He knew they were something worth saving, so he joined the Adirondack Land Trust. It’s dedicated to protecting the landscape and contributing to the quality of life for Adirondack residents. “I’m 48 years old,” he says, “and what I’ve seen there 30 years ago when I was a high school student is the same thing I see now.” Richter also serves on the boards for both the Sierra Club Foundation and Riverkeeper, which safeguards drinking water for New Yorkers.

He’s tapped into an arena more environmentalists should seek: sports.

“Sports has an enormous influence on us,” Richter says. He’s right: Over half of Americans are sports fans. But, as we learned from the NHL 2014 Sustainability report, pro sports also produce tons of carbon dioxide emissions, and hockey in particular has felt the effect of warmer temperatures. While the leagues are slowly switching gears with programs like NFL Green, NHL Green, and the MLB Greening Program, Richter would like to see athletes step up and show fans the problems and solutions related to climate change. Which is why, in 2010, he started Athletes for a Healthy Planet, an organization geared around getting jocks more involved in environmentalism. Richter feels that athletes, who obsess about personal health, should be as equally connected to the health of the planet. In the spirit of Nike founder Bill Bowerman’s once wise words, “If you have a body, you’re an athlete,” Richter likes to say, “If you breathe, you’re an environmentalist.”