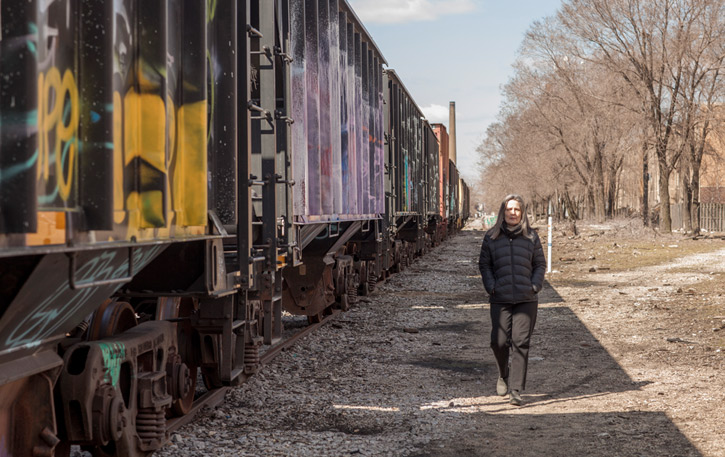 Sculptor Frances Whitehead calls herself a provocateur. She’s no Banksy. Instead, this professor of sculpture at the School of the Art Institute of Chicago pushes people to think differently about how art fits into, and shapes, our lives, from the mundane to the political — and how it might help us imagine a more sustainable future.

In 2006, Whitehead penned a creative manifesto called “What Do Artists Know?” The document is a point-by-point articulation of what a creative mind can bring to the broader cultural conversation. She later swayed city officials to place artists into government via her program, The Embedded Artist.

It was only a matter of time before Whitehead, a longtime gardener who frequently incorporated natural objects into her sculpture, began to focus on the combination of art and science. In 2004, Whitehead and her husband purchased a 3,000-square-foot warehouse and converted it into their Green House, a haven of sustainability and reuse. Replete with wind turbines and geothermal heating and cooling, the structure served as an educational classroom for design students and inspired new ways of approaching the post-industrial city.

Sustainability, Whitehead says, “is a cultural problem and artists can help find the solution.”

Next, in 2008, Whitehead launched a program called Slow Cleanup to restore the land occupied by shuttered gas stations throughout Chicago. The program, a partnership between the Art Institute and the Chicago Department of the Environment’s Brownfield Initiative, uses phytoremediation (a.k.a. plants) to clean up the polluted lots.

And now, Whitehead is the lead artist on Chicago’s newest park, the 606, which will transform three straight miles of an abandoned rail line into parks, bike and running trails, and pedestrian walkways. Spearheaded by the Trust for Public Land and formerly known as the Bloomingdale Trail, the project is considered to be one of the most innovative and unusual projects of its type in the world.

It’s along the 606 that Whitehead, along with engineers and landscape architects, has designed an installation that will bring trail users face-to-face with the effects of climate change. Lining the trails, 453 apple serviceberry trees will bloom in a wave, spreading east to west over the course of five days, thanks to Chicago’s legendary lake effect, which keeps temperatures cooler near Lake Michigan. Scientists and the public will be able to track the blooming year-to-year, thus keeping a running diary of shifts in climate. Mile markers set in the jogging path near specific trees will be fitted with barcodes so that runners, for example, can keep track of when they bloom. Blooming periods will be measured against the bud and bloom of lilac bushes along the path and forsythia that will trail over more than 30 bridges and overpasses on the 606.

“If it’s recorded year-by-year, it will create a climactic centennial for the city,” says Mark D. Schwartz, a professor of geology at the University of Wisconsin, Milwaukee, who created the climate model for the 606. “I’m not aware of any other projects like this.”

The inspiration for the 606 planting was Japan’s 1,200-year-old cherry blossom festival, but Whitehead is taking it one step further, using the concept of phenology, through which everyday citizens track the progression and weather shifts of the seasons. “The Japanese come out to view the blossoms for beauty,” Whitehead says. “And I thought, ‘What if through beauty we can teach? Could beauty replicate science data, can beauty generate awareness?”

Liam Heneghan, an urban ecologist who teaches at DePaul University and who with Chicago Wilderness will lead the citizen science program, says that the strength of Whitehead’s work “is that it emerges from a process of thought that is not just art, not just science, but rather represents a synthetic approach to a contemporary problem.”

For Chicagoans, the blooming serviceberry trees will put a face, initially a beautiful one, on the oft dreaded lake effect usually visible in fist-sized snowflakes. And over time, those same trees will bring the public face-to-face with the unpredictability of climate change, through something as simple as a flower’s budding.

Planting along the 606 is scheduled to begin late next summer, resuming in the spring of 2015.