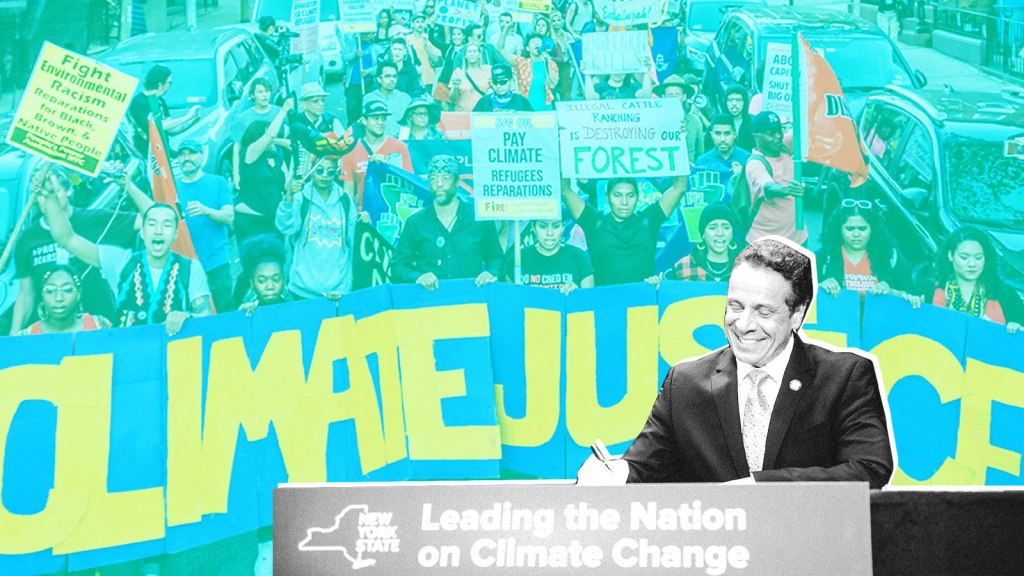 One year ago today, New York Governor Andrew Cuomo signed the Climate Leadership and Community Protection Act (CLCPA) into law, committing the state to net-zero emissions by 2050. It was New York Renews, a statewide coalition of nearly 200 advocacy groups, who fought to bring what is now the Empire State’s landmark climate law to fruition.

Despite a bumpy ride, both the CLCPA and a companion environmental justice bill finally went into effect in January. For the one-year anniversary of the CLCPA’s passage, New York Renews is keeping tabs on the law’s progress: On Thursday, the coalition called for a public audit of statewide agency spending to ensure that New York is complying with the law’s mandate that at least 35 percent of state energy and climate spending is invested in pollution-burdened communities.

“Goals are no good unless you meet them,” Timothy Kennedy, a state senator who co-sponsored the CLCPA, said during a virtual town hall on Friday. “We need to make sure that we take the CLCPA and enforce environmental standards that protect the very communities that are disproportionately impacted by COVID-19.”

PUSH Buffalo — a community-led organization in Buffalo, New York, that focuses on advancing economic and environmental justice — has long promoted a just transition away from fossil fuel dependence, and its particular focus is retrofitting old buildings to meet sustainability standards. Rahwa Ghirmatzion, the organization’s executive director, said that PUSH is already taking steps to implement these grants with a multi-site, 53-unit net-zero emissions housing project that would contain a rooftop solar power installation and geothermal heat pumps. PUSH, which is also one of the founding groups behind New York Renews, also seeks to provide unemployed people or youth who can’t attend college with training opportunities to participate in the green development project.

“We don’t want to just think about legislation — we also want to work on an implementation strategy to make sure the law has teeth,” Ghirmatzion told Grist. “Oftentimes as organizers, we pass a lot of bills and then they become weak and watered down and not actualized.”

Environmental advocates say that New York’s climate targets can’t be met without certain major reforms that need to be executed. Replacing so-called peaker plants — power plants that typically only run during peak periods of high demand in electricity, especially during scorching summer heat waves — is a major demand that environmental justice groups are calling for under the CLCPA’s climate targets. A recent report found that New Yorkers over the last decade have shouldered more than $4.5 billion in electricity bills to pay the private owners of these polluting power plants, just to keep those plants online in case they’re needed — even though they only operate between 90 and 500 hours a year.

“Billions of dollars invested in fossil fuel infrastructure is definitely not part of the equation to get us to our targets fast and equitably,” Summer Sandoval, energy democracy coordinator with UPROSE, a grassroots organization focusing on sustainability and environmental justice, told Grist. “It’s not just about reducing emissions, but also taking a hard look at the different aspects tied to emission reductions, like environmental health risks.”

There have been some victories on this front: Environmental justice groups have been using the CLCPA as a powerful tool to oppose fossil fuel construction and expansion. So far, the biggest victory this year has been putting an end to the controversial Northeast Supply Enhancement project, also known as the Williams Pipeline. National Grid, the gas utility that operates in Brooklyn, Queens, and Long Island, would have been the sole customer of the pipeline’s gas. At one point, the fate of New York’s climate targets was hanging in the balance because the project was still moving forward. But in May, the Department of Environmental Conservation (DEC) officially killed the pipeline by rejecting a key permit for the project, because it wouldn’t meet the state’s water quality standards. While the CLCPA was not the basis for the decision to deny permits, a DEC letter to the company leading the project proves that the climate law clearly weighed heavily in the ultimate outcome, when the project’s qualitative impacts were assessed.

To keep state agencies on track to achieve its goals, the CLCPA created two significant decision-making bodies. The first is the Climate Action Council, which is in charge of writing the entire scoping plan for New York’s economy to transition off of fossil fuels. The second is the Climate Justice Working Group, which is meant to guide the state in carrying out its ambitious climate targets by ensuring that the environmental justice provisions of the CLCPA —such as clean energy spending, green jobs, and affordable resources — are enforced and distributed equitably to low-income communities of color. Its appointees were announced last month, and they include some of New York’s most prominent environmental justice advocates, including Ghirmatzion.

The CLCPA was a long time coming. The Republican-controlled state senate blocked the bill for three consecutive years until Democrats took control in 2018. Then, before penning his signature on the bill, Governor Cuomo not only changed the name by adding the word “leadership” at the last minute, but he also slashed some major provisions that advocates from marginalized communities had pushed for, such as a crucial labor section that advocated for displaced fossil fuel workers and promoted fair wages for workers building the renewable energy sector. Cuomo’s version of the bill also included vague language that made it unclear how much cash would actually flow to “disadvantaged communities.”

With climate change still accelerating against the backdrop of a global pandemic that has disproportionately impacted Black and brown communities, New York Renews says that the state is still moving too slowly and isn’t taking the CLCPA’s social justice provisions seriously. The Climate Action Council has only met twice since it formed in March, while the Climate Justice Working Group has yet to have its first meeting, which is scheduled for later this month.

“We have to work together in an intersectional way,” Ghirmatzion told Grist. “We have to address the root causes, which means focusing on the most impacted in our communities, if we’re ever really going to create the world we want to live in.”