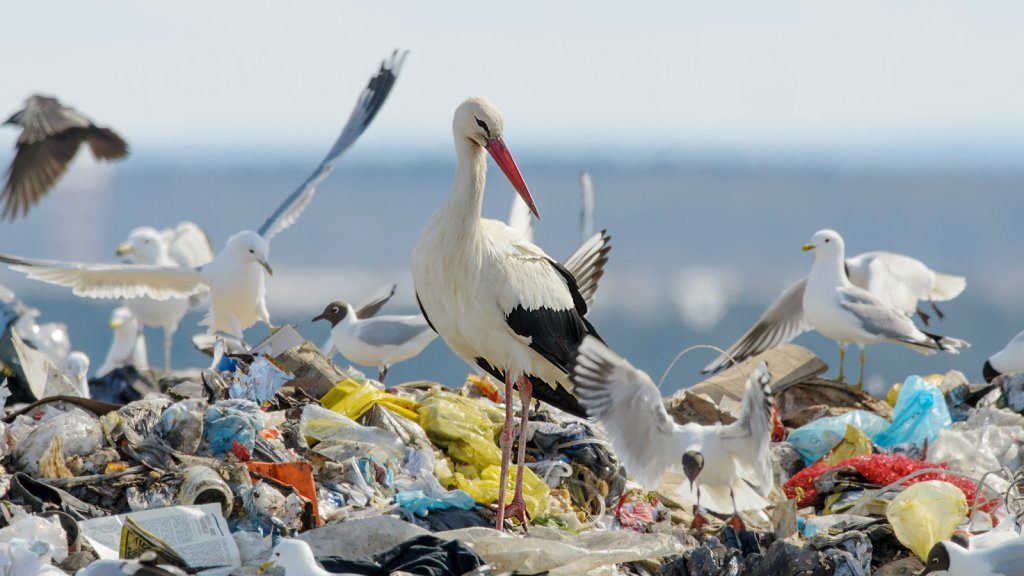 Most people like to think of storks as wholesome symbols of purity, delivering tidily wrapped babies like Amazon packages and giving parents an excuse not to tell their kids the real — and horrifying — circumstances of their conception.

But it turns out storks are actually more like those freegans who lived down the street from you in college — a bunch of young squatters who have sex, eat garbage, and  sing all the time like everyone wants to hear their latest jam sesh.

According to a new study published in the journal Movement Ecology, some white storks in Europe are no longer migrating south during the winter, because they can subsist all year on the all-you-can-eat buffet that we call landfills. The researchers tracked 48 white storks in Iberia at various times over the course of 13 years, ultimately focusing on 17 birds in particular. From Quartz:

“It’s gross, actually,” Aldina Franco, an ecologist at the University of East Anglia in Norwich, England and lead author of the study, told Quartz. “When a truck arrives, they all congregate behind it. Sometimes they eat computer parts, but what they are really looking after are our leftovers.”

Birds eating trash, changing migratory patterns, generally getting screwed left and right by consumerism and climate change — this is all sounding depressingly familiar.

Fortunately, it’s not all bad news for the storks. Birds who don’t migrate tend to breed earlier and more successfully, Franco and her colleagues point out, observing that “the continuous availability of food resources on landfill has facilitated year-round nest use.” So in a way, we’re actually helping the storks! For once, our garbage is doing something good for the world!

Those who lived closest to the dump tended to use it more, and almost all individuals ate more garbage during the non-breeding winter months, when other foods were scarce and the birds didn’t have to worry about meeting the more sensitive dietary needs of their offspring. (There was, however, one oddball who lived especially far from the dump and still visited it often — even during breeding season. But then again, we probably all know that one junk-food extremist who refuses to eat anything fresh on principle.)

According to the study, the number of overwintering white storks in Portugal has gone from 1,187 in 1995 to about 14,000 in 2014 — so if anything, we should be throwing away more garbage!

Er — wait a second. I just got to the end of the study:

The European Union Landfill Directive (1993/31/EC) set targets to progressively reduce the volume of biodegradable municipal waste entering landfills through to 2016. As a result, open-air landfills are being replaced by covered waste processing facilities that are inaccessible to birds. In the immediate future there will be a sharp reduction in the availability of food waste that will have important consequences for Iberian white storks.