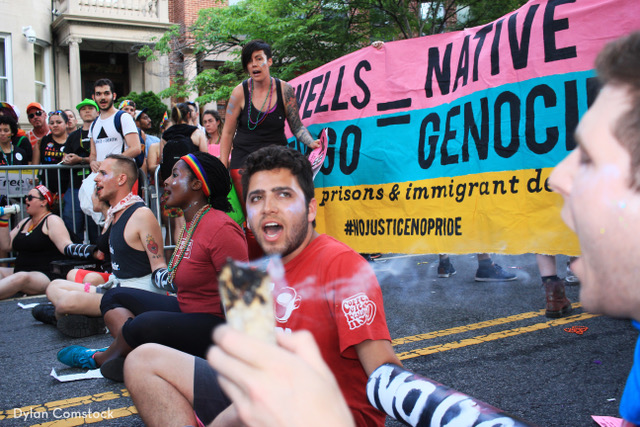 Aletta Brady is a queer writer, organizer, and strategist from Minneapolis, Minnesota; the founder and executive director of Our Climate Voices; a member of the U.S. National Commission for UNESCO's Youth Working Group, and a former Fulbright research fellow in Jordan.

Anthony Torres is an organizer and strategist focusing on how we tackle our crises of climate change, inequity, and democracy. He is originally from Long Island, New York, and has been featured on the Grist 50 and as a Brower Youth Award winner.

Phillip Brown is a black queer immigrant originally from Kingston Jamaica who centers queer and trans liberation in our collective fight for climate justice, and works to build deep community and coalitions across difference on the local, national, and international level with organizations like the Sunrise Movement and SustainUS.

As queer and trans climate justice advocates, our fight is deeply personal. Our communities, friends, and chosen families are particularly vulnerable as rapid changes in climate lead to more natural disasters, environmental instability, and scarcity. We also share an understanding of how queer wisdom is essential to creating a livable future for all of us.

Trans and queer communities, especially black and brown and low-income queer and trans people, live on the frontlines of climate change. Many young queer and trans people do not have the resources or ability to flee verbal, emotional, and physical violence in their hometowns. Instead, around the world, they are often abandoned by family and forced onto the streets with little to no support to survive.

Consider that 40 percent of U.S. youth who experience homelessness identify as LGBTQ, even though they represent just 7 percent of the population. Moreover, Queer and trans people are concentrated in coastal cities such as Miami, New Orleans, New York and San Francisco at high risk for sea level rise and increasing storm surges. As the planet warms, more frequent and severe storms, wildfires, and floods will exacerbate these vulnerabilities, and our people will be among the first and worst hit.

For an example, look at Jamaica. Many young queer and trans people on the island are put on the streets by their families and forced to live in the gullies and sewers running through the underbelly of Kingston, the capital city. Outside the gaze of the public, black queer and trans youth use the few resources they have to construct makeshift camps. When — not if — Jamaica is hit by a large storm, like Hurricane Maria, which devastated Puerto Rico, the camps will be flooded and flattened by powerful winds, with many young black queer people directly in harm’s way.

We speak from experience: Phillip Brown, a 20-year-old black queer immigrant, and one of the authors of this essay, left their home in Kingston in 2016 after facing violence from their community and fear for their life as the state and public policed how they should exist and perform their gender. After relocating to the U.S., they joined the youth climate justice movement to speak up about the struggles of youth like them, who are often erased and forgotten during moments of crisis.

Climate change compounds the struggles of trans and queer people worldwide. Because of this, we believe that queer liberation must be lifted up as a key principle in climate justice organizing.

We also believe that the queer and trans communities bring something unique to the struggle — and something essential. In response to societies that enforce binary gender roles, expression, and identity, and violently target people who defy these rules, queer and trans people have learned to create our own communities rooted in love and care for each other and the environment around us.

To survive, we have developed resilient and interdependent communities that challenge societal norms that condition us to be individualistic, materialistic, and competitive. Queer communities, excluded from mainstream society, have embraced interconnectedness, open communication, and collaboration. Therefore, LGBTQ activists have always been at the forefront of producing innovative forms of popular resistance, as Anthony experienced when he helped throw a queer dance party for climate justice outside Ivanka Trump’s house.

We know that the climate crisis requires urgent and bold action. We must fight against capitalism and the fossil fuel industry, hold governments accountable, and deliberately organize our communities in a way that fosters local resilience. Climate justice is founded on the principles that we all deserve a planet where we can thrive and be safe. Queer and trans communities embody a model of a world that lends itself well to this vision by creating communities that sustain and celebrate all of us in our authentic being.

Trans and queer activists have already made important strides for climate justice. Anthony Torres (another co-author of this piece) and other activists with #NoJusticeNoPride, for example, disrupted the Capital Pride Parade to demand that we reclaim Pride celebrations from the influence of banks and corporations like Wells Fargo that fund harmful projects such as the Dakota Access and Bayou Bridge pipelines. These projects have been fought against heroically by two-spirit and queer indigenous leaders across the country.

We have also forced environmental organizations to look within. Too often in these organizations, policies and cultural dynamics perpetuate homophobia and transphobia despite public commitment to equity and justice. Anthony is among the LGBTQ members of the Progressive Workers Union at the Sierra Club who fought to have benefits extend to chosen family, to expand the definition of and protections from toxic behavior, and to include gender-affirming care in health coverage.

Recognizing the urgent need to amplify queer and trans voices, youth-led climate organizations like Zero Hour and Our Climate Voices are addressing the intersection of queer and trans liberation and climate justice. (Aletta Brady, also an author of this piece, and Phillip Brown, host Our Climate Voices’ new Listening Series on Climate Justice & Collective Liberation.)

If we are to truly meet the twin crises of inequity and climate change, we need the climate movement and the queer liberation movement to center our siblings who are fighting on the frontlines. Organizations that are serious about climate solutions for all must lift up queer and trans people and the work that we’re already doing to build power and solutions that safeguard us from environmental, familial, and state violence.

In order to achieve safety and justice for our community, climate justice must be realized. In order for climate justice to be made real for all of us, our liberation must be lifted up in movements that set out to tackle this crisis.