Hey y’all! We’ve got some MEGA EXCITING news to share about our next book club (hint: another special guest will be joining us). Read on for the deets, and don’t forget to RSVP! 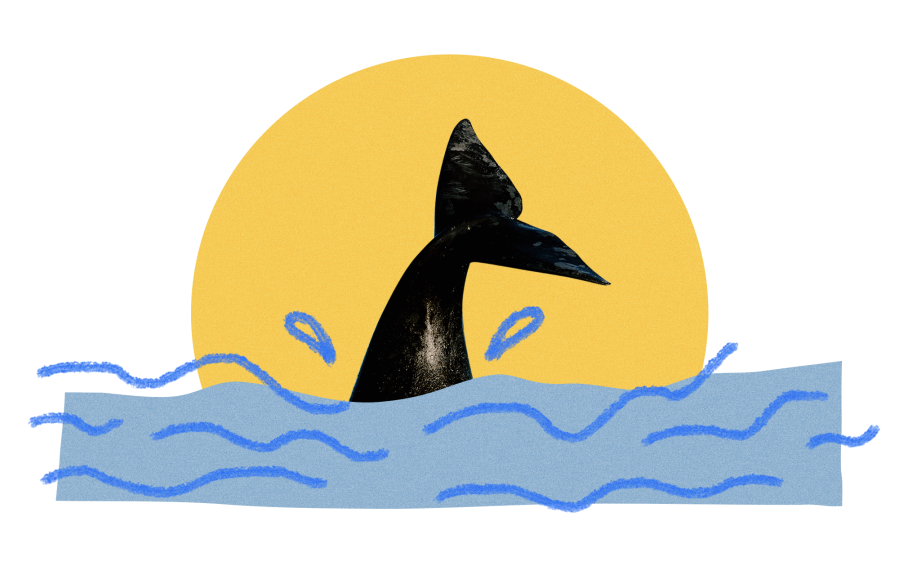 The fading golden-hour sun warmed the sand. The young boy squidged it between his toes as he walked along the shoreline. He paused to pick up an empty mussel shell, tossing it into the air. Suddenly he heard a thunderous splash. His eyes darted upward and met the horizon.

“Look! I saw its tail!” he hollered to his grandfather, who sat on the sand behind him, eyes closed, breathing in the salty breeze. The old man inhaled deeply. He opened his eyes and smiled, silently thanking the creatures for the clean air.

— a drabble by Avery Schuyler Nunn

On the coast of Massachusetts, lifelong whale enthusiast, veterinarian, and biologist Michael Moore awaits his 5:30 a.m. confirmation text messages. “The weather looks good today,” one reads. “Alright, let’s head out there!” states another. Up before the sun, Moore leaps out of bed to converge with his team and board a 30-foot vessel to set off for the open ocean.

Moore has spent most of his life studying North Atlantic right whales, and working to ensure their protection. He has clambored into their carcasses for research. He has photographed them in the southern hemisphere. He has heard the deep whispers of their songs in his sleep.

In the 1960s, sub-aquatic recording equipment captured humpback whale songs for the first time, and humans were given a profound glimpse into life beneath the surface. The recordings made waves around the world, sparking the “save the whales” movement.

But “saving the whales,” which has become something of a punchline in the modern climate movement, might be making a comeback — not just as an altruistic effort to protect the largest animals on earth, but as a climate solution.

Even the smallest of cetaceans can live to be 70 years old, though some research suggests that whales of the Arctic regions can live for up to 200 years. Throughout their long lives, they accumulate massive amounts of carbon within their bodies. As they feed on krill, which consume phytoplankton, the leviathans absorb carbon from the surface layers of the ocean. When they die, their carcasses typically sink to the sea floor, carrying up to 35 tons of sequestered carbon to the depths, where it remains for centuries.

Moreover, whale excrement fertilizes the ocean, producing large phytoplankton blooms which extract atmospheric carbon. These microscopic beings contribute at least 50 percent of all the oxygen in our atmosphere, and capture up to half of all anthropogenic CO2.

But a majority of whale populations have been steadily declining since the 19th century. Most nations have long since banned whaling, but the animals face the constant threat of collisions with ships, entanglement in fishing nets, and debilitating noise pollution. Climate change has created new threats and exacerbated old ones, as warming seas force the animals into unfamiliar waters where they suffer ever-more vessel strikes and entanglements. In some cases, anthropogenic interferences such as noise pollution and ship traffic will cause whales to flee to the beaches — where their washed up remains release the sequestered CO2 back into the atmosphere.

The solution? Protecting the whales, so that they can continue to protect us.

“Whales are ecosystem engineers who regulate the carbon pump in the ocean,” says Adam Ratner, associate director of conservation education at the Marine Mammal Center in Sausalito, California. “With whale conservation and climate, it’s really a win-win.” 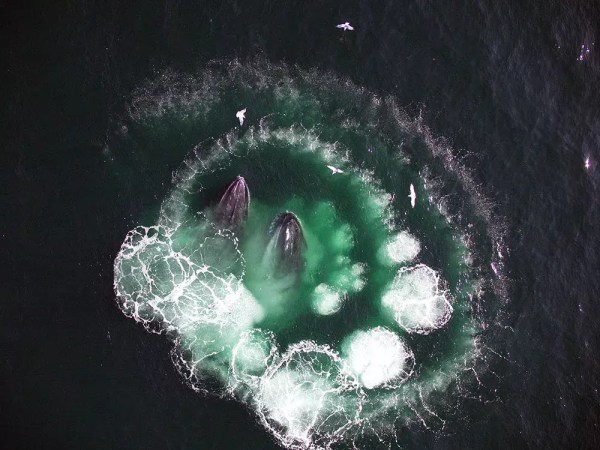 For Moore, understanding the path to restoration of the endangered North Atlantic right whale is the priority. Their population was severely depleted by commercial whaling and, despite protection from commercial harvest since 1935, it has not recovered. Today, just 350 remain, with fewer than 70 being reproductive females — a number that has them approaching extinction.

“It’s very worrying to have them all in one area,” says Moore. “They’re at the last feeding trough of a decaying system — the concern is that their other optimal feeding habitats are no longer optimal.” Moore and his team are studying the whales’ respiratory microbiome (the presence of bacteria, fungi, and viruses), which reflects not only the health of the whales, but the health of the ecosystem they inhabit. This information could help to direct targeted restoration efforts.

NOAA recently proposed a rule to reduce boat speeds in certain areas, to decrease the number of vessel strikes affecting right whales. The agency also released guidelines governing the use of ropeless fishing gear. Such efforts aim to mitigate the human impact on right whale populations without sacrificing the livelihood of fishermen and the economies of communities that rely on them.

Others around the country and the world are working on protecting whales and their habitats from other threats. In the Northwest, Whale and Dolphin Conservation is taking action to increase prey abundance and reduce noise disturbance to the local orca population by removing dams on the Klamath and Snake Rivers, which have been limiting salmon spawning, a crucial food source for the creatures at sea.

Whale restoration is one example in a suite of nature-based solutions taking off within the climate movement. Things like wetland restoration, forest regrowth, and regenerative agriculture practices are other cases in which conserving, restoring, or better managing ecosystems can mitigate carbon. But like any solution, nature-based approaches have limitations. It’s estimated that these methods alone can contribute about 20 percent of the mitigation needed to keep global warming below 2 degrees C — no replacement for the decisive phaseout of fossil fuels. And in some instances, the formation of newly protected areas has pushed Indigenous and local communities off their land or prevented them from accessing resources.

When it comes to whales, any effort can benefit ocean and planetary health. “Simply allowing them to recover to their pre-industrial whaling population numbers in the ocean can really help regulate the climate,” says Ratner. “The more that we’re able to protect them, the more excess carbon dioxide will be taken out of the atmosphere.”

And for fans of the big, beloved cetaceans, there’s reason to be hopeful. As of this year, the global humpback whale population — which, pre-whaling, was estimated to be over 125,000 — shifted in categorization from endangered to threatened, rebounding from a low point of 10,000 in 1966 to nearly 80,000 today. That growth means eight times the underwater symphonies — and eight times the carbon storage.

Today is the last day to enter the giveaway for a free copy of our next book club book, The Ministry for the Future! We’ll contact the five winners of the draw tomorrow. To enter, just hit “Yes! I want a chance to win the book!” when you RSVP for the discussion.

Oh, and did we mention we have some MEGA EXCITING NEWS to share? Drumroll, please. The illustrious author himself, Kim Stanley Robinson will join us for the discussion!!! Kim! Stanley! Robinson!

As a reminder, the event is January 18, at 6 p.m. ET. We’ll start with a moderated Q&A with Robinson to discuss his work and some key themes from the book, then head into breakout rooms for more discussion with the Looking Forward community. If you haven’t yet, go ahead and smash that RSVP. We can’t wait!

Check out this glamor shot of a humpback whale “dancing” beneath the surface. 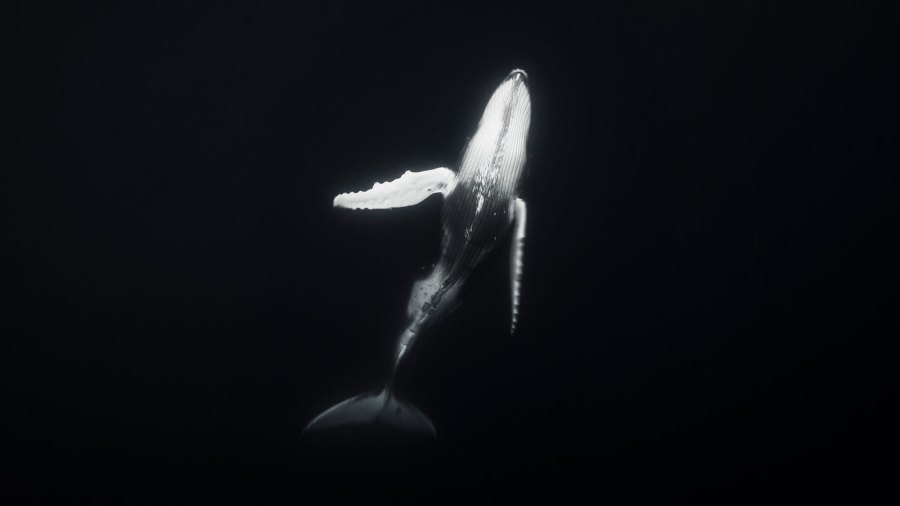