The unsung hero who saved a Florida beach 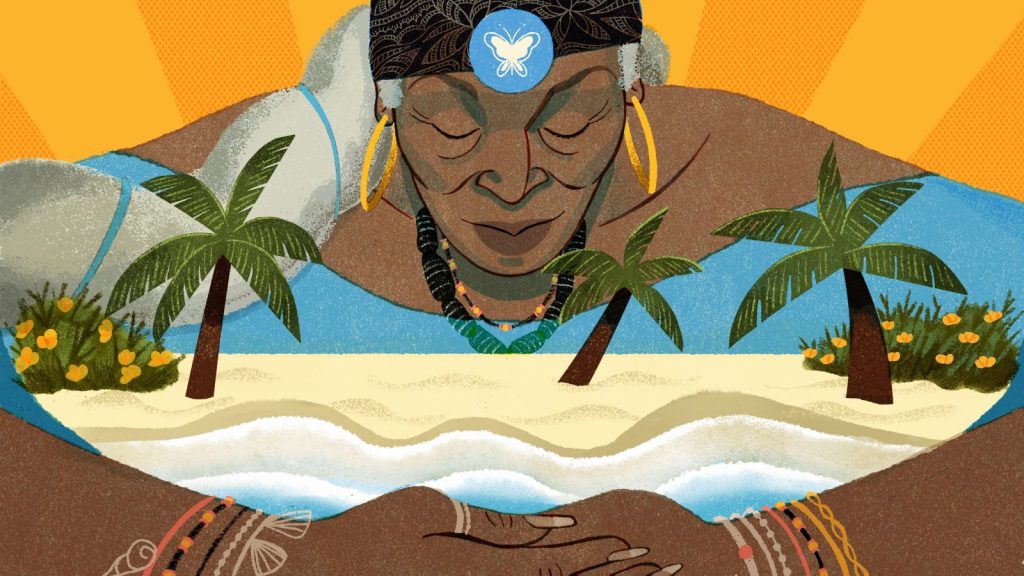 The unsung hero who saved a Florida beach

The fact you don’t hear MaVynee Oshun Betsch mentioned alongside conservationists like John Muir, Aldo Leopold, and perhaps Rachel Carson says more about who we enshrine in history books than Betsch’s remarkable contributions to the environmental movement and her valiant campaign to save a landmark of Black history.

Betsch was born in 1935 to wealth, and embarked on an international career as an opera singer before returning to her Florida hometown and donating most of her fortune to a long list of environmental causes. But even that pales alongside her dedication to preserving American Beach, a dune-dappled stretch of sand 40 miles northwest of Jacksonville that was among the most popular vacation spots for African Americans during the Jim Crow era.

American Beach is not unique in serving those who were barred by law or by custom from recreation opportunities others took for granted. Black beach communities sprang up in coastal areas nationwide during the first half of the 20th century, with notable examples in Sag Harbor on Long Island and Oak Bluffs on Martha’s Vineyard. Yet despite the fact such places are significant to Black history, there’s been little effort to preserve them.

“Virginia Key Beach [in Miami] was the beach for Black people,” says Zelalem Adefris, a 2020 Grist Fixer and vice president of policy and advocacy at climate justice org Catalyst Miami. “Today, there’s a big garbage dump there, which just goes to show how these places can be treated and why the conservation of something really beautiful is so important.”

Betsch had deeply personal reasons for defending American Beach against developers and others who considered it a place to be exploited, not preserved. Her great-grandfather, Abraham Lincoln Lewis, was instrumental in its founding in 1935. He also cofounded the Afro-American Insurance Company, an endeavor that made him Florida’s first Black millionaire. Lewis created the beachside community as a resort spot for his employees and other Black families who were not welcome elsewhere. Celebrities like Duke Ellington, Ray Charles, Joe Louis, and Zora Neale Hurston joined countless others in crossing the segregated South each summer to relax along the shore.

Betsch, who was born in Jacksonville, spent much of her childhood there before leaving Florida as a teen to train as an opera singer at Oberlin Conservatory of Music in Ohio. That led to performances throughout Europe and a promising career. She was singing abroad when Hurricane Dora leveled much of American Beach in 1964, which, ironically, was in an economic slide that started with the decline of segregation and the rise of the civil rights movement. “The whole economic skeleton of the black community, so painfully erected in the face of exclusion and injustice, collapsed as that exclusion was rescinded,” the journalist Russ Rymer, who befriended Betsch, wrote in American Beach: A Saga of Race, Wealth, and Memory.

Despite the glamour of her budding career, something called Betsch back to the beach. “It was like something in my brain just went …” she told Sierra magazine in 2005, snapping her fingers for effect. “There were herons. The ducks would come in November. I read every book about birds I could find. I went berserk.” Beyond the birds, Betsch grew obsessed with preserving Nana, the tallest dune on Florida’s east coast. By the time Betsch returned to Jacksonville in the 1960s, American Beach was showing its age, its permanent population dwindling and its once-busting nightclubs and restaurants boarded up.

Some may have thought her odd, even eccentric, but no one underestimated Betsch’s dedication to preserving American Beach.

In 1975, Betsch moved into her grandfather’s beach house and started her second career as an activist and preservationist. She allocated her entire inheritance and all of her income to preserving American Beach, donating liberally to organizations like the Xerces Society, which underwrote creation of the Red Data Book for invertebrates — the most comprehensive accounting of threatened invertebrate species to date. She became a lifetime member of 10 environmental organizations and at one point belonged to more than 50, according to Sierra.

Betsch eventually sold the family home and took to sleeping in a chair on the beach. She became known as the Beach Lady. She wore her hair in an enormous lock that stretched to her ankle and sported 18-inch nails on the fingers of her left hand. She also added an “E” and dropped the “R” in her birth name of Marvyne to protest the Reagan Administration’s environmental policies. Given that she was 6 feet tall and bedecked in shells and stones from the sea, Betsch cut quite a figure.

Some may have thought her odd, even eccentric, but no one underestimated her dedication to preserving American Beach. When developers came knocking in the 1990s with plans for an exclusive community, Betsch redoubled her efforts. She was largely successful, too: The National Park Service added American Beach to its National Register of Historic Places in 2002. One of her pet projects, a museum preserving the legacy of American Beach, opened in 2014.

Betsch died of cancer in 2005 and has largely faded from history. That is so often the case among those who dedicate themselves to helping others, but it in no way diminishes her contributions.

“I think a lot of people go unnoticed for their amazing work in preservation and social justice, especially Black activists,” Adefris says. “But their impact speaks to what people, when they follow their passions, contribute to the movement to support their communities and their neighborhoods.”

This is the second in a series of posts honoring the overlooked legacies of Black environmentalists from the past. You can read more here and here.