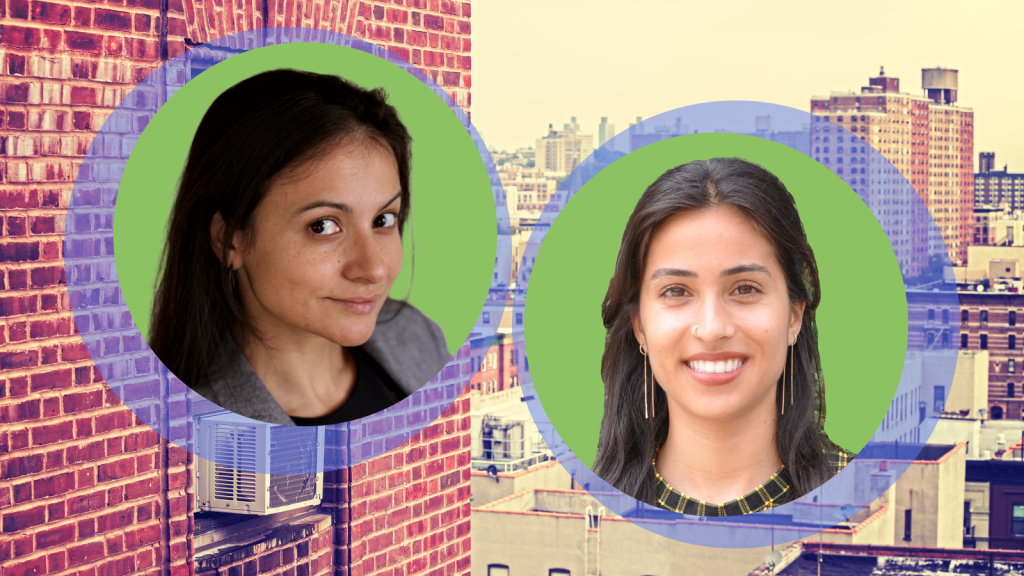 In honor of Climate Week 2020, Fix hosted an Instagram Live conversation with Sonal Jessel, policy and advocacy coordinator for the Harlem-based watchdog organization WE ACT for Environmental Justice, and 2019 Grist 50 Fixer Julia Kumari Drapkin, CEO and founder of the storytelling platform ISeeChange. The two discussed what they do, from shaping policy to telling stories to collecting data, and how their work addresses the deadliest natural phenomenon: extreme heat.

Heat is one of the most nuanced and least visible manifestations of climate change. Solutions to the dangers of extreme heat emerge by addressing housing, health, income inequality, and other social issues — as Drapkin and Jessel know from their work on the ground in New Orleans and New York City.

Read on for highlights from their fast-paced, smart conversation, and check out the full video here.

The following excerpts have been edited for clarity and length.

When ISeeChange started working on what we call community investigations, WE ACT for Environmental Justice in Harlem was our first partner. We worked with WE ACT to install heat sensors inside people’s apartments. We knew from satellite data that there was an urban-heat impact in Harlem. But here’s the thing about sensors and satellites: They can’t tell you everything. They cannot provide the granular data we need to actually make changes that really impact our daily lives. So we had residents also telling their stories on ISeeChange, and we synced their stories to the sensors.

We started seeing relationships between what the sensors were telling us and these stories. All together, in partnership with AdaptNY, CUNY, and WE ACT, we ended up modeling indoor urban heat waves and found that they behave very differently than outdoor heat waves.

Jessel: The Harlem Heat Project was one of WE ACT’s first strategic projects related to extreme heat. It’s a rising issue in New York City. We’ve always had hot, humid summers — that’s something that people are kind of used to. But this level of extreme heat, the number of heat advisory days this summer, was unprecedented.

What the Harlem Heat Project showed us is that people suffer inside of their homes. Even though the temperature may say that it’s 70 degrees outside at night, people are still suffering in their homes.

People of color and lower income communities in New York City — especially in this time of COVID-19 and with the uprising that’s been happening in the past couple of months — people don’t always feel very safe outside. We always need to make sure that when we’re addressing climate issues, they’re intertwined with other social-justice issues, other hardships that people are dealing with. And that’s why we have moved forward with a big heat health-equity initiative that’s really about making sure people are safe in their homes. Because otherwise, what do we have, right? Cooling your house down should not be a luxury.

So we have people staying in hotels, we have people who are getting evicted, because they withheld rent just to get their landlords to put in ACs. The home and the climate crisis are absolutely related. We can see these daily life experiences in relationship to each other.

At ISeeChange, we work on climate across all sorts of impacts — coastal erosion, drought, wildfire, air quality. But heat is the one that is the trickiest, because it’s an invisible thing that you feel. I can get thousands of people to take pictures of flooding. But when I say, “Hey, how is heat impacting you?” it is a very messy engagement. Everyone is impacted differently. For some people, it is life and death. For others, it’s about our daily experiences. Maybe you can’t bike in certain areas of your city because there’s no tree coverage. I have talked to people who’ve been walking to the dollar store and broken down in the street just crying because it was so hot.

Those are all related experiences, and we need to kind of juxtapose them together to understand the bigger picture trends, day to day, season to season, year to year.

Jessel: We absolutely need collective action for something like extreme heat. And a lot of that is because places like New Orleans and New York City are so culturally diverse. Different pockets of our communities react and also envision different solutions for the problems. So you need people from many different pockets of the world to contribute to this issue. And that’s kind of what makes it an exciting issue to work on. Obviously, I wish it wasn’t an issue — you know, we’re going to try to work our way out of jobs!

Drapkin: That’s a great idea. I would love for climate change to be solved so I could sit around and write sitcoms. That would be awesome!

Jessel: Yeah, we could just read books and lie around. But WE ACT is working on the forefront of a lot of really major energy-efficiency bills. Last year, New York state and New York City passed seminal, globally renowned bills requiring buildings to reduce emissions by a lot, very quickly. And that is actually really important for heat — because the way that building owners have to react to those laws is essentially to implement better cooling systems. So when these buildings actually turn over and become more energy efficient, it’ll be much easier to also regulate heating and cooling in people’s homes. It’s not only important for climate change and reducing emissions, it’s actually going to be so much easier to protect people’s health.

Drapkin: Absolutely. That’s super smart. I think those of us who work around climate change, ultimately, are optimists. Because we know it can be done better. There are always better solutions.