We’ve got a lot to learn from the natural world. After all, humans are far from the only species that has shown resilience in the face of extreme heat. Creatures ranging from Australia’s night parrot, a desert-dweller evolved to be nocturnal, to the Dorcas Gazelle, which conserves water by not peeing, have survived in intensely warm environments for millions of years. Why not take a page out of their book?

Perhaps the most famous example of nature-inspired architecture comes from Mick Pearce, a Zimbabwean architect whose designs model termite mounds. Termites might not be the most majestic creatures, but they build impressively tall skyscrapers — towers of dirt that can top 30 feet. (If humans built a tower the same number of times our height, it would top out around 3,600 feet; the world’s current tallest building, the Burj Khalifa, is around 3,000 feet tall.)

Around the same time Pearce was commissioned to design the Eastgate Center, a retail and office building in Harare, Zimbabwe, he spotted some termite mounds on a golf course, dappled with tiny holes. “I thought, it must be the optimum shape and form for using the natural forces of the climate, and this is where we’ll save a lot of energy,” he recalled on a recent call.

Pearce said the insects’ work served as a “metaphoric model.” At the time, scientists were still learning about termite architecture, but he suspected that chimneys in the top of the mound circulate hot air through its top, while cool air remains in the bottom of the mound, where the queen hangs out. (Subsequent studies have confirmed his hunch.)

Pearce took that idea to his team of engineers, and they incorporated the termite mound design into the new building. The end result is two towers connected by an atrium. At the bottom of each tower is a small arsenal of fans that push cool, ground-level air upward through a series of ducts. That also moves hot air from each floor upward through the building’s chimneys. Pearce used similar termite chimney-inspired designs in a Melbourne office building and a dining hall in Shenzhen, China.

In another homage to nature’s smart engineering, Pearce included jagged stone details on the building’s facade, meant to emulate the prickles of a cactus. Pointy surfaces have a greater surface area than a typical flat glass, brick, or stone exterior, so they absorb less heat. They bleed off heat more easily, too, keeping Eastgate cooler than your average building.

The practice of emulating biological forms or processes in human design and engineering is called biomimicry, and we’ve only just begun to tap the potential. 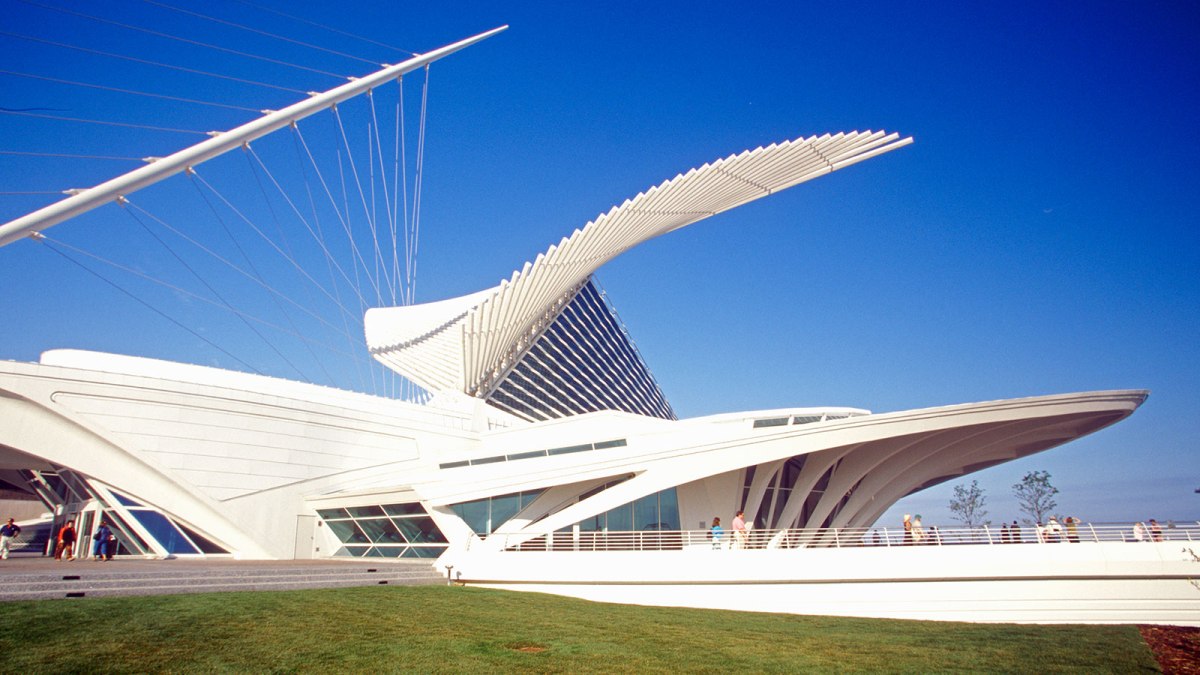 Another practitioner of biomimicry is Pravin Bhiwapurkar, a professor of architecture at the University of Cincinnati. Bhiwapurkar and biologist Daphne Fecheyr-Lippens took inspiration from two heat- and humidity-resilient creatures: the African reed frog and the Hercules beetle, species that are able to modulate their skin layers in response to temperature or humidity changes.

The reed frog is usually grey or beige, but in hot weather, its skin color changes to white to reflect as much light as possible away from its body. Similarly, the Hercules beetle’s outer layers adapt to its environment; in humid weather, a layer of pores beneath the skin absorbs moisture from the surrounding air.

“What they’re really doing with these strategies is not allowing heat to get into the body, not letting body temperature go up, or managing moisture levels,” says Bhiwapurkar. “We thought, maybe we need to look at the behavior of buildings themselves.”

Setting up monitors and experiments on an actual building is expensive and disruptive, so the duo opted for a model instead. Using an average three-story office building in Chicago as an example, Bhiwapurkar and Fecheyr-Lippens simulated how much energy the building could save if it were outfitted with a heat-reflecting exterior like the African reed frog’s, and a hydrogel layer in the building that absorbs moisture, like the Hercules beetle.

“We were able to save a lot of energy; an air-conditioning system doesn’t have to work that hard,” says Bhiwapurkar. According to their model, that Chicago office building could reduce its air-conditioning energy use by 66 percent with these modifications.

The next challenge is getting these technologies on the market. “Most of these materials exist only in labs and are custom made — it’s not really commercialized yet,” says Bhiwapurkar. And even after the materials become more widely available, there’s another hurdle in encouraging engineers and architects to embrace them.

But there are plenty of other ways to incorporate nature’s beauty and processes into design, and biomimetic principles already appear in buildings across the world. The Spring Mountains Visitor Gateway in Nevada’s Humboldt-Toiyabe National Forest contains radiant heating and cooling tubes, designed to emulate the large ears of its desert neighbor, the Black-tailed Jackrabbit. Other architects have highlighted nature’s beauty — from lotus petals, to towering tree trunks, to graceful bird wings, clam shells, the Venus’ flower basket sea sponge, and even the Fibonacci sequence — in their designs. 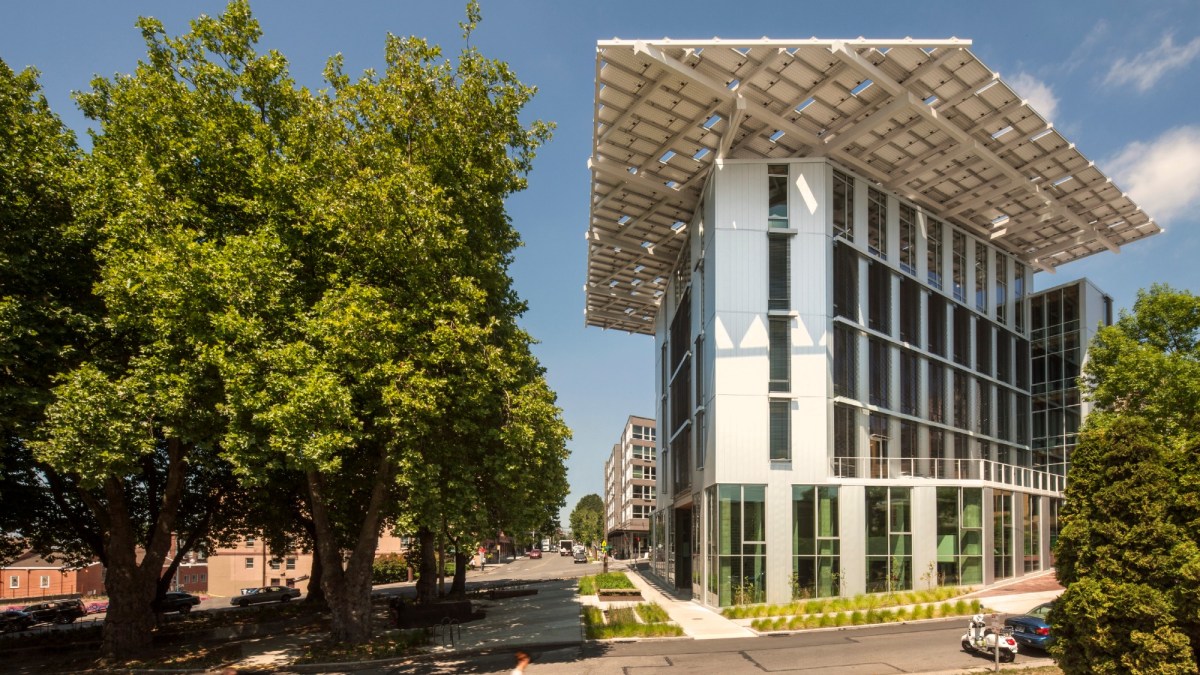 The Bullitt Center in Seattle is shaded by a canopy of solar panels. c/o the Bullitt Foundation

All this wizardry comes with its own set of challenges, of course. Even after innovative, self-cooling designs are in place in buildings, energy savings still require continued vigilance from building managers and tenants. “The agents of change are the ones who actually live in the building,” says Pearce.

His Melbourne building was designed to save 85 percent of the energy used in a typical office, but it actually saves more like 65 percent, he says, because it’s not managed in the most efficient way.

And in a climate-changed world, we worker bees may also need to do a little adapting of our own, says Justin Stenkamp, an engineer at the consulting firm PAE. After PAE helped design the Bullitt Center, a state-of-the-art sustainable building in Seattle (also built using biomimetic principles), the firm moved its own office into the building. Stenkamp recalls how his first days in the new homebase were warmer than he was used to, and he was amazed to hear a colleague going on about how comfortable he was in the warm weather.

“When he walked away, I noticed he was barefoot, so I took my shoes and socks off, too, and I immediately felt better,” he says.

PAE’s office now maintains a policy allowing employees to wear shorts if temperatures top 80 degrees. “There are ways you can interact with your environment to make it more comfortable,” says Stenkamp.

Bhiwapurkar agrees. “What I appreciate in these organisms is their natural adaptability,” he says. “That is something we can learn from.”

The Future of Cool