Anna Claussen grew up on a family farm 20 miles outside of Benson, Minnesota, a town of just over 3,000 souls. She left the farm when she was 18 to pursue her undergraduate degree on the outskirts of Minneapolis, and has lived in the city since. Making that leap, from rural to urban, it didn’t take her long to notice the stereotypes.

Claussen’s family story is unusual: While family farms dwindle due to the rise of industrialized agriculture, a challenging financial climate, and extreme weather events, her parents and two of her three brothers have stayed put. They steward the land, show up for their neighbors, and make a multitude of challenging decisions to do best by the farm, their family, and the future. To create opportunities for the next generation to stay in farming, they’ve added new crops and invested in livestock and ethanol cooperatives.

But no one in Minneapolis ever asked Claussen about all that. When she talked about growing up on a farm, the first question she’d get was often, “How big is your family’s farm?”

“I’d tell them around 3,000 acres and the conversation would stop or shift,” she said. Three-thousand acres seemed large to many of them, so they assumed her family to be an enemy of sustainable farming. “They wouldn’t see my father or brothers beyond a number.”

Claussen saw similar attitudes toward other rural Americans, especially when it came to people’s beliefs, or assumed beliefs, about climate change. “There is a common misconception that you can’t talk about climate change in rural communities,” she said. But it’s simply untrue. “As I sat with what people were saying, I saw that the root of the problem was a lack of understanding and opportunity to meet.”

So in 2018, Claussen started Voices for Rural Resilience, an organization that brings rural people into the conversation by identifying local climate-related problems and creating their own solutions. This ultimately helps them raise their own voices with effective and democratic purpose, she said, countering stereotypes and bringing nuance into the climate dialogue at a time when it is badly needed.

“Rural people are overlooked in a national narrative, making them feel like they’re lesser,” Claussen said. She is determined to change that. 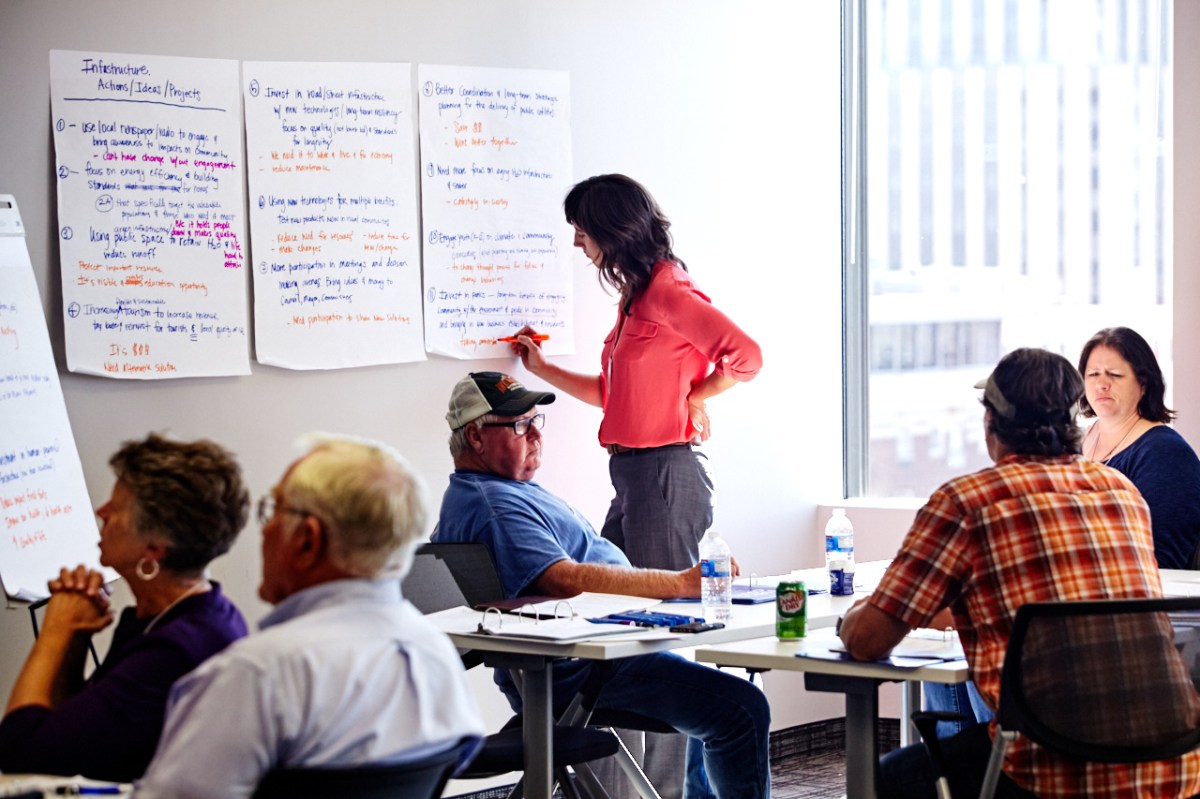 Claussen is no stranger to life’s constant tensions. She’s an urban dweller with rural roots; she’s the daughter of farmers who grow crops conventionally on 3,000 acres, yet also a proponent of sustainable agriculture; and she’s a self-professed tomboy who’s also a mother.

“At times, my complexities make me feel torn and conflicted,” she said. “I’ve successfully embraced my own complex identities — the labels society sees as incompatible — by leaning into and relying on empathy.”

That may help explain why she is so good at seeing the nuance and the complexity in small-town America.

Although less than 20 percent of the U.S. population lives in rural communities, according to the U.S. Census Bureau, they live and work across 97 percent of our country’s land mass. Almost all of the nation’s energy and food is produced in rural landscapes, which are rich with natural resources essential for our survival and critical in addressing the climate crisis.

We miss out on a significant opportunity when we assume rural people are “the enemy,” Claussen said. She argues that rural work often strengthens people’s connection with nature and stokes their desire for more environmental protection.

You don’t need to take her word for it. Polls show that the overwhelming majority of Americans believe in climate change. That includes folks who live in rural areas in states as diverse as Louisiana and California. A group of researchers at Yale found that more than 6 out of 10 Trump voters believe in taxing or regulating pollution.

“Conversations around climate change don’t have to be polarizing and divisive,” Claussen said. 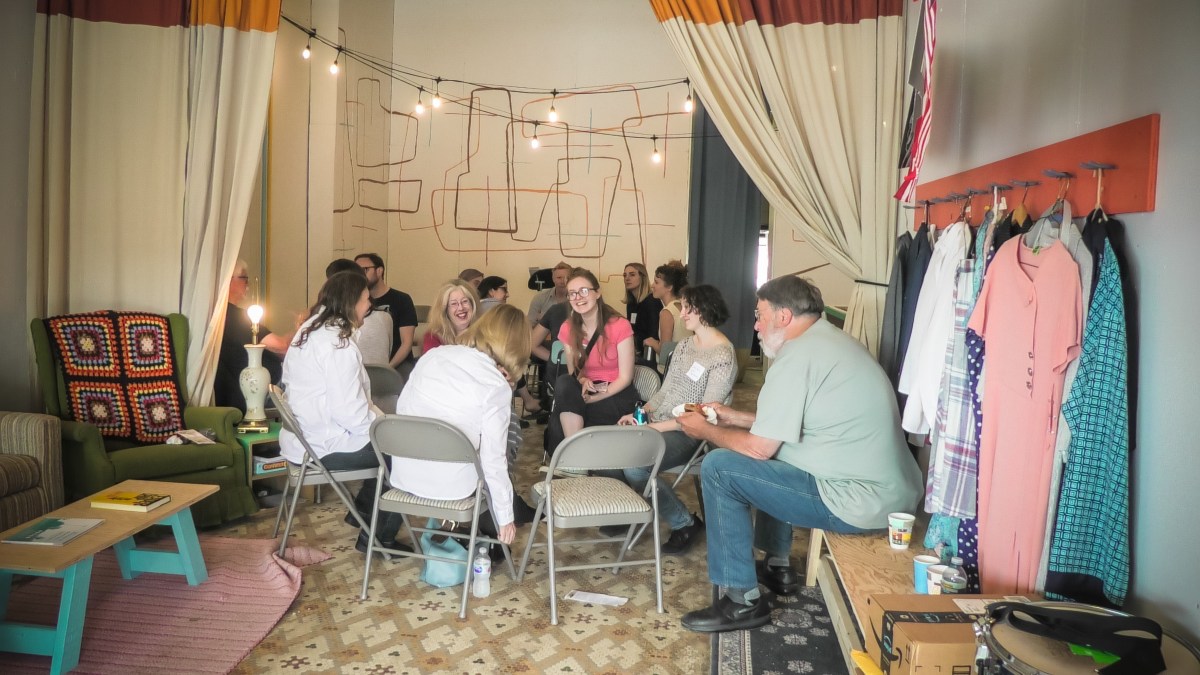 At the YES! House in Granite Falls, Civic Saturday guests discuss their suppressed identities over coffee and between song and poetry. Bethany Lacktorin

Take, for example, Morris, Minnesota, a town of just over 5,000 people about a three-hour drive west of Minneapolis. In 2014, Claussen led a “Rural Climate Dialogue” that engaged more than 300 people in Morris. She describes the dialogue as a “a 3-day intensive experience that mixes facts and testimonies with their deeply personal beliefs, experiences, and emotions.”

The dialogues, co-founded by the Minnesota-based Jefferson Center and the nonprofit Institute for Agriculture and Trade Policy, bring residents together to identify opportunities to reduce carbon emissions and make progress toward healthy, sustainable, and prosperous communities. These solutions are then presented to local, state, and national policymakers.

Blaine Hill, Morris city manager, says he was interested in the dialogue because it was an opportunity to bring local voices into a conversation that was happening in the government and at universities. Rural communities got left behind in the electrification of America, Hill said, and then again during the high-speed internet revolution. He doesn’t want that to happen again.

“The future is not going to be coal,” Hill said. “It’s going to be the production of sustainable and renewable energy, and we have the capability here where we live to do it.”

The dialogue was also a chance to talk about solutions instead of getting into polarizing debates. “You don’t have to sit in a meeting room and argue about whether there’s climate change that’s happening,” Hill said. “We don’t focus on the words ‘climate’ or ‘environment’ because it’s not necessary, and sometimes it gets in the way of what we’re actually trying to do.”

The town used the dialogue to engage residents in a conversation that was already underway about sustainability and renewable energy — and it worked. A survey conducted with the University of Minnesota found that participants left with a deeper understanding of climate change.

“I have to admit when I came here when people talked about climate [change] I thought ‘Oh, come on,’” wrote one participant in a post-dialogue survey (the respondent’s names were kept confidential to protect privacy). “But I did learn a lot and I am grateful.”

And knowledge, as they say, is power. 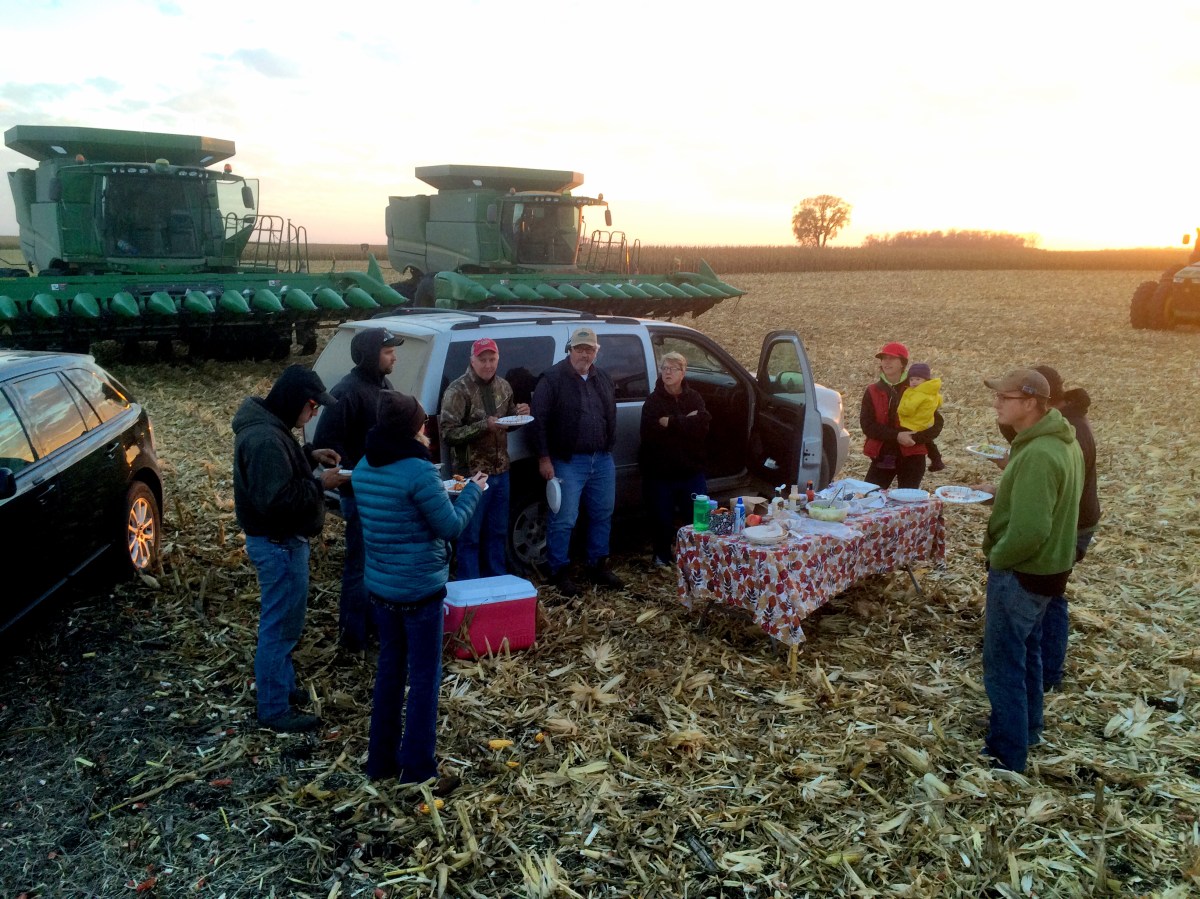 The community’s ongoing conversation about climate change has led to an initiative called the Morris Model, designed to reduce the town’s emissions and support climate adaptation and resilience projects. They’ve even established a three-year partnership with a small town in Germany, called Saerbeck, to share insights and solutions with each other.

This year, Morris replaced its 450-watt streetlights with energy-saving LED bulbs and installed electric vehicle charging stations, including one behind Morris City Hall. Around town, solar farms are popping up. Rebecca Michael, a representative from the area’s Otter Tail Power Company, said there are plans to install about 250 kilowatts of solar energy near Morris over the next few years.

“We are a small rural town and we’re able to do things here that are going to be renewable and sustainable for the future,” Hill said. “If we can do it, then anyone can do it.”

Claussen has led other dialogues around Minnesota, including a statewide dialogue that brought three rural communities together. The key to doing this work well is fostering empathy, she said. This means asking questions before making judgments, focusing on the issues and solutions instead of just personal identities, and countering stereotypes. This means seeing the grit, determination, and real, on-the-ground progress that is coming from communities like Morris.

“When people are empowered with locally relevant knowledge, resources, and tools,” Claussen said, “they move to action.”