We obliterated a freeway -- imagine what else we could do 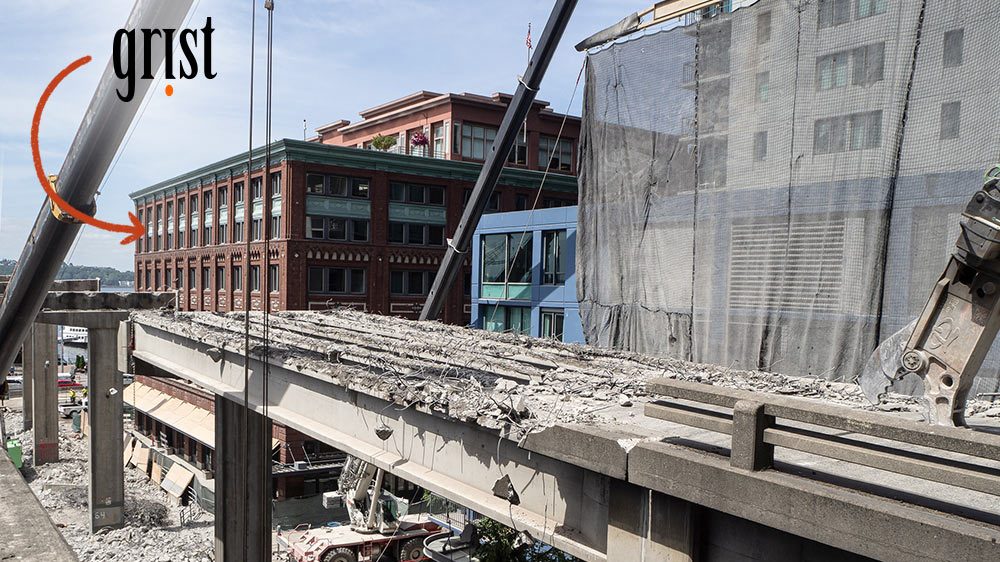 We obliterated a freeway — imagine what else we could do

Over the past few weeks, the crew at Grist’s Seattle HQ has gotten a fresh look at this city, thanks to the demolition of an elevated freeway called the Alaskan Way Viaduct.

The viaduct, built in 1953, ran right along the city’s waterfront (because, you know, cars love a good view). The highway was a huge earthquake hazard that packed the area with noise pollution and traffic fumes, and made it miserable to even get to the water on foot. If that weren’t enough, the damn thing blocked the view from our office!

What’s been striking about the demolition — other than the headaches induced by unworldly concrete-smashers — is just how much we can see from the office window now that the viaduct’s gone. We can see CenturyLink field, where the Sounders (and Seahawks) play. We can see the Starbucks HQ. We can see a whole lot of water. We can see Russia, probably.

We can also see all sorts of possibilities. If we can tear down a freeway, what could we do with that pay-by-the-hour parking lot across the street? What about covering each building downtown with a rooftop farm? Why isn’t every city pothole a garden — or a spaghetti dish?

Walking along the waterfront, free from the viaduct’s looming concrete shadow, I can’t help but wonder what other opportunities exist out there past the edges of our imaginations.

In this edition of Shift Happens, you’ll find examples of people who are looking beyond the sometimes grim scene in front of us to imagine what a better world might look like.

Grist 50 Fixer Omar Hakeem knows a lot about getting people to envision a better world. The architect’s initial interest in sustainable design came in the aftermath of Hurricane Katrina, when he went to New Orleans to volunteer and realized that skills like his could be put to good use.

Now the design director of buildingcommunityWORKSHOP, Hakeem is creating community-led designs for bike and pedestrian infrastructure that works, green affordable housing, and structures that can provide shelter for residents the next time disaster strikes. It’s all about creating communities that are better, more sustainable, and prepared for the natural disasters that climate change is hurling our way. Smart!

I had a chance this week to catch up with Amanda Little, a former Grist staffer and current journalism professor who just came out with a new book, The Fate of Food. 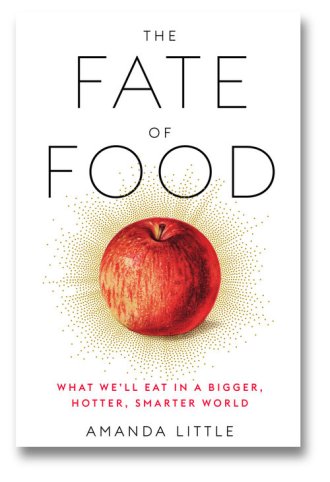 Despite her natural sympathies to the slow-food movement, Little came to conclude that farmers markets and CSAs do not constitute a successful recipe for feeding the planet. Her journey over five years and to 12 countries opened her up to a world of solutions she couldn’t previously have imagined.

Below are a few snippets of our conversation. Find a longer version here.

Q: Why this book?

A: The central question I was asking is, how do we feed a hotter, more crowded world? But the question kept leading to other questions, like, are we facing the end of animal meat? And will we need to use GMOs and gene-editing tools to help adapt to these environmental pressures? Can we build a drought-proof water supply? How do we get chemicals out of the food system? How do you make sustainable food not elitist?

Q: You’ve said you can’t shake meat in your own diet. What will be on your dinner plate in 30 years?

A: I’ll be eating things that taste familiar, but they will have been grown with radically different methods. I think I may have a beautiful roasted turkey for my Thanksgiving in 2050, but that might be the one animal-derived meat that I have all year. Otherwise, the meat that I feed my family will come from plant proteins or from a lab.

Q: You visited a lab where they’re growing meat tissue. Did that gross you out?

A: It’s so much more unsettling to think about what happens in a slaughterhouse — not just the actual animal slaughter, but the contamination of meat, the environmental implications of growing that meat — than it is to think about growing tissues in a sophisticated crockpot.

Q: You write about finding a “third way” (sounds so Clintonian!) that incorporates traditional farming practices and futuristic-seeming tech. Is there such a thing?

A: The most exciting new approaches to food production have a deep reverence and deference to traditional approaches to agriculture. In fact, technology can be used not to destroy sustainable food systems, but to support and elevate them.

Herewith, a how-to on demolishing your own unsightly freeway.

I kid! Don’t do this! (And if you do, don’t say I put you up to it.) If you’re actually serious about getting rid of a freeway, a better first step would be to help folks imagine how life could be improved without it. And there’s no one who’s better at helping people dream big than artist Candy Chang.

Chang is probably best known for her project “Before I Die,” in which she stenciled those words, followed by a blank space, about a thousand times across the side of a derelict house in New Orleans. She left chalksticks next to the wall, and let residents finish the thought, with some really profound results.

Chang specializes in this kind of participatory street art. For another project, she pasted stickers to vacant buildings that read, “I wish this was _________,” again letting the community finish the thought.

Chang helped create a whole digital toolkit for communities that want to do this kind of vision work. It’s called Neighborland, and she reports that “it’s being used by thousands of civic organizations and residents to collaborate on real changes, including new bike lanes, night markets, community centers, regulation reforms, park programming, and large-scale redevelopment projects.”

She’s shown, however, that it doesn’t take sophisticated software — or massive concrete-smashers — to set people to imagining.

Sometimes all you need is a stack of stickers, or some spray paint and chalk.