Every eco-conscious consumer has felt the frustration of trying to make the least climate-ruining decisions. Nothing you buy is really good for the planet — every new purchase carries a carbon cost. So many factors go into determining the environmental and social impact of everything on your shopping list that even the smallest choices can become agonizing. How are you to know whether cotton really is better than polyester? Whether local or organic food is preferable? Whether GMO means anything at all? A mind-boggling array of factors can inform every decision, so for reassurance, people often turn to trusted brands and recognizable — or at least understandable —labels.

Climate Neutral Certified combines those two things in a verified seal of approval indicating that a product comes from a company taking responsibility for the carbon emissions of its entire supply chain. The idea, according to CEO Austin Whitman, is to make those headache-inducing decisions a little easier — and provide clear, simple actions for folks who want to tread more lightly on the planet.

The nonprofit wants to do for a whole array of products what Fair Trade has done for coffee and LEED has done for buildings — hold manufacturers to higher standards, and give consumers some assurance that the item they’re choosing is as climate-friendly as possible. Almost 70 percent of shoppers in the U.S. and Canada say they look for sustainability in the brands they buy. It’s a particularly high priority for Gen Z and millennial consumers. And although there’s some debate about whether these values actually translate into purchases, “eco-friendly” products are definitely a growing market, and more and more companies are catching on.

Climate Neutral cofounder Peter Dering had heard a lot of talk about reducing carbon footprints among his peers in the outdoors industry. But most of them, himself included, had no idea where to start — or even what their carbon footprints actually were. In 2017, he decided to try measuring it for his company Peak Design, which makes backpacks and other travel gear and accessories. He hired consultants to map every part of every item to every factory, determine the energy consumption of those factories, and figure out what portion of that was devoted to manufacturing stuff for Peak Design. As the process dragged on and the consulting fees racked up, Dering discovered an irony: The cost of measuring his company’s carbon footprint nearly outstripped the cost of offsetting it. “I could put all my dollars toward carbon mitigation,” he says. “Or I could put an equivalent number of dollars toward simply knowing with better confidence what my carbon footprint is.”

He wanted to do the former — and he thought he could get other business leaders on board. Dering joined forces with Jonathan Cedar of BioLite, who had had a similar experience trying to assess his company’s carbon impact. Together, they founded Climate Neutral as a way to help other businesses measure, offset, and reduce their emissions.

To earn the sunburst-y certification each year, a company must estimate its overall carbon footprint using Climate Neutral’s nifty Brand Emissions Estimator — which is less precise, but much quicker and cheaper than hiring a consulting firm. Next, the company must purchase offsets to mitigate its entire carbon output from the preceding year. Finally, it must commit to reducing its emissions and document quantitative progress in doing so.

For the uninitiated: Carbon offsets essentially mean paying someone else to clean up your CO₂ mess by planting trees, erecting wind turbines, or taking other steps to sequester or eliminate greenhouse gases to compensate for what you’ve produced. Not everyone is convinced they’re legit. Critics consider them little more than corporate greenwashing that lets wealthy polluters continue their dirty ways. Dering and Whitman concede offsets are not the answer to the climate crisis, but they are pragmatic enough to understand that there’s only so much companies can do to clean up their supply chains while waiting for the wholesale adoption of clean energy. Offsets allow them to take some responsibility for their climate impacts while continuing to do business. “Austerity will not win this battle,” Dering says.

Climate Neutral’s first crop of 150 brands, which includes the likes of Klean Kanteen, Allbirds, Numi Tea, and Kickstarter, measured and offset 228,314 metric tons of carbon for 2019. The number of brands will grow to 300 this summer, and Whitman aims to get another 250 on board by the end of the year. 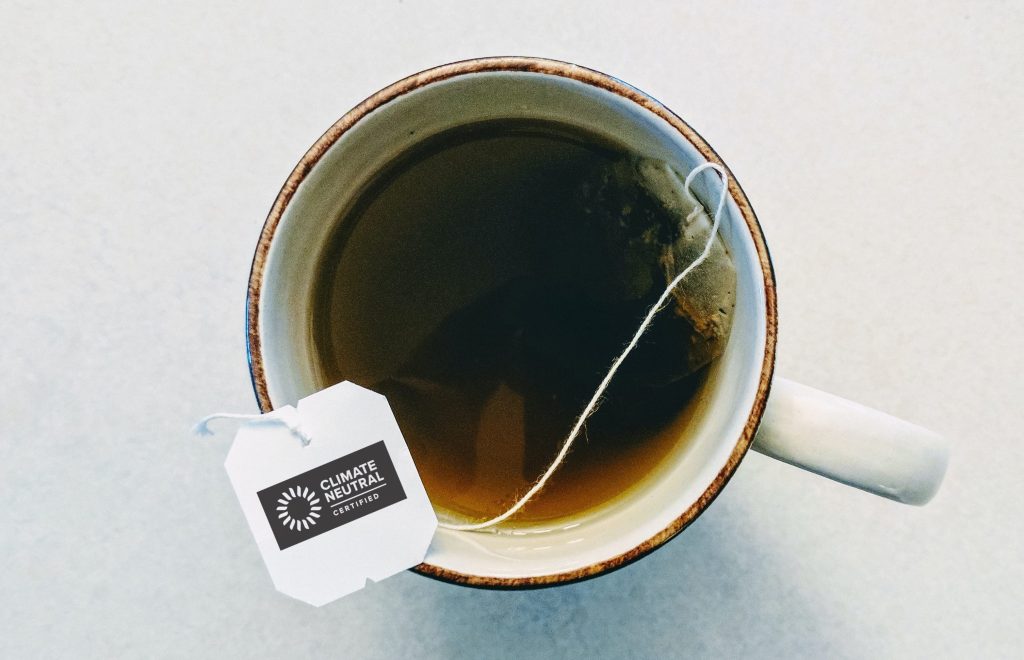 Given its relatively small advertising budget, the nonprofit largely relies on certified companies to build recognition. “We focus on enabling brands to tell our story clearly, cleanly, and accurately,” says Whitman, “so that when they carry our label out into the market, consumers are able to figure out what it means and trust it.” This is crucial, since part of the value that Climate Neutral offers to companies is the ability to convey their climate-conscious ways to customers in an enticing way. Although most of the feedback is anecdotal at this point, Whitman says he’s seen encouraging comments from shoppers who’ve taken to social media to report choosing Climate Neutral Certified products over others.

Of course, Climate Neutral is far from the only sustainability label out there. The field’s gotten so crowded that you need a database (literally) to keep track of them all. “It can get overwhelming,” says Katherine White, professor of marketing and behavioral science at the University of British Columbia. To stand out, a label must offer something unique and be easy to interpret. Even then, it’s debatable how much sustainability claims influence consumer behavior, even when people say they value it. All else being equal, White says, customers will choose the more sustainable option. But climate-friendly products have a reputation for being expensive. Understandably, it’s tough to get the average shopper to compromise on price — especially when competitors aren’t exactly advertising the grim realities behind their bargain deals. “Take cage-free eggs,” White says. “The alternatives don’t say ‘caged-in-very-uncomfortable-and-unpleasant-circumstances eggs,’ right?” If they did, probably a lot more people would shell out $4.99 for cage-free eggs.

With any eco or social-good certification, the companies most likely to pursue them are the ones already making sustainability a part of their brand. Still, White says, a third-party seal of approval — like Climate Neutral, which requires clear, tangible actions — can help show that a company is serious. “They’re not just putting it in their mission statement,” White says. “They’re putting their money and effort where their mouth is, and being held accountable for what they’re doing.” That will certainly appeal, first and foremost, to the dedicated green consumer.

To reach more people and displace more carbon, Climate Neutral will continue to pursue ever-larger and more prominent brands. Whitman hopes to certify several thousand companies over the next five years, creating a framework for discipline and accountability in the private sector while building trust and understanding with consumers. With that number of companies offsetting their emissions, Whitman says, “We’ll get up into the tens of millions of metric tons of carbon, which starts to feel like meaningful impact.” And a decade from now? Like many in the do-gooder economy, Whitman is ultimately trying to work himself out of a job. “I hope that we don’t have to exist in 10 years,” he says, “because the world will be so convincingly on track to net zero that we won’t have to put this Band-Aid on.”