Long before burgers were Impossible and fish had no fins, there was the lowly carob seed.

In the 1970s, the burgeoning natural-foods movement embraced carob as a “healthy” alternative to chocolate. The chalky, cloying substance went on to rob countless children of their childhoods. It eventually fell out of favor, mostly because it was universally loathed, but there’s a lesson here for anyone trying to create delicious ersatz products: It must approach the taste and texture of the original.

Most players in today’s alt-protein sector have internalized this point. Plant-based burgers and sausages are highly evolved replacements capable of fooling even the most discerning palates, and the number of entrants in the market grows daily. But seafood has lagged behind faux beef and chicken for a few reasons. For one, it is already considered a healthy alternative to meat, especially fish like salmon and tuna that are high in omega-3 fatty acids. “DHA omega-3 is important for our brain, eye, and heart health,” says nutritionist Frances Largeman-Roth. “Most of us, especially vegans, are really challenged to get what they need.” What’s more, replicating something like a tuna steak or sushi-grade salmon is considerably harder than a ground meat analogue like a burger or sausage.

Yet the environmental stakes are just as high when it comes to seafood. While our love for red meat is devastating the planet and exacerbating climate change, overfishing and destructive techniques like trawling have destabilized ocean ecosystems. Over 90 percent of wild fisheries are considered overfished or at maximum capacity. Shrimp is by far the most popular seafood in the U.S., and mangrove forests, which absorb carbon dioxide and help protect coastlines, are being cleared to make way for massive shrimp farms.

I’ve flirted with the idea of veganism, having recently written a few articles on the subject of alt-meats and interviewed the cofounders of a seaweed protein start-up as well as a vegan astrophysicist-turned-food scientist. I’m also intrigued by some newcomers to the marketplace — plant-based crab cakes! Vegan shrimp! Fishless fillets! Even a bluefin(less) tuna! — produced by tech companies attracting VC support and consumers seeking more responsible culinary choices.

But enough about all this. Are these products any good? Would it be possible to feed my family these meat-free seafood analogues for an entire week? Could I expiate guilt while shoring up our Omega-3s? I decided to give it a shot.

My experiment with plant-based seafood began at Orchard Grocer, a vegan grocery and sandwich shop on Manhattan’s Lower East Side. The neighborhood is steeped in immigrant history and no small amount of irony: Old-school delis peddling smoked fish and kosher meats have been edged out by hip vegan restaurants. These hotspots peddle similar fare, but instead of standard dishes prepared from animal flesh, everything is made with plant proteins and mysterious ingredients like konjac and algal oil.

With this in mind, I decided to pick up a couple of alt-meat sandwiches to see if the Poppy (chickpea “tuna” salad with the works, on marble rye) or the Marlowe (a Reuben made with beet-brined Blackbird seitan and Violife provolone) could pass for the real thing. As I would discover later, these items taken out of the box or pouch might’ve given me pause, but when prepared by an expert they were surprisingly good. My carnivorous husband went so far as to call the Marlowe delicious with the texture of corned beef, and my Poppy was surprisingly tunalike, with a faint umami flavor complemented by a nice, chewy texture. I ordered a side of carrot lox as well, and after my initial reaction — it’s just carrot! It’s bullshit! — a pleasant smokiness lingered.

I was excited to kick off faux seafood week with vegan shrimp, because not only is the crustacean my 6-year-old’s all-time favorite food, my husband is allergic to it. It also is among the most ethically dubious things you can eat in terms of environmental destruction and human rights abuses.

Scampi is easy and usually a crowd-pleaser, so I set a pot of water to boil for the pasta and opened a package of vegan shrimp. These facsimiles, made with modified starch, pea protein, and glucomannan (a dietary fiber derived from the konjac root), had an oddly rough texture and resembled nothing so much as a baker’s dozen of severed fingers.

Uncooked shrimp are dull gray in color — only when heated do they perk up and turn pink, curling as they cook. These vegan shrimp came pink and stayed pink. They’re also curled straight out of the bag. Without these visual cues, I had no idea how long to cook them. I sautéed them for a few minutes, adding ample amounts of garlic and lemon. I found them edible and somewhat shrimpy in flavor, but their gummy worm-like texture, which slowly calcified through dinner, had an unsettling uniformity to it. 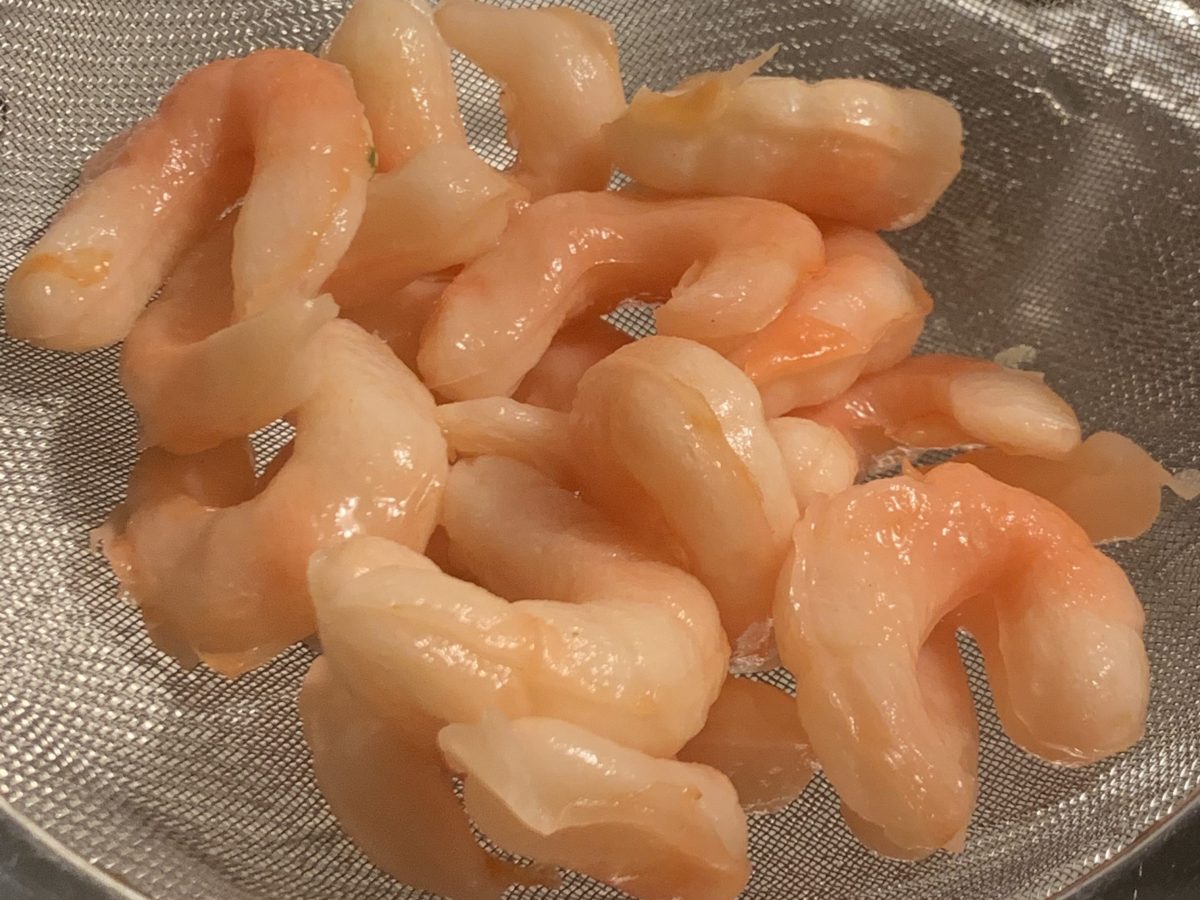 Texture is critical when creating plant-based seafoods and the hardest thing to get right, says food biotechnologist Sonia Hurtado, cofounder and chief science officer at Kuleana, which has a bluefin tuna analogue in the pipeline. “If you want to do a cooked fish like cod, you can do it with current processing technologies, but you can’t do that when you want to mimic raw flesh” for something like tuna or salmon sashimi.

Hurtado wouldn’t tell me how Kuleana approximates the texture of raw fish beyond saying “enzymes and algae” play into it, but she says it works. “When we did blind taste tests, people thought our product was real bluefin tuna,” she says. Kuleana plans on launching their product this year, starting with restaurants and then moving into retail stores.

While plant-based nigiri might turn off sushi fans, there is a growing appetite for faux fish. That might explain why Gardein’s fishless filets are seemingly ubiquitous, at least in Brooklyn — even my local deli carries them. “It’s the biggest seller in the U.S. by far,” says Jennifer Lamy, senior manager of the sustainable seafood initiative at the Good Food Institute. Granted that has more to do with the lack of competition than anything else. But that, too, is changing: Sophie’s Kitchen recently struck a deal with Walmart to carry its faux crab cakes and scallops. Even a giant brand like Nestlé is casting its line, test-marketing its fish-free Vuna in Switzerland.

The goal of the alt-meat sector is to reach a flexitarian audience — the vegan-curious, if you will — and convince people that their products excel on moral, environmental, and health grounds, and can compete, cheek by jowl, with equally delicious animal proteins. “You can’t overstate how important it is that these products taste good,” Lamy says.

Monica Talbert knows how critical that is. In 2013, she and her sister teamed up with their mother to found Van Cleve Seafood, which developed the Chesapeake blue crab pie endorsed by the likes of Oprah. But Talbert saw firsthand the human and environmental cost of the seafood industry, and in May 2020 she founded The Plant Based Seafood Co. One of its first products was a faux crab cake so authentic that people called it the best crab cake they’ve ever had, she says. Her phone started ringing with queries from around the world. “It was then that I saw the potential opportunity and the potential impact of plant-based seafood,” says Talbert.

Baked and served with french fries and a dollop of ketchup, Gardein’s filets made for a more than passable fish-and-chips dinner. It tasted much like your standard fish fillet, though the Gardein “fish” filling had a spongy rather than flaky quality. That didn’t stop us from quickly polishing it off, though.

The idea of caviar without the fish eggs becomes much more palatable when you check the price of the real stuff. A 100-gram jar of Russ & Daughters’ Osetra Gueldenstaedtii caviar will set you back about $500. The same amount will buy 72 jars of Cavi-art, available in both black (the “fancy” stuff) and orange roe, the kind you often find in sushi rolls. A purist certainly won’t be satisfied with the fake stuff, but the fact that roe-producing sturgeon are teetering on the brink of extinction might soon leave them with few other options.

I’m hardly a purist, as my experience with caviar is limited, but I found these seaweed-based analogues impressively realistic, with the tensile quality of caviar. They left a pleasing salty-umami aftertaste, though they didn’t burst open and melt in the mouth quite the same way.

I wasn’t sure how to serve them — I was running low on blini and Dom Perignon —so I included them on a bagel platter with Sophie’s Kitchen’s vegan smoked salmon and other fixings. The vegan alternative to brined salmon had a strange rubbery quality and came out of the package soaking wet — I literally had to wring it out over the sink. And the taste didn’t fool anyone. My husband took one bite and gave the rest to the cat, who didn’t seem interested in it, either. It had a decently smoky flavor though, and when I sandwiched it in a bagel with the works, I was able to more or less pretend it was the real deal. 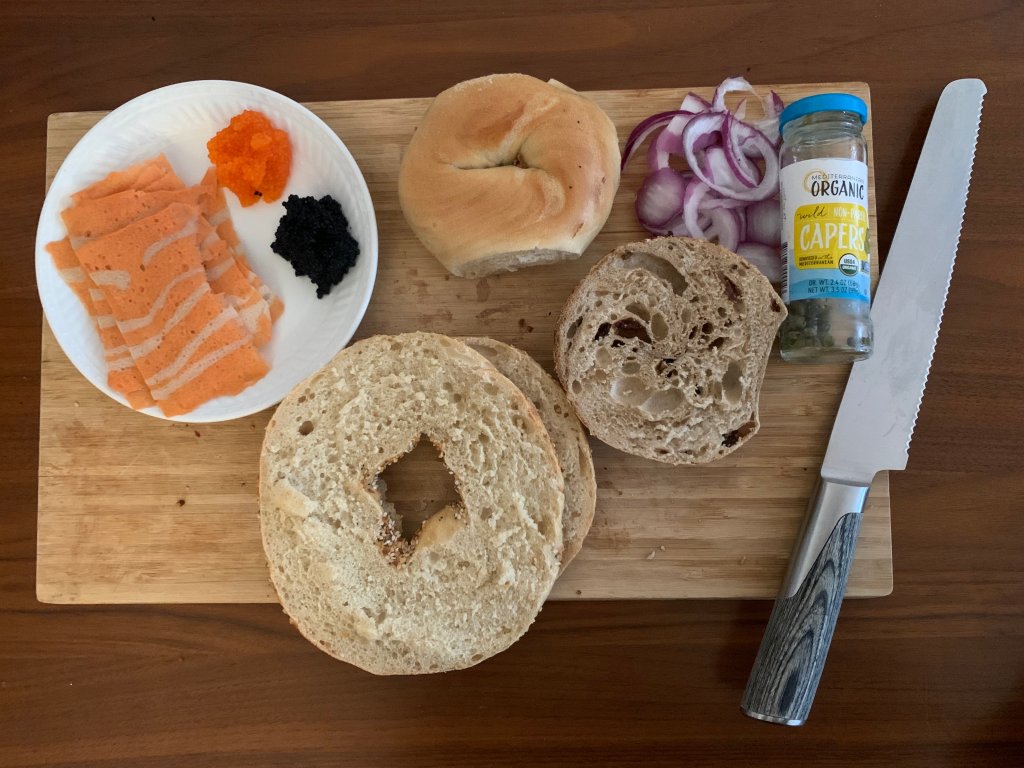 So far, I have to say, I was impressed by the vegan seafood I’d tried. That ended with faux tuna. I really wanted to like it, especially since Good Catch seems like a company in it for the right reasons. It also is aiming for something that competes nutritionally with heart-healthy fish. “They do this by adding algal oil to their protein base, which is made from various plant proteins,” Largeman-Roth says. Algal oil, which is derived from certain marine algae, is an excellent source of DHA omega-3. “It also gives the product a ‘from the sea’ flavor, which may or may not be to your liking,” she says.

I cut open a pouch of Good Catch “naked” fish-free tuna and hoo-boy, did I take an instant dislike to it! I can’t tell you if it was the algal oil, the product’s brownish hue, or its musky odor, but neither mayo nor dill nor salt and pepper, lemon, or even sriracha could disguise its flaccid, almost-tuna qualities. A blind taste test with Bumble Bee tuna fooled no one, though my husband proclaimed the fish-free tuna “good,” albeit slightly grittier than tuna — but he also eats tinned sardines (topped with yogurt!) for lunch.

This brings me to another issue facing some of these vegan seafoods: the “uncanny valley” problem. How much should they resemble the real deal? When biting into a steak, you encounter buttery flesh, but also fat, gristle, and bone. Is this what we crave? Is a desire to strip flesh from bone while spitting out gristle somehow encoded in our DNA?

For the final evening of my experiment, I pan-fried Good Catch crabless crab cakes and paired them with homemade remoulade. I served them to friends, who happen to be seafood lovers, in our corona-pod and the cakes were gone within minutes. Everyone agreed they tasted just like crab, but I have to wonder if the other flavors in the mix — the breadcrumb coating, a squeeze of lemon, a dusting of parsley — fooled our brains into thinking we were eating genuine crab, not “a six-plant protein blend.” But with our bellies full, wine glasses low, and appetites satiated, it didn’t seem to matter.

How do you create the conservationists of tomorrow? Get kids outside.