Domingo Morales will be the first to tell you that composting changed his life.

It all started in 2015 when the Brooklyn resident spotted a flier for Green City Force — an AmeriCorps sustainability training program aimed at youth within the New York City Housing Authority. Morales fit the description of an ideal applicant to a T and, feeling aimless after quitting his restaurant job months before, thought it might be a sign.

Today, Morales manages composting sites and teaches people how to incorporate composting into their lives. For some, that means bringing a crank composting system into their apartment. For others, it’s setting up a vermicomposting system (which is all about the worms, for you non-experts!) in a classroom. In a city where one-third of garbage is compostable, there’s a woeful shortage of composting services — especially for the one in 15 people who live in public housing. Morales sees grassroots composting, especially among Housing Authority residents, as a way of bridging that gap while fostering empowerment and inclusivity within the green economy. To that end, Morales mentors the next generation with the goal of increasing diversity within the composting community.

Morales found his own mentor several years ago in David Buckel, a prominent LGBT lawyer and environmental activist. Seven months after joining Green City Force, Morales landed a job at the Red Hook Farms compost site in Brooklyn, where he and Buckel worked together for three years. When Buckel self-immolated to protest fossil fuels in 2018, Morales dedicated himself to carrying on his legacy by managing the compost site with help from a volunteer.

After losing that job when the Red Hook Farms compost site lost funding early in the pandemic, Morales applied for the David Prize — a new award for NYC residents with big ideas — to develop his Compost Power education initiative. He received the $200,000 grant in October and started building and renovating 10 compost sites, often alongside Green City Force, with the capacity to handle 50 tons by the end of 2021. (He’s already halfway toward that goal.) Morales hopes to see communities take over running these sites, but if they lack the resources, he’ll train folks to do the job and help find the money to keep them going.

As if that’s not enough to keep him busy, Morales also wants to launch an educational show on composting within the next year or two. In the meantime, you’ll find him at compost sites throughout NYC and on the Compost Power Instagram, where he shares updates and composting explainers.

Fix chatted with Morales about grassroots composting, and what tips he has for compost experts looking to start local initiatives. His remarks have been edited for length and clarity.

On composting as a communal act

I plan to train and hire young adults with Green City Force, place them in green jobs, and create something like a workers’ cooperative where they can be owners in the future. By providing infrastructure and education to underserved communities, we can give them the power to take over those systems and create their own economic sustainability by generating programs that can harbor jobs and careers.

That’s basically what Compost Power is about. I chose “Compost Power” as the name because I’m using compost to bring power back to the community.

If a community wants a specific system, I’m absolutely gonna make it happen for them. It isn’t about what I want or what I think the best system for that space would be. It’s working with people to figure out what they want. As long as we’re composting, I feel like it works.

As I’m building these sites, I’m creating videos so the public can see how it’s done: What issues come with building a site? How do you compost? How do you separate organics in your household? I’m always considering these things as I build sites, asking, “What can any New Yorker benefit from?” 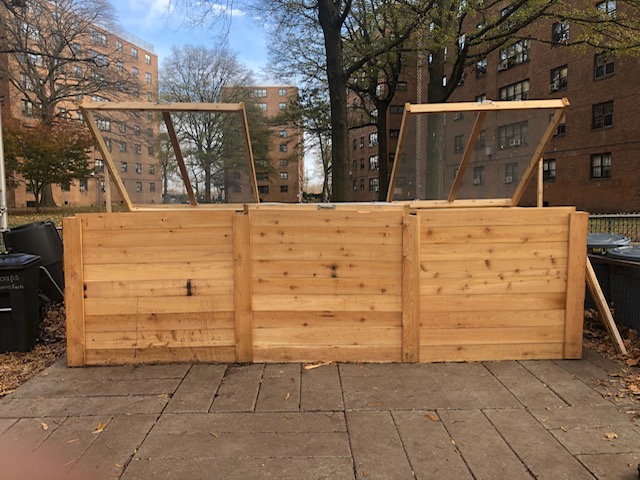 Morales works with youth from the Green City Force to construct composting systems near public housing, like this one at Brooklyn’s Bay View Houses complex. Domingo Morales

It’s important to educate the community about the benefits of composting before you start talking about launching a program. Just having a space where people can learn about different forms of sustainability is how we get engagement from the residents. That’s when they say, “Hey, can we build a farm? Can we build a compost site?”

The key to making it easy is to ask for input from residents, get them involved. Once you’re organized, you can start talking to the city council and see if your city offers participatory budgeting.

Once you have the power of the community behind you, you can build anything. As long as the people are behind me, I haven’t had an issue building a site. You just have to show them that that power is there — that they have that power.

On the importance of grassroots compositing initiatives

On convincing people that composting is cool

The first thing you have to do is remove the myths. A lot of people think that compost smells like trash, that it brings rats, that it’s disgusting. You have to prove to them that isn’t true if you do composting the right way. We haven’t had a rat problem at our Red Hook compost site, and we’ve been here since 2011. We haven’t had any odors. Walk down that block, and you wouldn’t even know it’s a compost site.

Once that compost is steaming and there are worms, you start to get interest from people. They ask, “Hey, did you light that on fire?” and “Why is that hot?” That “nature” part of composting really intrigues the community. The kids love playing with the worms. The adults are mesmerized by the steam. That’s the key — expose people to composting and give them a taste of it. That right there would just make it seem so cool.

For underserved youth to see somebody like me teaching them about composting and telling them, “Yeah, you know, I worked at the Brooklyn Botanic Garden for five years, and I started my own company” — that really piques their interest. They see there is potential to make something out of this. Telling people my story helps me sell it.

Cities are planting trees. Why not make them fruit trees?