People of color throughout the world have been practicing sustainability in myriad ways for generations. But despite this rich history, their voices haven’t always been front and center in the mainstream environmental movement. Placing them there is the mission behind Earth in Color, a creative studio founded by Grist’s first entrepreneur in residence, Darel Scott.

Aimed at centering Black voices and perspectives on the environment, Earth in Color produces a range of multimedia projects as well as IRL, nature-based experiences. Today, Scott and her team launched their flagship media project: Radicle Magazine.

The publication, which Scott calls “a medium for personal germination,” features 92 pages of original essays, artwork, recipes, and more. It can be purchased on Earth in Color’s website for $45, and Scott hopes to publish issues annually.

The idea grew from an Earth Day event in 2018, when Scott and other Stanford University students hosted the inaugural Earth in Color Art Festival at the school’s educational farm. Scott graduated that spring and began brainstorming ways to turn the fest into a full-fledged organization. In November, she joined Fix, Grist’s solutions lab, which is offering support, mentorship, and other resources as she further develops Earth in Color.

As much as Radicle is a magazine, it’s also an interactive, full-body experience. Flip through its beautiful, substantive pages and you’ll find recipe cards that you can punch out, scavenger hunts that you can embark on, and even a game of mancala using found objects. As Scott writes in her editor’s letter, “The dynamic pages of Radicle are waiting to be written on, spattered with sauce, mulled over, and revisited.”

Fix chatted with Scott about the origins of Radicle, the impact she hopes it will have, and what’s next for Earth in Color. Her responses have been edited for length and clarity.

Q. How did Radicle get its (amazing) name?

A. Radicle started with an idea of creating a really scrappy ’zine — something that we could quickly print at FedEx. The two other editors, Cam Burkins and Nia McAllister, and I would sit at the Museum of the African Diaspora in San Francisco and imagine what it could be. We knew we had to find the right name.

With my environmental science background, I had taken a little ecology and geology. I wanted the name to be at the intersection of personal and planetary. We looked up all these botany terms. I can see that doc in my head, with hundreds of potential names. It took weeks for us to land on one. 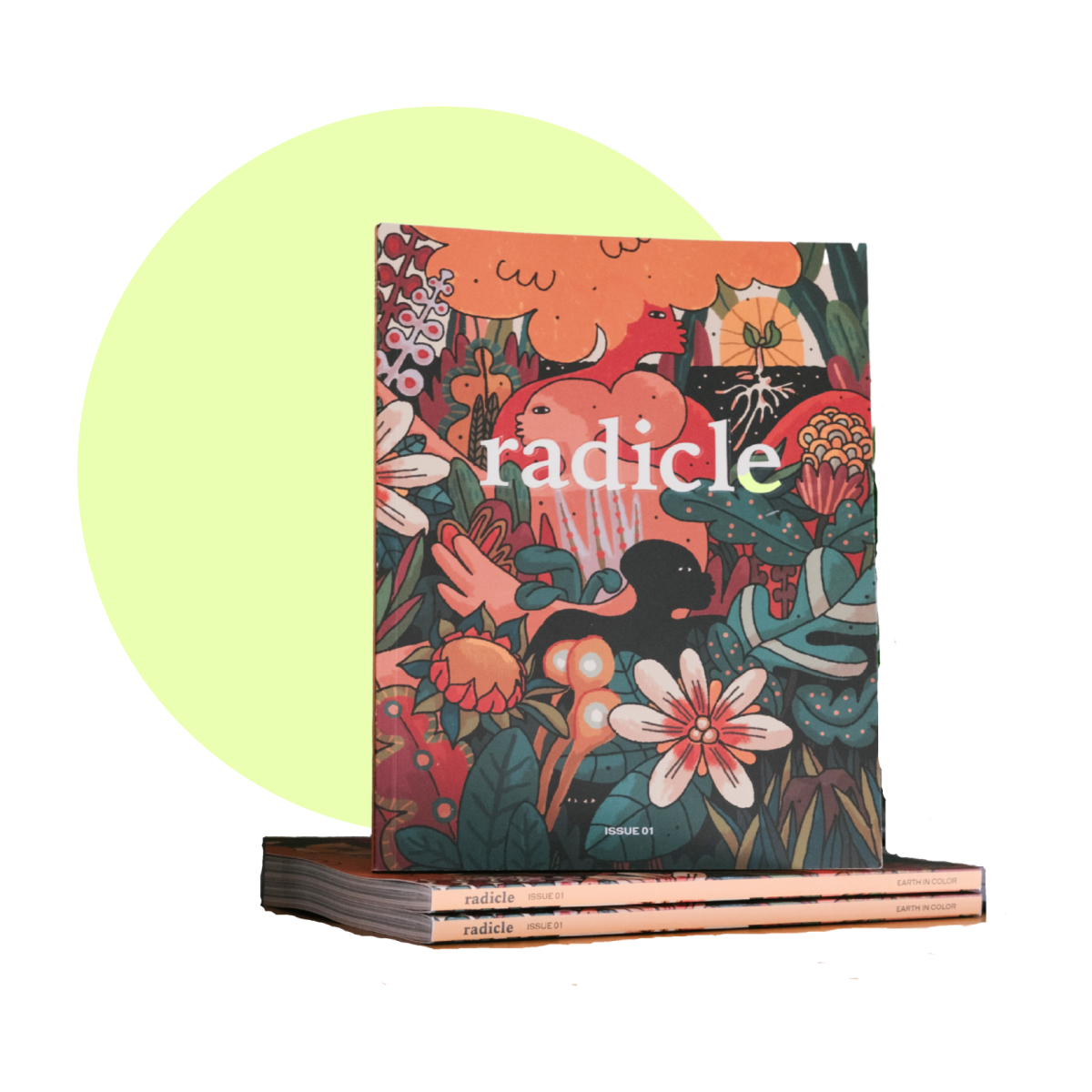 Finally, it came to me — what about “radicle”? At first, my fellow editors were thinking r-a-d-i-c-a-l. And I was like, “No, a radicle is a botany term! It’s the first shoot that appears when a seed is germinating.” The work we’re doing at Earth in Color is about getting to the root. Every reader is a radicle. And the hope is that, as they read the magazine, that first shoot will emerge for them, and they’ll take root and grow and flourish. It is also a play on “radical,” when we think about how we’re pushing the boundaries and centering voices of color in a way that hasn’t been done before. We want this to feel like a revolutionary space.

I’ve had so many conversations with people who are like, “I know Darel didn’t just misspell this word …” But then they go and look it up, and their minds are blown. That adds a layer of what I call Earth curiosity.

Q. What impact do you hope the magazine will have on readers?

A. For so long, there has been this tension between Blackness and greenness. It’s rooted in traumatic and violent histories, and the severance of cultural connections as well as connections to the natural world. First and foremost, for Black people, I want Radicle to be a reminder that we are connected to nature. This is a part of who we are. It’s part of our heritage, it’s part of Black culture.

It’s almost like we’re rewriting the narrative. When you think of Black people in nature, it calls up a lot of traumatic images — lynchings, forced labor, picking cotton. Radicle, because it’s so visually attractive and appealing, begins to reprogram. We’re going to acknowledge the history, but we’re also going to acknowledge the fact that our ancestors survived and thrived through their connection to and knowledge of the natural world. That’s the impact that I hope Radicle makes — our community sees itself in the environment in a way that’s liberated and healed.

I think Radicle can be a space of learning and education for non-Black people as well. I want the greater environmental movement to see that these connections exist, these voices are here, they have been here, and they should be listened to.

Q. Radicle is visually stunning. Can you talk about the aesthetic vision that guides your work?

A. The idea is to make healthy, liberated, reconnected futures so attractive that people want it. That’s part of our theory of change, for people to be like, “I want to be at that table at dinner in the woods (one of the first nature experiences curated by Earth in Color). I want to reconnect to the natural world.” This is what healing looks like. This is what Black joy looks like.

I’m a designer, first and foremost. If it’s not beautiful, we’re not doing it.

Q. Earth in Color started out as an Earth Day celebration, focusing on the experience and histories of people of color. What are your thoughts on Earth Day 2021?

I do think the experiences that happen on Earth Day sometimes absolve people of guilt. They give people the opportunity to say, “Alright, cool. I did what I needed to do to mitigate climate change.” But planting one tree is not going to be it, Boo.

A reimagining of Earth Day is needed, especially when we talk about centering BIPOC voices. It should be about reimagining humanity’s connection to the Earth as a kinship, instead of this extractive, transactional relationship that’s embedded in our systems.

Q. What’s next for Radicle and Earth in Color?

A. Now that Radicle is out, the plan is to have a range of virtual experiences to bring the content off the pages. Beyond just hoping that people engage with the magazine, we also want to be in community with people around the concepts that surface in Radicle. We collaborated with so many artists to produce the issue, we want to have conversations with them and with the writers, giving big ups to their work.

This is very much something that we want to build together. If people have ideas, suggestions, or things they want to contribute, hit us up!

2 Indigenous leaders on the power of owning your story