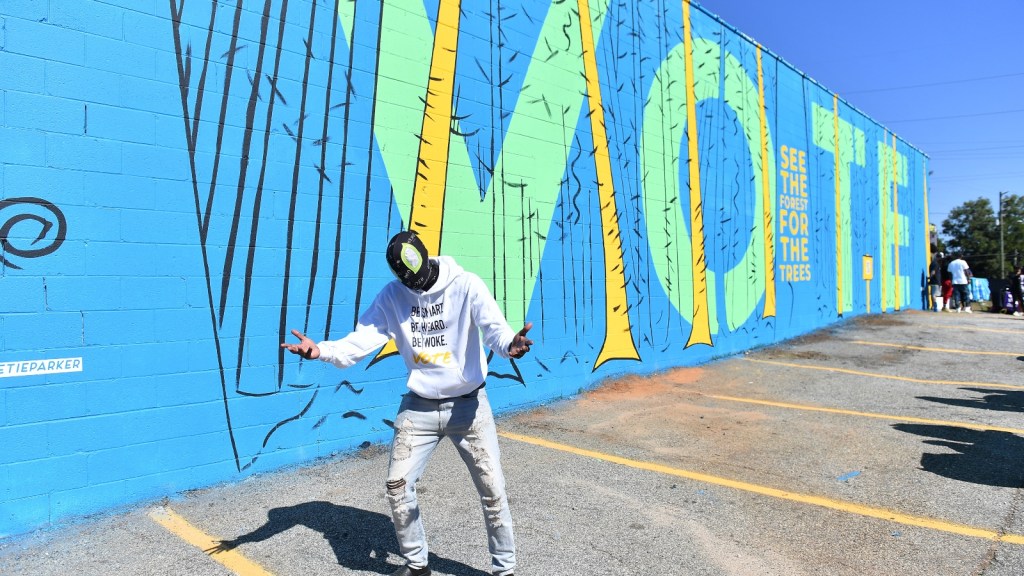 Grace Nosek is a Ph.D. candidate in law at the University of British Columbia studying the fossil fuel industry, climate change, and democracy. She is also the founder and student director of Climate Hub, a climate justice advocacy initiative at UBC.

Young people have shown again and again how far they’re willing to go for climate justice — organizing and attending some of the biggest global protests the world has ever seen, engaging in mass acts of civil disobedience, and calling out institutions, politicians, and organizations for failing on climate. But I fear they might sit out the U.S. presidential election.

As a millennial and longtime youth climate-justice organizer, I’ve been speaking to hundreds of young people, and I’ve heard over and over again how much folks feel disaffected by electoral politics and unenthused about their voting options. A recent survey found that more than 40 percent of Gen Z respondents didn’t think their vote would matter in the presidential contest. Early evidence from North Carolina shows young voters lagging far behind older voters in returning their requested mail-in ballots.

Many of my peers have told me they would rather protest and get arrested blocking pipelines than vote. I love protesting, too, but right now, voting is also an act of resistance. If people don’t vote, they’ll be playing right into the hands of the fossil fuel industry.

The fossil fuel industry would love for young people not to vote. We are far more worried about climate change than older generations, and far more likely to vote for candidates who want to take meaningful climate action. Companies like ExxonMobil and lobbying groups like the American Petroleum Institute have spent decades and hundreds of millions of dollars doing everything in their power to thwart government action on climate change.

Before we were even born, a small group of fossil fuel industry actors borrowed the most successful strategies from Big Tobacco to mislead the public on the greatest threat the world has ever known. They did so even though their scientists were at the cutting edge of climate science (the industry documents from the 1970s and 1980s are striking — take a look) and even though they themselves began to make infrastructure decisions with the impacts of climate change in mind. Their actions helped ensure that ours would be a life of more devastating wildfires and floods, of more extreme droughts and hurricanes, of more widespread social upheaval and suffering.

Yes, the political system has failed us again and again on climate. But the fossil fuel industry has been a massive, driving influence behind that failure. These corporations and their trade groups have lobbied against climate legislation, spending hundreds of millions to defeat comprehensive federal climate action in the U.S. They’ve funnelled enormous amounts of money into defeating state initiatives at the ballot box. They’ve influenced U.S. administrations to back down from international climate action.

Perhaps most insidiously of all, they’ve created school curricula that paint the fossil fuel industry in the most flattering light possible, generating critical political capital with the public.

If people don’t vote, they’ll be playing right into the hands of the fossil fuel industry.

Some in our generations prefer protesting to voting. That’s great — protesting, organizing, and movement building are critical to our collective future. But we need to vote this year to protect our right to protest. Because fossil fuel corporations and their lobbying groups have been trying very hard to undermine that right — through state and federal elected officials. Industry actors have supported the targeting of climate protesters and Water Protectors in the United States through harsh new legislation, surveillance, and a push to frame protesters as criminals and extremists.

Among myriad other tactics, industry actors successfully pushed for a model “critical infrastructure” bill that state legislatures could pass to dramatically ramp up fines and jail sentences for climate protesters. Driven in part by Indigenous-led resistance to pipeline projects, many states have now considered or passed bills with language mirroring this model bill. United Nations officials warned that bills of this type could undermine peaceful protest, and seemed to specifically target environmental and racial justice protesters.

November 3 may be Election Day, but the election is happening right this moment — mail-in and early voting are in full swing. And in an election that could be decided by only tens of thousands of votes in a few key swing states, every vote could have a massive impact on our collective climate future.

So we have to vote, and make sure our friends and family have voted — social science says each of us is incredibly powerful at getting our networks to the polls. Voting will help protect our right to protest a system that’s failing us. And it will be sweet revenge against those industry actors who decided, even before we were born, to steal our future for a little extra profit.