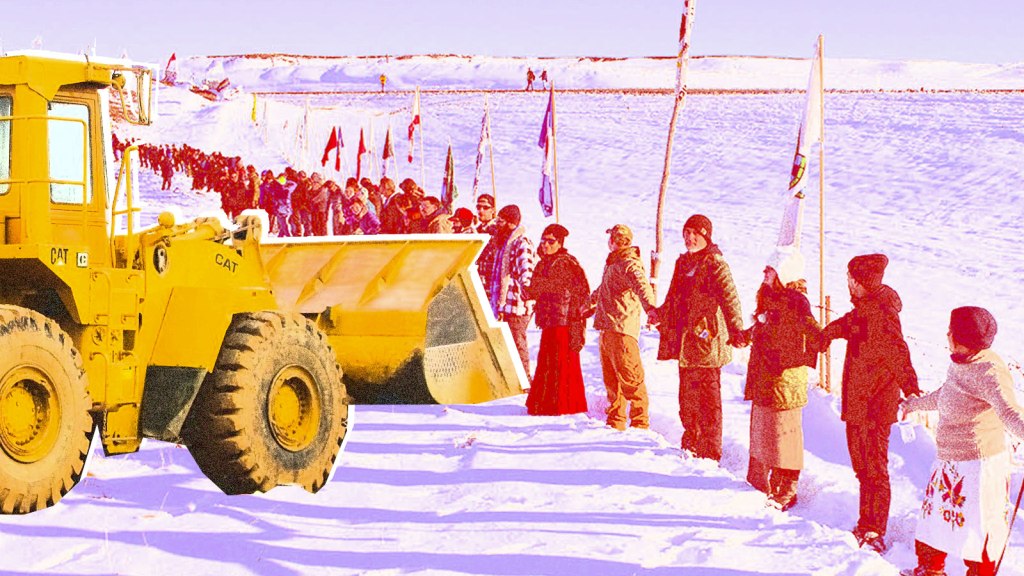 Cherri Foytlin and her fellow protestors spent much of last summer suspended 35-feet in the air in “sky pods” tied to cypress trees. They were hoping to block the Bayou Bridge Pipeline from running through their part of Louisiana.

At the time, Energy Transfer Partners was building the pipeline to move oil between Texas and St. James Parish in southern Louisiana, crisscrossing through the Atchafalaya Basin, one of the largest swamps in the country. Foytlin and others with the group L’Eau Est La Vie (“Water Is Life”) set up wooden platforms between trees along the proposed path of the pipeline. The construction crew couldn’t build the pipeline with a protestor dangling above.

Though the protesters were on private land with the landowner’s permission, some were eventually arrested by St. Martin’s Parish Sheriff’s deputies in mid August. The pipeline was completed in March, yet Foytlin could still face up to five years in prison and $1,000 in fines.

That’s because Louisiana’s Governor John Bel Edwards, a Democrat, signed HB 727 into law last spring, making trespassing on “critical infrastructure” property a much more serious crime than garden-variety trespassing. What was once a misdemeanor is now a felony. The law takes a broad view of what’s “critical”: pipelines, natural gas plants, and other facilities, as well as property on a proposed pipeline route, even if the pipeline isn’t there yet.

Foytlin is one of at least 16 people in Louisiana who’ve been arrested and charged with felonies under the new law, according to Loyola University law professor Bill Quigley, who’s representing Foytlin. All of them were jailed and had to post bonds, some as high as $20,000 to get out. The district attorney hasn’t officially charged any of them yet, Quigley said.

“These are people saying let’s make sure we have something left for future generations in the most beautiful swamp in the world,” Foytlin said. “And for that we were charged with felonies, we were beaten, we were stepped on, I was choked.” To her, the law allows the state to jail people for unpopular political views. (Messages left with the St. Martin Parish Sheriff’s Office weren’t returned.)

The effort to punish pipeline protestors has spread across states with ample oil and gas reserves in the last two years and, in some cases, has garnered bipartisan support. Besides Louisiana, four other states — Oklahoma, North Dakota, South Dakota and Iowa — have enacted similar laws after protests against the Dakota Access Pipeline generated national attention and inspired a wave of civil disobedience.

Just last week in Texas, House lawmakers passed a bill that makes interfering with some oil and gas operations a third-degree felony — on par with indecent exposure to a child.

Lawmakers in at least seven other states, including Minnesota, Kentucky, and Illinois, are considering similar legislation.

All these efforts have garnered broad support from the oil and gas industry. And many of the bills bear a startling resemblance to model legislation being pushed by the American Legislative Exchange Council, a conservative nonprofit backed by the Koch Brothers.

They have a lot in common. For starters, they heighten penalties for damaging oil and gas infrastructure and for trespassing with the intent to disrupt operations. Some mete out punishments of up to 10 years in prison and $100,000 in fines. Others would penalize organizations that “aid” protesters, making environmental groups liable for the actions of their members.

The forces behind the scenes

By the beginning of 2017, hundreds of protesters at Standing Rock had spent months clashing with law enforcement and private security guards hired by the pipeline company Energy Transfer Partners. Videos of law enforcement blasting protesters with water cannons had gone viral, and the Cheyenne River Sioux tribe filed suit to block the pipeline. Inspired by those protests, a coalition of Native American and environmental activists in Oklahoma announced they planned to stop construction of the Diamond Pipeline, which would carry oil from Cushing, Oklahoma to Tennessee.

That February, a Republican member of Oklahoma’s state House, Representative Mark McBride sponsored a bill raising penalties for trespassers on property with oil and gas infrastructure and holding any “person or entity that compensates or remunerates a person for trespassing” liable. McBride said at the time that the idea for the bill came from protests against the Dakota Access Pipeline. When asked how he would define “compensates,” he punted, saying it “would be for the courts to decide.”

Gov. Mary Fallin signed McBride’s bill into law three months later, along with another piece of legislation that created penalties for protesting near facilities considered “critical infrastructure.” Protesters in Oklahoma can now face a fine of up to $1,000 and six months in jail, and organizations that “compensate” them are liable for up to $1 million.

That caught the attention of ALEC. The influential group takes corporate money and drafts ready-made legislation for lobbyists and lawmakers. It has been behind the effort to exempt Big Oil from having to disclose chemicals in fracking fluids and pushed so-called ag-gag laws, which stymie undercover investigations of agricultural operations.

At a national conference organized by ALEC in December 2017, the group’s Energy, Environment, and Agriculture task force proposed a model bill titled the “Critical Infrastructure Protection Act.” A few months later, ALEC’s board signed off on the bill, and it soon appeared on the organization’s website. Bills with similar language then began cropping up in state legislatures.

In March 2018, then-Louisiana State Representative Major Thibaut, a Democrat, introduced HB 727, the one that landed Foytlin in jail. That same month, Wyoming and Minnesota passed similar legislation which was later vetoed by their governors.

Oil and gas lobbyists have also been backing legislation penalizing protestors. In state after state, representatives for Big Oil were an overwhelming majority of those testifying and registering as lobbyists in support of the proposals.

This January, a lobbyist working with the American Fuel and Petrochemical Manufacturers wrote to Mississippi Governor Phil Bryant’s policy advisor promoting legislation “to provide for criminal penalties for those who wilfully and illegally trespass, disrupt, destroy” oil and gas facilities. The lobbyist noted in his email that he was “expecting a bill from Chairman [Angela] Cockerham and Chairman [Sally] Doty,” two members of the state’s legislature representing each side of the aisle. Doty and Cockerham introduced bills that fit his description in the Mississippi House and Senate that week.

Environmental advocates who’ve been tracking these anti-protest bills say 2019 has ushered in a second wave of them. And ALEC appears to be cheering them on. In February, as a cold snap gripped the Midwest and Northeast, ALEC’s Grant Kidwell sent an email to members of the group’s Energy, Environment and Agriculture task force noting that Illinois, Indiana, Mississippi, and Wyoming had introduced legislation with similar language to their model bill. “The frigid temperatures brought by the polar vortex this week serve as a reminder of the important [sic] of energy infrastructure,” he wrote. “Thankfully, states have recognized the important [sic] of critical infrastructure and are moving to protect it.”

[Copies of the ALEC newsletter and emails by lobbyists were obtained by Documented, a watchdog group that tracks corporate influence on public policy, and provided to Grist.]

Texas has seen a handful of prominent pipeline fights in recent years, including ones opposing the Trans-Pecos pipeline near the Texas-Mexico border and the southern segment of the Keystone XL pipeline. Environmental groups and landowners are currently trying to stop construction of the Permian Highway pipeline, a 430-mile conduit to move natural gas from West Texas to the Gulf Coast.

The legislation could have a chilling effect on private landowners who’ve played a large role in fighting pipelines in Texas, said Judith McGeary of the Farm and Ranch Freedom Alliance, an advocacy group for independent farmers.

Valero has been building a pipeline through McGeary’s 165-acre farm in central Texas. A few weeks ago, McGeary, the daughter of a Holocaust survivor, said she found a swastika painted on the pipeline on her property. Suspecting that members of the construction crew were involved, she locked the gates to her farm and demanded that Valero send new workers. McGeary said Valero responded by threatening to sue for up to $500,000 in damages for interfering with construction. (Valero did not respond to a request for comment.)

“This was a horrible experience for us as it was,” she said. “We look at this legislation and they could’ve been threatening to have the sheriff come and pursue us for third degree felonies — for locking the gate for a weekend. It’s an incredible overreach.”

Environmental advocates see a key difference between the states that considered such bills last year and this year. In 2018, the vast majority were Republican-controlled and had significant oil and gas resources. Now the effort is spreading to states run mostly by Democrats, like Illinois, and devoid of large oil and gas deposits, like Kentucky. Illinois, for instance, is considering a bill that would make trespassing on critical infrastructure property a Class 4 felony, in line with obstruction of justice, criminal sexual abuse, and parental kidnapping.

Activists and First Amendment advocates are fighting back. In South Dakota, after Governor Kristi Noem championed bills that prohibit “riot-boosting” and enable the government to collect damages from protesters, the Oglala Sioux Tribe told her she’s “not welcome” on their reservation.

“These are our lands and our water,” the tribe’s president, Julian Bear Runner, wrote in a letter to Noem. “If you do not honor this directive … we will have no choice but to banish you.”

The ACLU has also filed suit challenging South Dakota’s new law on behalf of a handful of environmental and indigenous rights groups. Vera Eidelman, a staff attorney with the ACLU, pointed to one provision that allows the government to collect damages from protesters and use the money to cover the expenses of law enforcement.

“Meaning, essentially, if you protest the pipeline and are held liable under this law, you have to pay damages, and you are in fact funding this thing that you protested,” Eidelman said.

Quigley, the law professor representing Foytlin, said he plans on challenging Louisiana’s law as unconstitutional in federal court. “The law infringes on the First Amendment right to protest by being so vague that it can be used in an arbitrary and discriminatory manner as it was [with Foytlin],” he said.

For her part, Foytlin says such laws won’t deter her or other advocates from protesting pipelines. In fact, they might backfire.

“People will continue to go to prison.” she said. “They think that by upping the punishment they’re going to keep people from protesting, but what will happen is we’re going to do things that are more worth getting the felony. Because now if we’re going to jail, then damn it, we’re going to go all in.”