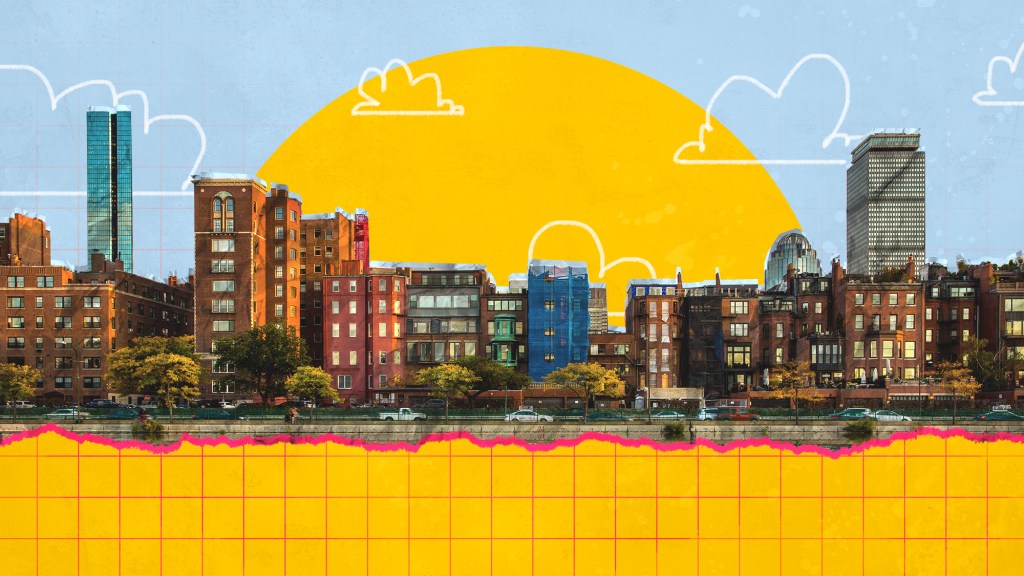 Natural gas infrastructure is akin to an enormous tree, its roots branching out across all 50 states. That analogy, passed on to her by a colleague, is always in the back of Audrey Schulman’s mind as she ponders how best to wean utilities off of fossil fuels. “If you want to bring down a big tree in a crowded area, you can’t just saw through the trunk and yell, ‘Timber!’” she says. “You bring it down in stages.”

Schulman hopes to do just that as co-executive director of HEET. The grassroots organization in Cambridge, Massachusetts, aims to accelerate the state’s transition to renewable energy with a concept that could sever our dependence on fossil fuels: geothermal micro districts.

HEET wants utilities to replace leaky infrastructure with ground-source heat pumps. The technology draws heat from a few hundred feet underground, where the earth remains a fairly constant 54 degrees or so, and uses it to heat and cool buildings. As more sections of gas-carrying pipe are replaced with this technology, it would create networks, which HEET calls GeoMicroDistricts, that serve ever-larger areas, increasing efficiency and reducing costs.

The idea has earned the unlikely endorsement of Massachusetts gas companies, as Grist writer Emily Pontecorvo has reported. Eversource, the state’s largest utility, announced in October that it’s testing the concept at two sites and hopes geothermal will keep it viable as the Bay State attempts to achieve net-zero greenhouse gas emissions by 2050. Schulman and HEET co-director Zeyneb Magavi hope the trial run helps geothermal power take off.

Transforming Massachusetts’s energy system isn’t exactly what Schulman, a novelist, had in mind when she created the Home Energy Efficiency Team — which makes the clever acronym HEET — in 2008. She and several neighbors started throwing “work parties” to help each other learn how to reduce their energy bills and their carbon footprints. Motherhood inspired Schulman to take climate action. “It was really easy for me to imagine how old my son would be in 2050, when scientists expect we’ll see the worst consequences of climate change,” she says. “Suddenly the issue became very personal.”

After learning enough about energy efficiency to write a book (literally), Schulman and her team tackled something much bigger: plugging natural gas leaks. Aging underground pipes corrode and release methane, a greenhouse gas 84 times more potent than carbon dioxide. In 2014, Schulman and her colleagues published a map of 16,000 leaks that utilities had reported to the state Department of Public Utilities (DPU). Some were fixed, but many were not. The map, and the public outrage it sparked, led to a 2016 law requiring utilities to address high-volume leaks, which are responsible for 7 percent of all releases in the state but account for half of the methane emissions.

That’s when Magavi, Schulman’s neighbor and friend, joined HEET. Magavi wanted to use her background in physics and public health to identify the largest of those invisible methane hotspots and ensure utilities plug them. In 2017, she and a few experts at HEET worked with the state’s three biggest utilities, along with activists, academics, nonprofits, and government agencies, to identify major leaks and devise a plan to limit methane emissions nationwide.

Magavi and Schulman don’t come from the worlds of energy and engineering — something they believe has served them well. “It gives us a little innovative wiggle room, because we can suggest things that tightly regulated utilities can’t,” Schulman says. “And we’re scared, so we study like crazy, and sometimes that results in us saying, ‘But didn’t you know …’ to the experts — and making them shocked and amazed that it’s true.”

‘We’re ready to get our hands dirty’

Plugging these leaks solves a critical short-term problem, but Schulman and Magavi have larger ambitions. They want to build an energy system free of natural gas, and they’ve got a plan to do it. While combing through a 2018 DPU report, Schulman calculated that the department planned to spend $9 billion replacing problem pipes and felt geothermal infrastructure would be a better investment for public health, the planet, and the state’s economy. But installing a heat-pump system in a single building can cost as much as $45,000, making the tech a tough sell.

Magavi already had been pondering how to make geothermal cheaper for her own home. “I was trying to go totally combustion-free, but when I saw the estimate, I was like, ‘You’ve got to be kidding me,’” she says. Much of that cost comes from the expense of boring into the ground. “I asked the nicest driller I could find how I could lower the cost, and he said, ‘If you can convince your neighbors to drill too, I can cut it down.’”

Magavi couldn’t convince her neighbors to go geo, but her idea of utilizing economies of scale, combined with Schulman’s sleuthing and that tree analogy, led to GeoMicroDistricts. The idea is to replace natural gas with ground-source heat-pump “loops,” or networks of pipes that bring geothermal energy to the surface. The word “geothermal” usually calls to mind the heat generated by the earth’s core, but it also refers to solar energy stored near the earth’s surface. Think of the earth as a giant battery: When sunlight hits the ground, the planet stores that energy in the first few hundred feet of its crust, maintaining a fairly constant temperature of 54 degrees regardless of the season. Circulate water through that warmed ground, and you can use it to heat or cool buildings.

The basic technology to do this has been around for more than a century, and many energy experts maintain it’s the most efficient climate-control system out there. But it hasn’t taken off because of its eyebrow-raising upfront costs. That’s what makes GeoMicroDistrics so appealing. Installing heat pumps along an entire street lowers the cost. As more streets make the switch, utilities would connect them to create districts and, eventually, a grid. Consulting firm Buro Happold Engineering, which specializes in environmental design, claimed in a feasibility study that GeoMicroDistricts could shrink energy bills while easing strain on the electricity grid, slashing greenhouse gas emissions by 60 percent, and forging the path for an efficient, systematic transition to clean energy.

The model tasks private utilities with managing the districts, allowing them to continue using their equipment and skilled workforce as fossil fuels become less viable. “We’re ready to get our hands dirty and try this,” Eversource President Bill Akley said during a legislative hearing in November 2019. “We’re aligned 100 percent with the technology and concept.”

The relationships HEET has built with gas executives over the years was instrumental in getting them on board. Magavi says other environmentalists often consider the alliance “mind-blowing,” but she thinks cooperation is key to bringing geothermal to the masses.

“Almost everyone wants health, happiness, and a livable world for their children,” she says. “Our disagreements with these executives are usually about how to get to that shared vision and what trade-offs to make. But working together is way more effective than pointing fingers.”

Of course, Schulman and Magavi anticipate challenges in maintaining their unusual coalition of climate activists, gas companies, and geothermal startups, especially as they figure out the laws and regulations required to make the idea work. “We’re going to integrate ideas about job creation, fair wages, low-income access, and reducing public health gaps,” Magavi says. “We want this model to spread across the country. So it’ll be hard to reach those equity goals and fend off a battle of interests in our coalition, all while transitioning to clean energy at the speed and scale needed for the planet.”

Schulman and Magavi say it doesn’t always help that HEET is run by two women. Magavi says that she attended a national conference hoping to get industry insiders excited about the idea. She eventually did, but only after enduring a lot of disinterest and condescension.

“It’s a really heavy lift to get an older white guy to believe that an innovation came from us,” Magavi says. “But I was the only woman in my physics classes. And then I worked doing underwater acoustics for the U.S. Navy with mostly men. I’ve learned to enjoy the banter, and I don’t back down from a fight.

“Sure, I bring cookies to our meetings,” she adds. “But guess what? I also wear the hardhat.”