Warren Palmer III earned a degree in horticulture and a landscaping license while incarcerated, which explains his uncanny ability to rattle off plants and their medicinal properties. He especially likes aloe vera, which he mentions often. It reminds him of his grandfather and life in the country: birds chirping, chickens scratching in the yard, family, and innocence. “I know you’re not supposed to have favorites,” he says, as if speaking of a child, “but that’s my favorite.”

Palmer became a student of horticulture while serving 28 years at Louisiana State Penitentiary, a maximum-security farm prison better known as Angola for the plantation it was built on. He spent a decade alone in a 6-by-9-foot cell, relegated to solitary confinement after trying to escape. That’s where he met Herman Wallace, a former Black Panther whose 41 years in solitary as one of the “Angola 3” ranks among the longest such sentences in U.S. history.

Wallace and several others at Angola were voracious readers, with books stacked floor to ceiling. They started lending them to Palmer, who saw his world change. Instead of whiling away long hours walking the streets of New Orleans in his mind, he hiked the Tigris River, explored Australia, and sailed the seven seas. On noticing his keen interest in gardening, one of them handed Palmer Carrots Love Tomatoes, a how-to manual now filled with dog-ears and scrawled notes. Then they introduced him to Jackie Sumell.

Sumell is the artist and prison abolitionist behind Solitary Gardens. The project invites those in solitary confinement (known as “solitary gardeners”) nationwide to design flower beds or vegetable patches that volunteers on the outside plant and tend. Each precisely matches the dimensions of the cell where Wallace and Palmer spent 23 hours each day. Since launching the project with a few plots in the Lower Ninth Ward neighborhood of New Orleans in 2015, Sumell has seen it take root in New York, Philadelphia, and Houston. Beyond providing a measure of beauty along with fresh flowers, vegetables, and herbs, the green spaces humanize and foster empathy for those living in nearly complete isolation. “We are really committed and dedicated to creating relationships where we don’t need innocence to love,” Sumell says. 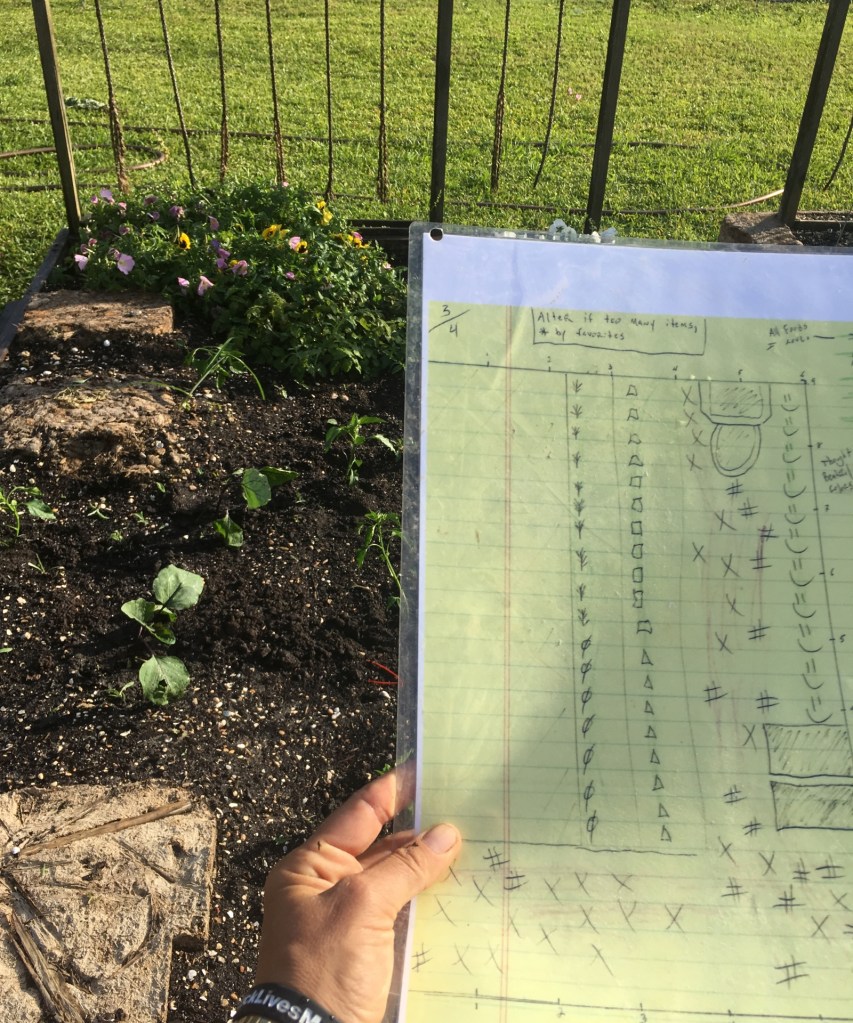 A volunteer works off of a design submitted by Jesse Wilson, who’s been in solitary confinement since 2004. Courtesy of Jackie Sumell

The idea came to Sumell following Wallace’s death from cancer just three days after his release in 2013. The pair had spent 12 years creating “The House That Herman Built,” a multimedia exhibition documented in the film Herman’s House, which answered the question, “What kind of house would a man who’s spent decades in isolation build?” Grief-stricken, Sumell reread years of their correspondence, prompting memories of Wallace’s fondness for gardens and the elaborate paper flowers he would craft for supporters. She launched Solitary Gardens as a tribute to his legacy, a call to end solitary confinement, and an invitation to “imagine a landscape without prisons.”

Each plot is fronted by an aluminum gate that resembles the bars of a cell and enclosed by low walls made from what Sumell calls “revolutionary mortar”: ground sugarcane, cotton, tobacco, and indigo. Using the largest plantation-era crops underscores “the evolution of slavery into mass incarceration to identify the fact that we as a society have not eradicated chattel slavery, but renamed it,” she says. Over time, the mortar and the plants decompose, theoretically offsetting some of the carbon footprint generated by the prison-industrial complex.

Some solitary gardeners design vegetable or herb gardens to help feed and heal those who tend the gardens and the communities they reach. Ana Croegaert, a cultural anthropologist who volunteered with Solitary Gardens in New Orleans, worked with Jesse Wilson on his plot until she moved to Chicago this year. Wilson has been in solitary confinement at a maximum-security federal prison in Colorado since 2004 and saw the project as an opportunity to connect with society. “He wants people to heal,” she says. “He wants people to be fed by something that he’s been involved in.”

The gardens also provide those on the inside with an opportunity to revisit all they’ve left behind. Many select plants that speak to specific memories or are of some significance to loved ones. Wilson, who was first incarcerated in a Mississippi state prison at age 16, favors pansies, for his mother, and honeysuckle, for his grandmother. “He works a lot off of his memories of things from his youth — his childhood, essentially,” Croegaert says.

In that way, the gardens allow folks confined to lives in isolation to reflect — and to grieve, often for the first time. “People who are incarcerated are often not given space to process the things that they’ve lost,” says Becca Amos, who visited New Orleans during the summer to manage the 10 gardens there. But it also allows them to look forward and establish new experiences, something Amos witnessed while working on the therapeutic horticulture program at Rikers Correctional Facility in New York. Gardening “helps the folks who are incarcerated create new memories in a place where you’re not really supposed to do that,” she says.

The solitary gardeners aren’t the only ones moved by the experience. Those who visit their plots are confronted by the idea that a person might be forced to spend years, or even decades, locked away in a space smaller than an SUV. “I think in that way, the gardens are so beautifully good at pulling people together and making people bear witness to the problems,” Amos says. 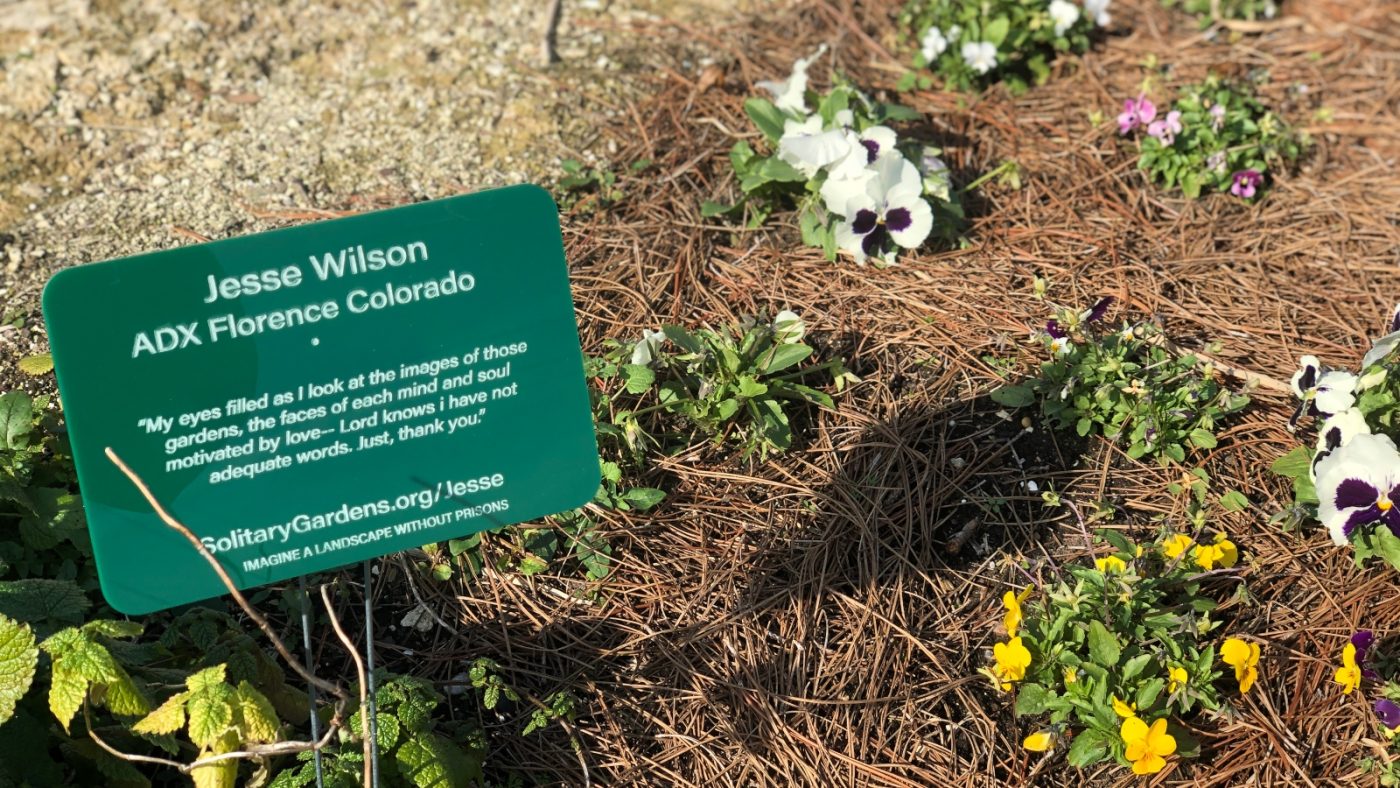 The experience of designing gardens allowed Palmer to maintain relationships with his mother and other family members, something he called “a real blessing.” He created a variety of plots, including one filled with medicinal herbs to help his mother, whom he credits with giving him a green thumb and a passion for flowers, in her battle against cancer. Sumell and other volunteers made sure she received them, and when she died in August 2019 Sumell planted a hawthorn tree, said to help heal a broken heart, in her name.

Solitary gardeners aren’t the only ones finding peace, if not a form of closure, through the plots. Working on the project has provided a measure of comfort for Sumell, who lost her 9-year-old godson to gun violence in July and found solace in those who came to her side. “The way that people loved me in the most horrible experience of my life tells me that I’m doing the right thing, that I’m making the right choices,” she says.

The Solitary Gardens project continues growing and has started raising flowers for incarcerated mothers. Sumell has also shifted her focus to medicinal plants, which are turned into salves, teas, tinctures, and other remedies that are given away at public workshops by the mobile Prisoner’s Apothecary, or “Plantbulance.” Another truck, called the Garrison, brings pop-up forums about prison abolition to communities. When the COVID-19 pandemic ends, Sumell hopes to work with the Samara School of Community Herbalism on two more projects in New Orleans. “Apothecarts” pulled behind bicycles will work alongside an “Apothecafe” to teach people about plant medicine and prison abolition.

Palmer has his own plans for the future. He walked out of Angola the day before Thanksgiving, paroled after serving 28 years of a life sentence. Though he’ll continue working on the Solitary Gardens plot, he’s also eyeing a move into holistic medicine. Now living in a part of Louisiana known as cancer alley, which is home to hundreds of petrochemical plants, Palmer hopes to one day create backyard holistic health gardens that might help those sickened by all the pollution. He’s already got his eye on a plot in his sister’s backyard.