Four years ago, Sharon Lavigne was diagnosed with autoimmune hepatitis. Blood tests revealed that she had aluminum inside her body. Lavigne has lived all her life in St. James Parish, which sits on an 85-mile stretch of the Mississippi River that connects New Orleans and Baton Rouge, Louisiana. Since the 1980s, it’s been known as “cancer alley.”

According to Environmental Protection Agency (EPA) data, seven out of 10 U.S. census tracts with the nation’s highest cancer risks are located in this corridor, which is already home to more than 150 chemical plants and refineries. When she got her diagnosis, Lavigne didn’t think any of this might be related to her failing health, or that of so many of her friends and neighbors.

“That should’ve been my wake-up call,” Lavigne, 67, told Grist. “But I was teaching in school, uninterested with what’s going on. I was only interested in my job, going home, resting, and taking care of my children and grandchildren. That all changed when I found out that a new plant was coming.”

When she heard that another petrochemical company was planning to set up shop nearby, Lavigne left her job as a special education teacher in 2018 and founded RISE St. James, a grassroots environmental justice group, to try to stop any new development that could further endanger the health of her community. Though the novel coronavirus has hit her parish especially hard — its COVID-19 death rate is the fourth highest in Louisiana and five times higher than the overall U.S. death rate — Lavigne and her allies have not given up the fight.

But the company has a head start. In 2014, the St. James Parish Council had quietly changed the land use plan for Lavigne’s district from “residential” to “residential/future industrial,” welcoming new industry with little public input. Then, this January, the Louisiana Department of Environmental Quality (LDEQ) approved permits for the Taiwanese plastics manufacturer Formosa to build a $9.4 billion petrochemical complex in St. James Parish, despite data showing that it could more than double the amount of toxic pollutants in the area. Formosa’s own models show that it could emit more of the carcinogenic compound ethylene oxide than just about any other facility in the country. These levels would exceed the benchmark that the EPA uses to determine if exposure poses cancer risks. (That benchmark is not legally binding, and a Formosa spokesperson wrote in a statement to Grist that the company does not expect its emissions to reach the level specified on its permit applications.) The gargantuan facility will consist of 14 separate plastics plants, two of which are ethylene glycol plants.

On March 31, the EPA’s Office of Inspector General, an independent agency watchdog, put out a report stating that the EPA and LDEQ failed to provide critical information to nearby residents about ethylene oxide emissions and the elevated cancer risks associated with the toxic chemical. In response, however, EPA Administrator Andrew Wheeler demanded that the OIG withdraw the report. 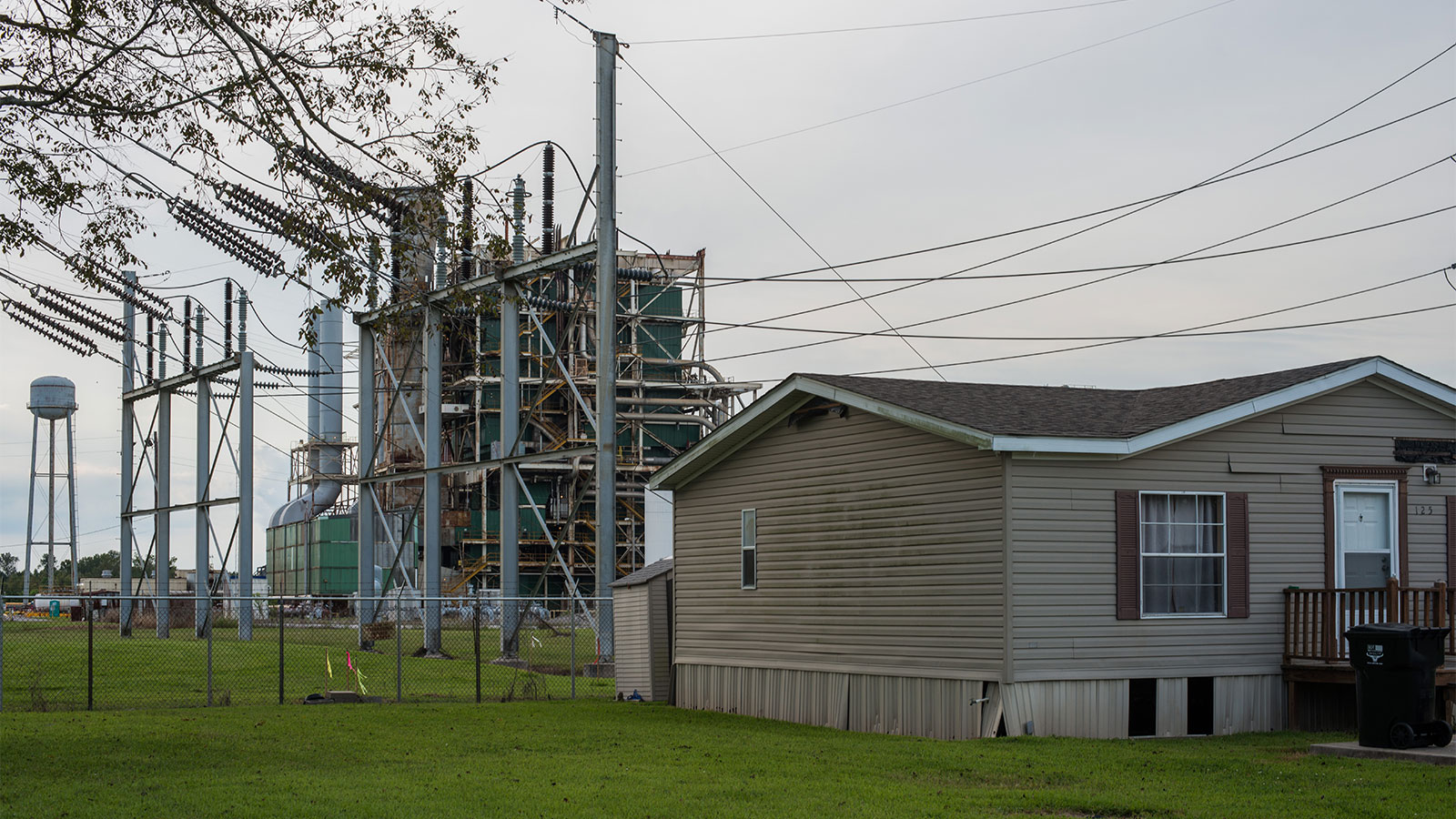 Adding insult to injury for the predominantly black residents who live near the proposed facility in Lavigne’s district, Formosa’s chosen location sits on two former 19th century sugarcane plantations and a slave burial ground. Although Formosa did not initially disclose this information, a public records request by RISE showed that the company knew that formerly enslaved people were buried beneath the land during its obligatory land survey in 2018. Legal complaints filed against the proposed development cite not only the environmental impacts of building the facility but also the historic and cultural harm of erasing this history.

Formosa has publicly maintained that it followed thorough and conscientious procedures to identify and mitigate both the environmental and cultural impacts of its proposed development. The spokesperson wrote to Grist that Formosa “has met with hundreds of people in the parish” and regularly updates community leaders and stakeholders. The company has also paused construction during the COVID-19 pandemic, citing “an abundance of caution” and concern for its workers.

“Emission modeling was conducted and demonstrated that [Formosa’s] emissions will have predicted ambient concentrations that will be below the state and federal standards established to protect human health and the environment with an added margin of safety,” Janile Parks, the Formosa facility’s director of community and government relations, wrote in an email to Grist. “To address community concerns and as part of [Formosa’s] land use ordinance with St. James Parish, [Formosa] will voluntarily place air quality monitoring along its eastern property boundary to provide data on air emissions.”

African Americans in “cancer alley” are facing not only the country’s most severe health outcomes in terms of pollution-linked cancer, but also some of its most severe COVID-19 outcomes. As of late April, about 56 percent of those dying from the novel coronavirus in Louisiana were African American, though they comprise only 33 percent of the state’s population. And as of April 26, eight out of the 10 parishes in Louisiana with the highest COVID-19 death rates are in the southeast industrial corridor that includes “cancer alley.”

The Formosa spokesperson wrote to Grist that “officials have not suggested there to be any link between industrial emissions and COVID-19.” The company instead pointed to Louisiana’s elevated rates of diabetes, obesity, and hypertension, which “are especially high among minority communities.”

But research has suggested a link between air pollution and COVID-19 outcomes, independent of other factors. When researchers at Harvard’s school of public health released a study last month showing a relationship between particulate matter (PM 2.5) pollution levels and increased death rates from COVID-19, experts and advocates in Louisiana began to think about what the study means for their state. Kimberly Terrell, director of community outreach at the Tulane University Environmental Law Clinic, identified Louisiana’s PM 2.5 hotspots and looked at the COVID-19 outbreaks in those locations.

“There’s a cluster of COVID-19 deaths along the industrial corridor,” Terrell said at an online press briefing. “The strength of that Harvard study is that it looked at the entire nation, and it looked at a really huge population of people and found this relationship between pollution and death rate — and that relationship can be hard to see, because it’s often obscured by other things like access to healthcare, poverty, unemployment, risk of getting the virus.” 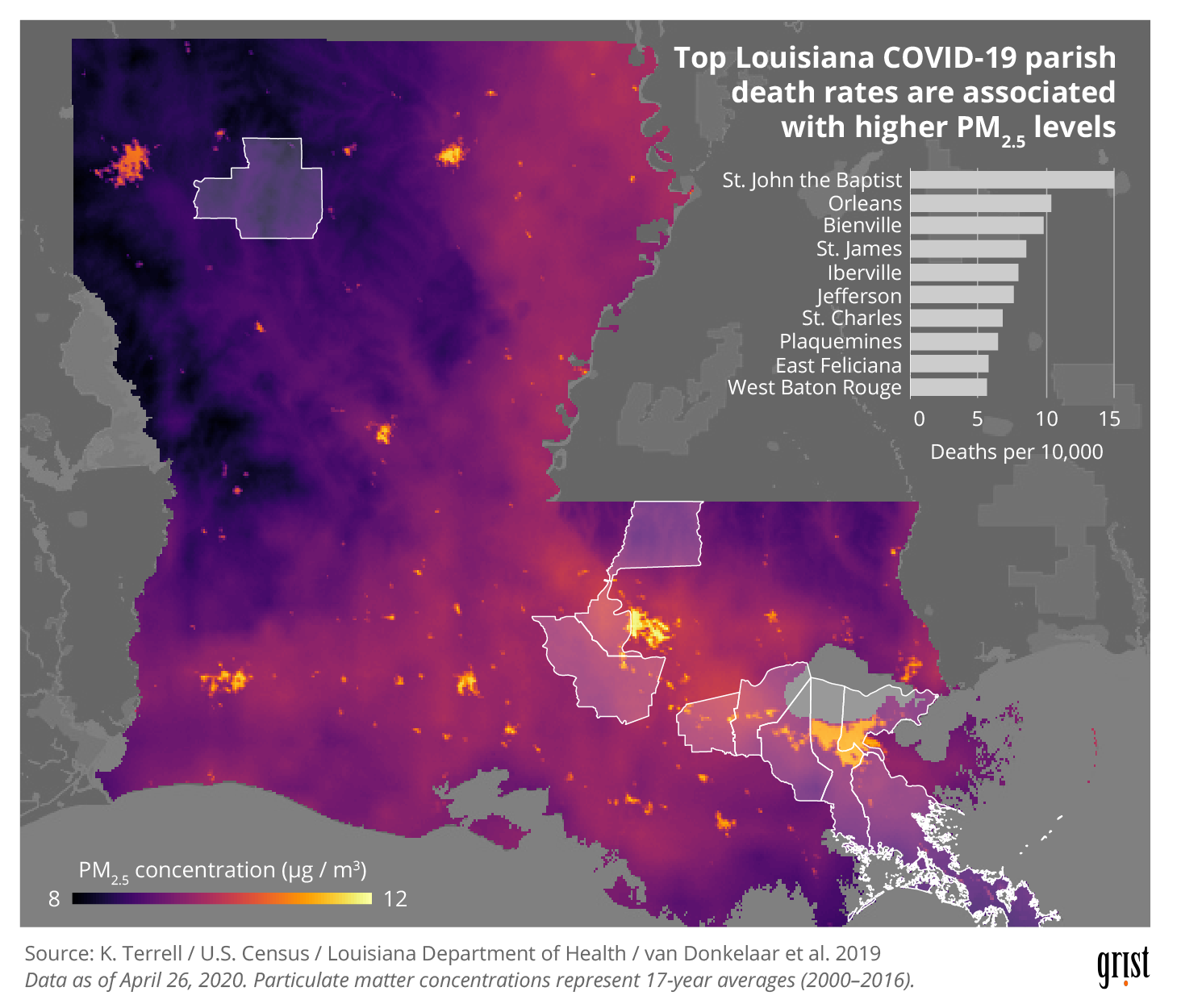 So Terrell set out to look more closely at that relationship. She scraped the raw data from the Harvard study and performed her own analysis. The majority of PM 2.5 hotspots are concentrated along “cancer alley” — and so are the highest death rates from COVID-19. Terrell also measured other COVID-19 risk factors and preexisting health conditions by plotting out the geographic distribution of diabetes and obesity across the state. She found that “cancer alley” residents do not suffer from conditions like diabetes or obesity at higher rates than folks in other parts of the state. This suggests that high levels of PM 2.5 concentrated in Louisiana’s southeast industrial corridor could have had a decisive effect on the severity of its COVID-19 outcomes.

And based on recent trends, the pollution behind all this is set to continue or even worsen. In Louisiana, air quality measurably improved from 2000 to 2015. However, since 2016 the state has reversed that trend. PM 2.5 pollution is increasing again, specifically in the southeast part of the state.

Myrtle Felton, a member of RISE St. James, has seen her loved ones pass away one by one from cancer and other respiratory illnesses. Back when no industrial facilities loomed over her backyard, she used to enjoy tending to her garden for most of the day. But in the 45 years that Felton has lived in St. James Parish, petrochemical plants have been appearing left and right. Since then, Felton said that she doesn’t like to be outside anymore because of the dirty air.

“So many people here have died of cancer. 2014 was a real awakening for me, because I lost five people that were very close to me,” Felton told Grist. “My sister-in-law died first of cancer in February, then my brother-in-law the next month, then my husband, he died of respiratory problems. If that’s not a red light going on telling me something is wrong, then what is?”

Outside her window, she can already see two chemical facilities on the horizon, and if it wasn’t for the pandemic, she said dark smog would usually obscure her view of the facilities. She worries about what will happen when Formosa’s operations begin.

“Somebody needs to come in and do something,” Felton told Grist as she broke into tears. “Don’t just listen to what I’m saying, feel my heart.”

For now, Formosa is weathering the coronavirus outbreak, but with their permits approved by the state, the next step is to gear up for construction. Residents of St. James Parish vow to continue their fight by telling their stories.

Forget the TP: Here’s what you really need to get through a disaster