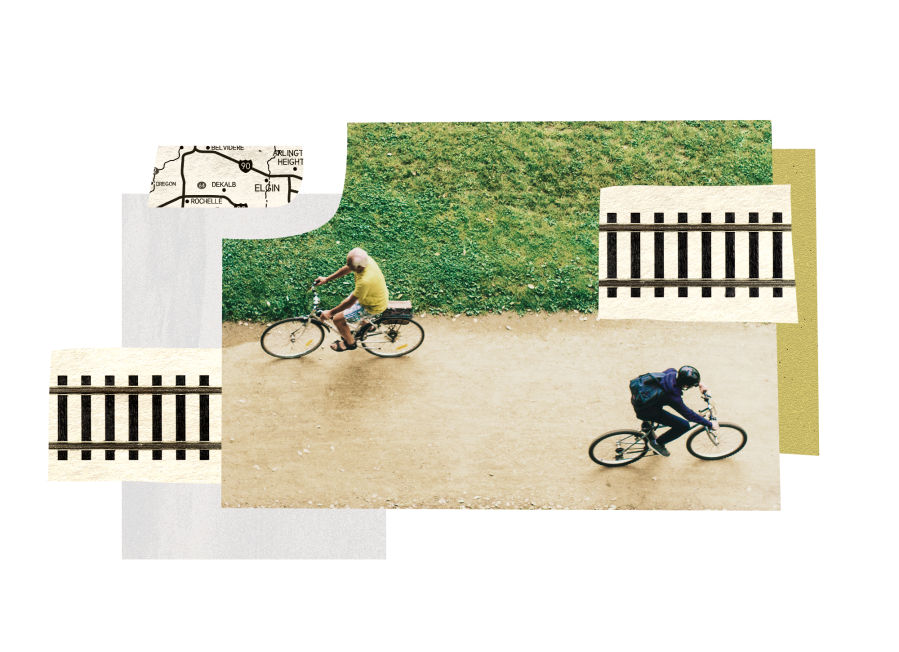 “We are human beings. We are able to walk upright on two feet. We need a footpath.”

“Player with railroads and the nation’s freight handler; / Stormy, husky, brawling, / City of the Big Shoulders.” The opening stanza of Carl Sandburg’s 1914 poem “Chicago” paints a vivid picture of an industrial stronghold, one fueled by development and centered around a thriving railroad hub. Chicago is still sometimes referred to as the railroad capital of America.

But some 50 years after Sandburg celebrated the Second City, as many of those tracks were abandoned due to the expansion of highways, trucking, and air travel, a different picture of the city was painted. In a 1963 letter to the Chicago Tribune, a woman named May Theilgaard Watts described a vision for Chicago’s rail lines based not on construction and industry, but nature.

In doing so, she is credited with starting what has become a national movement to convert abandoned railways into footpaths and hiking trails, an ongoing campaign known as the rails-to-trails movement.

Watts was a community leader and naturalist at the Morton Arboretum in Lisle, Illinois, when she came up with the idea. An educator from an early age, she began teaching at public schools in Chicago when she was 18. During her summers off, she earned a degree in biology and ecology at the University of Chicago and studied illustrating and sketching at the School of the Art Institute of Chicago. After graduating, she and her husband moved to the northern suburbs of Chicago, where she became involved with Friends of Our Native Landscape, an organization working to preserve natural areas. She advocated to garden clubs about the importance of including and preserving native plant species in landscaping projects. In 1939, Watts started working at the arboretum, where she organized the education programs and created resources that helped people understand and interpret nature. Her 1957 book Reading the Landscape remains a widely popular education tool.

In her campaign to convert Chicago’s rail lines to nature havens, Watts took inspiration from the Long and Appalachian Trail, which had been championed and built by everyday citizens some three decades prior. She saw that with the proper mobilization of people and resources, a new trail was feasible. She was eyeing the Chicago Aurora and Elgin railroad line — once known as the “Roarin’ Elgin” — a busy connection that lost its steam due to highway developments to the suburbs and was eventually partially replaced by an expressway. Watts envisioned the unused part of the railroad becoming not just a footpath, but a thriving ecosystem connecting communities. She described the sections of the path being stewarded by various groups, with Boy Scouts, students, and civic orgs pooling resources to make the communal area thrive. She painted a picture of designated bike lanes that would provide safe and fast movement.

“Imagine yourself going for a walk on an autumn day,” Watts wrote in her letter to the editor. “Choose some part of the famed Illinois footpath. Where the highway crosses it, you enter over a stile. The path lies ahead, curving around a hawthorn tree, then proceeding under the shade of a forest of sugar maple trees, dipping into a hollow with ferns, then skirting a thicket of wild plum, to straighten out for a long stretch of prairie, tall grass prairie, with big bluestem and blazing star and silphium and goldenrod.” 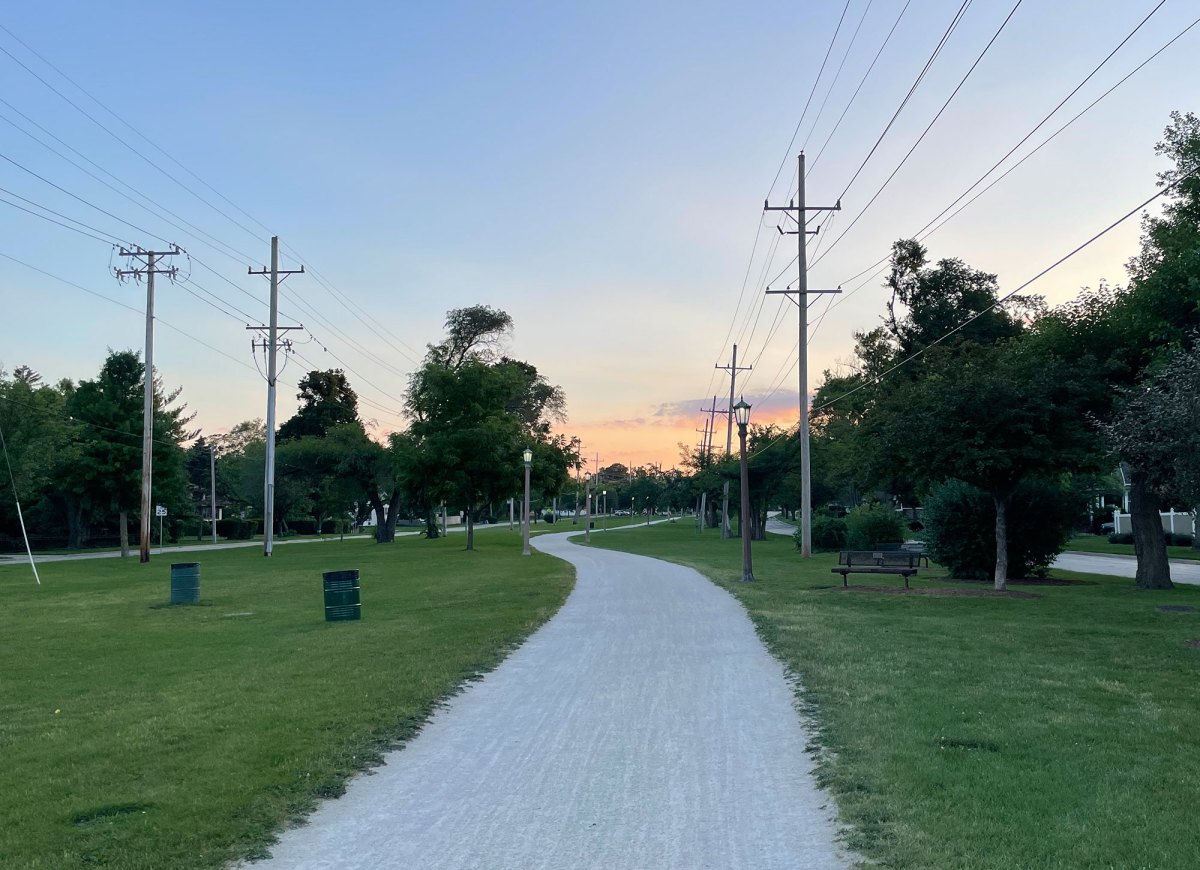 A view of the Illinois Prairie Path, lined by trees and telephone poles. Paul Gordon

Watts also helped community members to see the urgency behind her vision. “That is all in the future, the possible future,” she wrote. “Right now the right-of-way lies waiting, and many hands are itching for it. Many bulldozers are drooling.”

After her letter was published in the Chicago Tribune, 13 other advocates joined her in founding the Illinois Prairie Path corporation to make the vision a reality. The group recruited volunteers, conducted a grassroots campaign to rally public support, and met with government officials from local to national levels.

The Illinois Prairie Path became a 61-mile multi-use trail now enjoyed by some 800,000 people each year. And it was the first in a network that now comprises 24,000 miles of converted rail tracks across the U.S.

Organizations like the Rails-to-Trails Conservancy have advanced this growing movement, lobbying for more conversions and working toward what is known as the Great American Rail-Trail, a cross-country path connecting more than 145 abandoned rail lines. The Conservancy champions a cross section of transformative benefits from these conversions, naming economic stimulus to neighborhoods no longer served by railroads and improved community health promoted by accessible recreation and expanded green spaces. 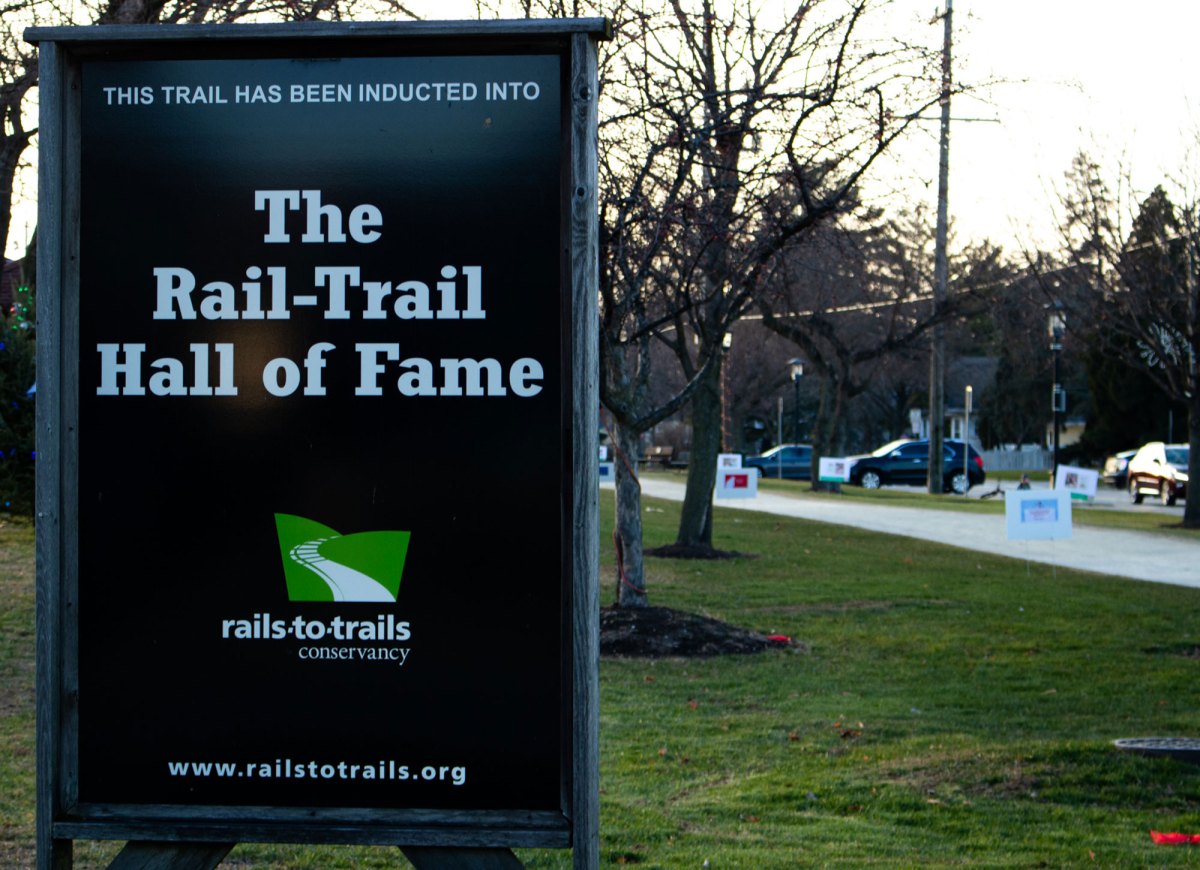 The Illinois Prairie Path has been inducted into Rails-to-Trails Conservancy hall of fame. Paul Gordon

As for the Illinois Prairie Path? Advocates are working to extend the trail beyond its historical endpoint — which dumps bikers and pedestrians at a busy intersection — to connect it to a popular public transit stop, hoping to more fully realize Watts’s vision of making it both a nature sanctuary and an alternative to commuting by car. Ralph DiFebo, an advocate who founded the Prairie Path Extension Group, hopes a connection to mass transit will help “get people out of cars and onto bikes.”

Bill Karges has worked at the iconic 104-year-old Pioneer Garden and Feed store, located just off of the Illinois Prairie Path, for nearly 50 years and has seen how the trail has shaped the area. He says the benefits extend beyond reducing traffic. “It’s a great conduit to get over to other communities. This may sound schmaltzy, but it unites the communities and exposes people to the other towns.”

Fix is preparing for our next issue — and we’d love to hear from you.

Climate change is a global crisis being fought at a community level. Our upcoming series will highlight five cities or towns taking unusual, unprecedented, or exciting steps to mitigate climate change and advance climate justice. Could one of them be yours??

Reply to this email (or hit us up here) to tell us how your community is leading on climate. We’re looking for far-flung stories about city-wide efforts or initiatives that reveal how people and policymakers can come together to foster lasting change. The stories will be published right here in Looking Forward, and on our website.

The Great Allegheny Passage is a 150-mile converted rail trail that runs from Pittsburgh to Cumberland, Maryland. The fourth-longest railway trail in the country, the GAP is also a host trail for the Great American Rail-Trail, which will one day form a seamless connection between Washington, D.C. and Washington state. 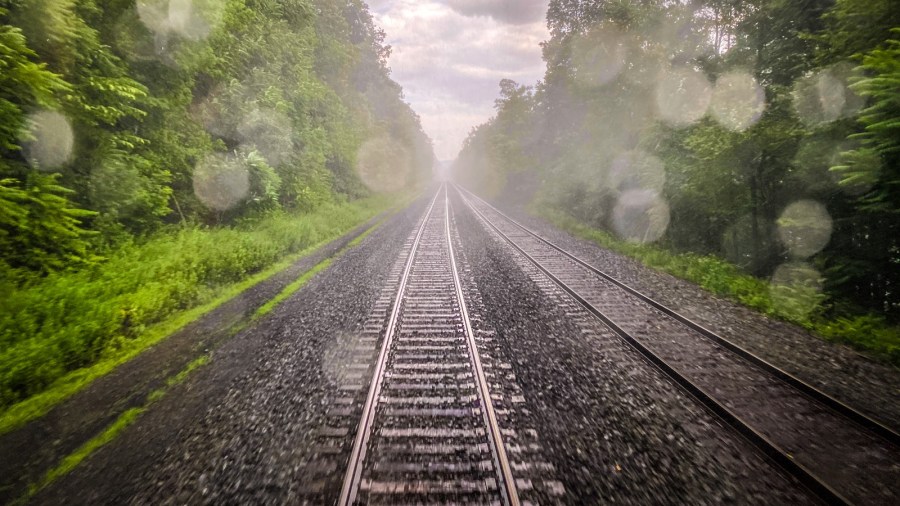 The invisible labor of the climate movement