Growing up, Beronda Montgomery shared a home with countless plants. Her mom loved gardening and would thrill at the emergence of a new leaf or the first hint of flowering. But Montgomery found her viney, green housemates boring. They couldn’t play or talk. What was the point of them, she wondered.

That changed when she took a plant physiology class in college, part of her plan to become a biological patent lawyer. The “magic” of all things flora — specifically their ability to thrive in unfavorable conditions — soon enthralled her. “It takes cleverness,” she says. “Many of us have seen a plant bend toward a window in our home, or if they lose a limb, other limbs emerge. They’re able to reorient themselves. Humans just pick up and move.”

Today Montgomery is a plant biologist, teaching and leading a lab at Michigan State University that explores how photosynthetic organisms respond to changes in their environment. Her observations inspired her first book, Lessons from Plants, published in April. In it, Montgomery suggests that we look at our leafy cohabitants not as inanimate objects, but as resilient beings with wisdom to share. They’re extremely adaptable, for one, and they understand the value of balance and reciprocity — important lessons for living in an era of rapid climate change.

Montgomery doesn’t just research how and why plants make excellent mentors; she also studies the art of mentoring. Her passion for the subject started when she joined a mentorship collective at a previous workplace and talked with colleagues about how, much like humans, plants rely upon and support one another. She’s conducted and published studies on how best to guide and retain young talent in academia, and has won awards for her efforts. But her insights can apply to any endeavor, from the arts to activism. Her unique approach calls for “environmental stewardship”: helping a mentee break down structural barriers in their way rather than teaching them to conform to a flawed status quo.

As a Black woman in STEM — fields where people who look like her are scarce — she’s learned just how crucial it is to have an advocate who will do that. And as a biologist and gardener, she’s learned that she achieves the best results by being attuned to what her charges need and putting in the work to deliver it. “If we had a wilted plant and it was sitting next to a faucet, nothing’s going to happen unless there’s a steward to turn the faucet on and transfer the water to the individual,” she says.

Fix talked to Montgomery about the top plant-inspired lessons to keep in mind as we work to overcome urgent environmental challenges, and how we can support each other in the process. Her comments have been edited for length and clarity.

Q. If we look at plants as mentors, what are some lessons we can learn? 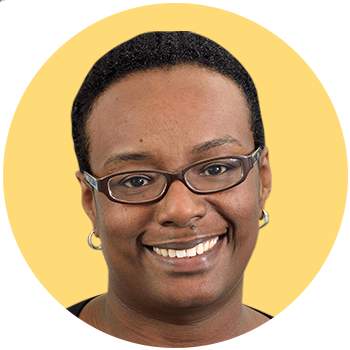 A. The diversity of plant communities, and the resilience and productivity that emerges from it, has been a powerful lesson. You rarely find plants growing only with their own kind. There’s biological evidence that plants often grow better together than they would in isolation.

As part of an Indigenous farming practice known as The Three Sisters, [Native peoples] plant corn, beans, and squash together. Corn is considered the first sister, who grows tall toward the sun. The second sister is the bean, a viney plant. In the absence of the tall sister [providing] physical support, the bean would grow along the soil and be subjected to things that would limit its growth. Beans also are a legume that can fix atmospheric nitrogen into a form that’s considered a fertilizer. It makes enough fertilizer for itself, but also pays some back to the first sister for providing support. The third sister is squash, which grows very low and compact and, often, around the edges of a field. In doing so, it can block weeds from getting in and competing, and it also keeps the soil moist for the other two plants. The beans give some fertilizer to it, and the corn’s height provides an optimized environment for the squash. At the core is this principle of reciprocity.

Q. You’ve written a lot about mentorship and how it often calls for addressing systemic issues within a culture, not just to help an individual mentee, but to help future mentees.

A. I study how plants respond to light. We understand that light is a critical factor for plants to grow and survive, and that it’s an external factor. In traditional mentoring, we focus so much on an individual’s limitations and whether we can fix them. One of the most powerful lessons that I’ve gotten from plants is that sometimes it’s the external environment, and the ability for an individual to be well-positioned within that environment, that leads to success.

I work in the life sciences, which have an underrepresentation of women as well as people from historically marginalized backgrounds, whether that’s racial, ethnic, or socioeconomic. The structures are set up to disadvantage people. If students want to go to a conference, they have to pay for everything themselves — the registration, the hotel, the airfare — and get reimbursed at some later time. For people who don’t have savings, that can be a barrier, and conferences are where you’re most likely to meet people who will hire you for a job or invite you to opportunities.

If you don’t point that out as a systemic barrier, [the students] may be sitting in shame that they don’t have the resources everyone else has. It’s our human nature to assume there’s something wrong with us, and those kinds of things set up fertile ground for cultivating imposter syndrome. I strongly believe in pointing those things out, so that people aren’t holding the weight of a systemic problem as an individual weight.

Read more from the Mentorship Issue
‘Each one teach one’: 6 environmental leaders of color imagine how mentorship can be more inclusive
Camille Williams

Q. I’m curious if you have thoughts on why mentorship is important within the activism space, especially climate activism.

A. A friend of mine out in California, Torie Weiston-Serdan, runs an organization called the Youth Mentoring Action Network. She works with young people, and many of them are activists. She invited me to a gathering where there was a panel of young activists talking about their experiences. One of them was talking about how activists in climate change spaces develop a voice that can get people to listen. They can pull collectives together. But sometimes they get invited to do things like write an op-ed. Or a funder may come forward and say, “We need you to write a two-page proposal.” Those things don’t require the same skills as when you’re working with people on the front lines of climate change. Those are the kinds of things that mentors can be helpful with.

Q. If someone came to you and said, “I want to mentor young climate activists,” what advice would you offer?

A. You may want to do one-on-one mentoring with them, but it’s crucial to get them to work as a collective. Peer-mentoring circles and different forms of mentoring are critical to helping people work together while also advancing each of the individuals. In activism spaces, one person may be the speaker, while another coordinates resources, like water and bail funds. How do you get that network to come together?

I also think a lot about what can happen in mentoring moments. When Torie brought us together, she said, “I don’t think that any of you are going to mentor all of [these activists] for two or three years, but if you can get people in a space and have some concentrated time, I think that’s powerful.” If someone is starting a new climate change initiative and you can get them an hour or two with someone who’s been successful in the queer space or in Black Lives Matter, and they get two hours to talk about the most important things, that’s a mentoring moment. Sometimes we undervalue the role of that. You can get people to commit to that, when they don’t have the bandwidth to take on someone as a long-term mentee.

Q. You study how plants respond to changes in their environments. As the world grapples with radical changes to our climate, what wisdom can we borrow from our plant mentors?

A. Individual changes are not enough. We have to have ecosystem changes. Plants function in community and not just as individuals. I was talking to a friend who lives in a neighborhood with lots of walnut trees. His neighbor was agitated by the trees, because when they have a really good set of nuts in a particular year, all the black walnuts in an area will [release them] at the same time. It’s a coordinated effort, because if any tree decided to set fruit in a particular year, the birds may eat all of that tree’s nuts, and there would not be offspring. But when there’s this coordinated effort, the massive production means that some of the seeds will escape rotting or being eaten, and there will be the next generation.

The trees recognize that this may be an optimal year and there is communication and coordination among them that increases the likelihood that they continue to exist. You see that [among humans] with voting registration; that’s when people understand the power of the collective. We have to bring that understanding into our daily lives to have an impact on climate change — but not just when there’s a crisis and everything’s about to fall apart. How do we bring pockets of that power to our lives more regularly?

From fiction to reality: the potential of plastic-eating organisms

Milking microbes instead of udders, precision fermented dairy is ready to tackle our reliance on cows