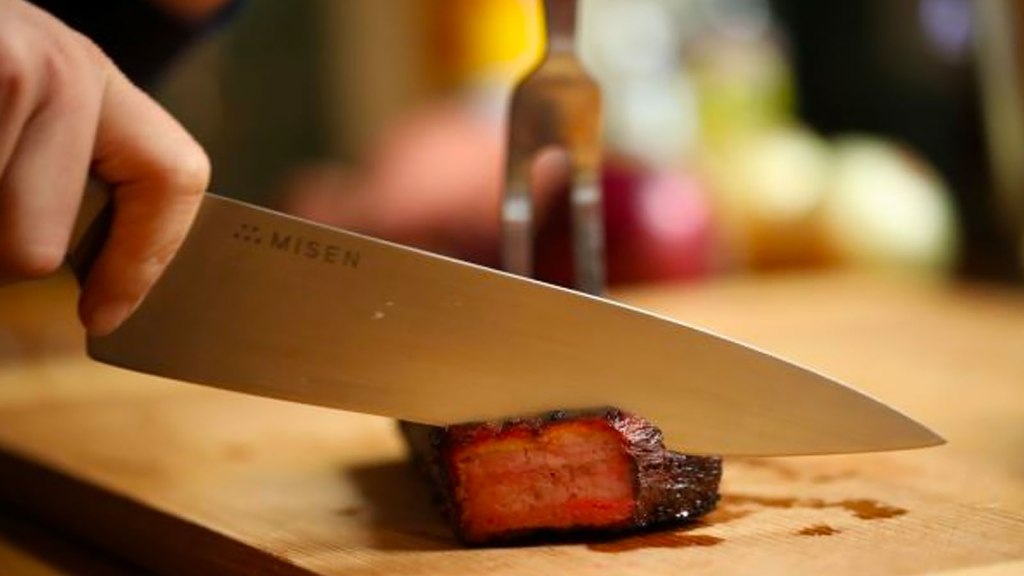 Meati's “full-muscle steak” is made from mushrooms. Meati
uncanny valley

I’ve been thinking back to just a few years ago: It was a simpler time, when, at a nice family dinner, my conservative dad could reasonably scoff at the veggie option on the menu, and I, a worldly college sophomore, could reasonably look down my nose at the menu’s meat. It was an era of balance and harmony, when animal and plant proteins fit neatly into their own categories, and God looked down on it, and it was good.

Then along came the Impossible Burger, a veggie burger that bleeds. And when my college co-op ordered them in bulk, raw and frozen, my frantic attempt to cook one — WHY was it still PINK!!! — left chunks of plant goo hopelessly crusted onto a previously well-seasoned cast-iron pan.

So began an era of food-group-bending products that would lead us to today’s screwy world, which includes meat grown in laboratories and “full-muscle steaks” made out of mushrooms. And, try as I might to understand that there’s nothing creepier than mass animal slaughter and planetary devastation in the name of continuing to eat Big Macs … all of this not-quite-meat business is really creeping me out.

Thinking about cultured meat or full-muscle mushroom steaks makes my calves tingle (weird, I know) and my throat constrict (rendering said meat unswallowable, probably) — essentially how I’d react to seeing real blood or exposed bone. Which is ironic, because they’re the only kinds of meat that don’t involve those things.

I’m not saying it’s logical. I’m just saying I can’t be the only one.

I’m certainly not the first to worry about this “uncanny valley” situation. Like the robot face that’s just a little bit too close to the real thing for comfort, modern meat dupes might be disturbing precisely because they’re almost meat. Almost, but … not quite.

Culinary biochemist Ali Bouzari captured my jitters about faux flesh in a video interview with Wired: “This better behave exactly like a chicken nugget in every way, shape, and form, or I’m going to freak out.”

Some of the good folks behind “cell-based” meat (the artist formerly known as lab-grown meat) argue that their invention totally avoids the uncanny valley. If they take a cell from a prime, field-raised, happy, healthy chicken and culture it in the lab, the resulting flesh will taste like prime, field-raised, happy, healthy chicken, they explain. (And one can assume that if they take a cell from one of those sad chickens from the Tyson commercials and culture it for mass consumption, it’ll taste, well, sad?)

It’s not just exactly like meat, they explain. It literally is meat. It’s just grown in a big blob inside a humongous metal vat. How can that be creepy?!

Still, get them off script for a minute and even the most staunch defenders of cell-based meat admit that there’s something strange about it.

Josh Tetrick, the founder of JUST, Inc., which has recently added cell-based meat to its repertoire of plant-based (and chuckable!) liquid egg, has plenty of examples of people not quite knowing what to do with cultured meat. One woman, surprised by her first bite of JUST’s cell-based chicken, exclaimed “it tastes like chicken!” (“It is chicken,” Tetrick said.)

When JUST serves that chicken, as one does, surrounded by bread and mayonnaise and lettuce in the form of a sandwich, people unfailingly pick it apart to get at the meat itself like some sort of toddler Sherlock Holmes. Some vegetarians, who are purely in it for ethical reasons, refuse to eat the cell-based meat at all, Tetrick says, despite the fact that it ostensibly fits into their worldview. It’s just too close to the real thing.

But that’s all well and good with Tetrick: He doesn’t really care if vegetarians eat his poser protein. His mission is to tackle climate change, and people who already forego meat aren’t going to make any less of a dent if they’re suddenly eating a whole bunch of chicken out of a vat. To make a difference, he needs to convert the carnivores.

I’m sorry to rain on that parade, but according to a 2018 survey conducted by Surveygoo (it’s a thing), it’s actually the vegetarians and vegans who are hungry for a cell-based meat option. Among Americans in general, one-third said they would not eat cell-based meat — but half of vegetarians and over 60 percent of vegans were willing.

I get that: For a lot of vegans and vegetarians, it would be pretty sweet to eat meat that doesn’t have all the ethical and climate baggage. For people who are already happy with the real thing, what’s the point?

Granted, people’s thinking may be changing. In the two years since the survey was conducted, we’ve seen an explosion of diets that aim to pare down or eliminate meat consumption. 2019 was “the year of the vegan.” Meanwhile, the Impossible Burger made it to American mainstays like Red Robin and Burger King (and did remarkably well, other than that whole lawsuit thing). Colonel Sanders even went Beyond Chicken.

And now, a company called Meati is vying for the attention of America’s carnivores with its “whole-muscle steak,” cultured to mimic animal flesh from the fast-growing, fibrous root structure of a mushroom. Its founder, Tyler Huggins, hopes to roll out the product in steakhouses with chefs who built their careers on meat. And he’s got a sales pitch that he thinks will appeal to his family and friends in rural Montana: Unlike Impossible and Beyond, which sacrifice health for flavor (though not any more than a beef burger does), Huggins says that Meati is healthier than the real thing.

While climate considerations or animal welfare concerns might not convince everyone, the prospect of a red-meat substitute that won’t increase your risk of heart disease is like having your steak and eating it, too.

Huggins isn’t convinced by my uncanny-valley hypothesis, either (though he did say his company is moving away from the “whole-muscle” lingo, which made my calves relax just a little). In fact, he said, it’s real meat that’s creepy.

Sigh. Of course these guys don’t care about the uncanny valley. They literally live and work inside it! They’re, like, five minutes away from starring in a disconcertingly agrarian Uncanny Valley Farms commercial! What would they know?

In search of a more objective opinion, I called my dad, the aforementioned conservative guy from rural Washington state who was known to feed me entire boxes of Hamburger Helper when I was a kid.

Noted. But he did admit, “I might get creeped out the more I knew about it.”

Good point, Dad. Americans are weirdly divorced from where our meat comes from. We buy it from grocery stores wrapped up like a fruitcake. We avoid animal-rights protestors carrying slaughterhouse footage on iPads like the plague.

If meat that falls into the uncanny valley forces us to start making conscious decisions about what, exactly, we’re putting in our mouths … well, I guess I’ll just have to get a stronger stomach.