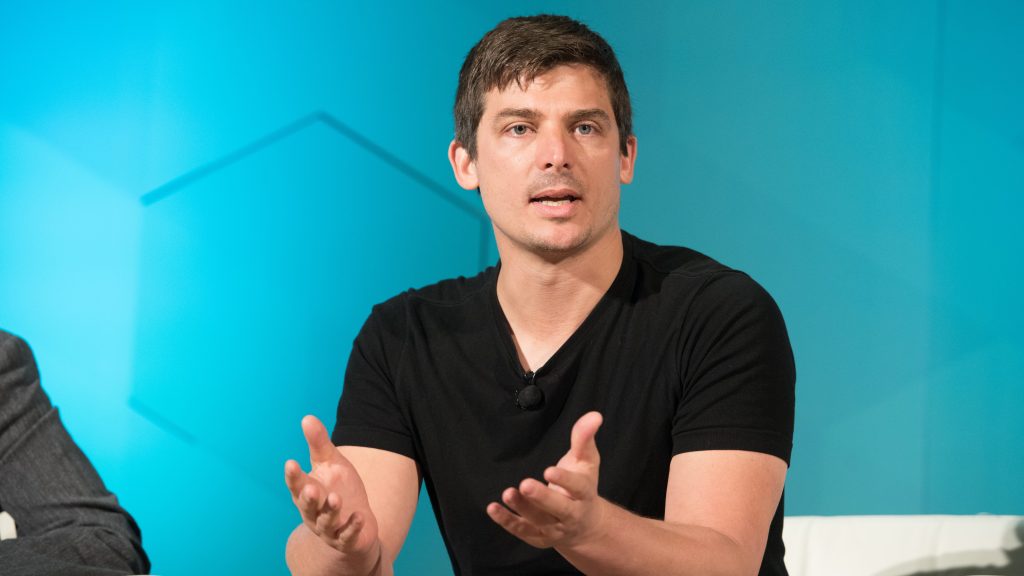 In 2019, we’re pretty used to seeing meat substitutes that convincingly imitate the real thing. But satisfying vegan eggs are a rare bird — how could you possibly imitate the texture of an egg? The sulfuric umami? The satisfying “splat” it makes upon contact with the home of your nemesis?

Josh Tetrick, founder of JUST, Inc., thinks plant-based eggs are crucial to reforming the food system — and his San Francisco-based food tech company promises its bottled, plant-based egg can scramble with the best of them.

His journey started like many conscious eaters’ do: When Tetrick was a teenager, a friend told him about all of the terrible things that go into creating the food that we eat, from human rights issues, to animal welfare abuses, to animal agriculture’s role in exacerbating climate change. But instead of becoming a fair-weather vegan like the rest of us (hey, my nana’s Thanksgiving turkey is amazing!), Tetrick decided to spend his life “trying to figure out a way to use the energy of capitalism to fix the food system.”

It hasn’t all been gravy. In addition to some tussles with Big Egg and the FDA over whether its products could legally be called egg and mayonnaise, JUST — formerly Hampton Creek — was accused of hiring workers to buy its mayo off store shelves (inquiries were dropped); watched Target pull its mayonnaise off of store shelves because of food safety and labeling concerns (the FDA confirmed the product’s safety soon after); and got hit with a lawsuit by rapper Jaden Smith, who claimed JUST violated a trademark agreement with his bottled water company of the same name. There have also been complaints about working conditions, including an alleged attempt to surreptitiously shorten severance packages (which Tetrick apologized for in a company-wide meeting, some former employees told Business Insider). A mass-exodus from JUST’s corporate board drew attention, too (although former board members maintain that it was a friendly split). Even Tetrick’s late golden retriever, who supposedly had a propensity for testing cookie dough samples (and vomming near the research kitchen), got wrapped up in the scandals.

But JUST is moving forward, Tetrick said in an interview last week. JUST Egg 2.0 rolls out at Whole Foods nationwide at the beginning of April, and the company’s cultured meat chicken nuggets are set to make their debut not long thereafter. I guess we finally know which came first.

The following has been edited for length and clarity.

Q. Your company’s had its fair share of controversies. What have you learned from them?

A. We need to put our heads down and focus on doing really good work with integrity. The most important thing that you can do is to focus on the work, which, in the most concrete way, is hiring really good people that give a damn. The more you can have human beings around you that are fixated on doing the right thing, and being thoughtful about fixing mistakes and moving the company forward, the more everything sort of takes care of itself. You adjust, and you become better, and then you move on.

Q. What inspired you to reinvent the egg?

A. The reason we start with the egg is that it’s the cheapest, most abundant source of animal protein on the planet. About a trillion eggs were laid last year. Those eggs required billions of chickens, and those billions of chickens eat billions of pounds of soy and corn. Soy and corn require all of this land and all of this water to grow. That’s not only an environmental issue — we also think it’s a human rights issue, because [about] a billion people are going to bed hungry, and maybe it’d be better if they ate those crops.

Q. How’d you go about finding the plant that could scramble like an egg?

A. I was living on my ex-girlfriend’s couch, running experiments in her bathtub. Eventually, we got people that actually knew what the hell they were doing to join the company — and it took us over four years, but we found something that could do it.

We eventually settled on the mung bean. It gels at the right time and at the right temperature, and its sustainability metrics are really good. [Author’s note: Citing several scientific papers, JUST claims that mung beans have a 72 percent lower water footprint than soy, and produce 31 percent less CO2 emissions.] We think it’s pretty awesome that if you look at this thing that’s been around the food system for so long with a slightly different perspective, it becomes an omelette. You don’t have to try to fuck with nature.

Q. But can you egg a house with it?

A. Open the bottle — don’t screw the lid on too tight, loosen it just enough — and then hurl the bottle at any part of the house. By the time it actually hits, the lid will fly off, and you’ll have liquid plant-based egg going all over the house.

Q. You used to squabble with Big Mayo — Unilever sued you, saying you couldn’t call your product mayonnaise because it didn’t have any eggs in it — but they’ve since copied your vegan mayonnaise. Is the food industry turning a corner?

A. It’s funny to think back — there was one individual that was wanting to pay someone to stop our initial distribution into Whole Foods. There was another that — I believe, jokingly — talked about putting a hit out on me. Things have changed a lot. Big Mayo and Big Egg used to go after us. Today our best partners are actually egg companies. At the end of the day, I want this better stuff to get out into the world faster, and they want to try to figure out a way to be around for another 50 years. There’s an alignment there.

Q. What’ll it take to get Americans to shift to more sustainable eating habits?

A. People today are not going to grocery stores and making bad food choices because they’re uncaring. They’re doing it because the bad thing is just fucking easier to do. It’s cheaper to do, it’s tastier to do, it’s more efficient to do, you don’t have to think about it. I think the best thing we can do, all across the board, is just make it easier to do the right thing.

Q. You know what would make being vegan easy for me? Cheese that doesn’t suck. You gonna hop on that?

A. Probably not. Egg is hard! We’re on version two, and we want to continue to drop the cost down [Author’s note: JUST Egg’s suggested retail price is $7.99 — more money and less product than the most expensive egg carton I could find at Whole Foods], continue to make it healthier, continue to make it tastier. And version three will splatter on people’s houses even more — exponentially! We’re building the company on the foundation of egg, and we’re also going to be doing things in meat — so we’re going to have to leave it to other companies to figure out the cheese thing.

Q. What’s your vegan holy grail (other than egg, of course)?

A. I’m trying to go back to my Alabama days — I was going to middle school outside Birmingham, and when I’d get off the bus every day, my mom would give me like ten chicken wings. Bone, skin, the whole thing. It’s a wing. If we or some other company could ever figure out a way to do that — I’d be an investor.

Q. What gives you hope for the future?

A. The thing that gives me the most hope in the world is the fundamental truth that if we make the right thing easy, people will do it. And it doesn’t have to get any more complicated than that.