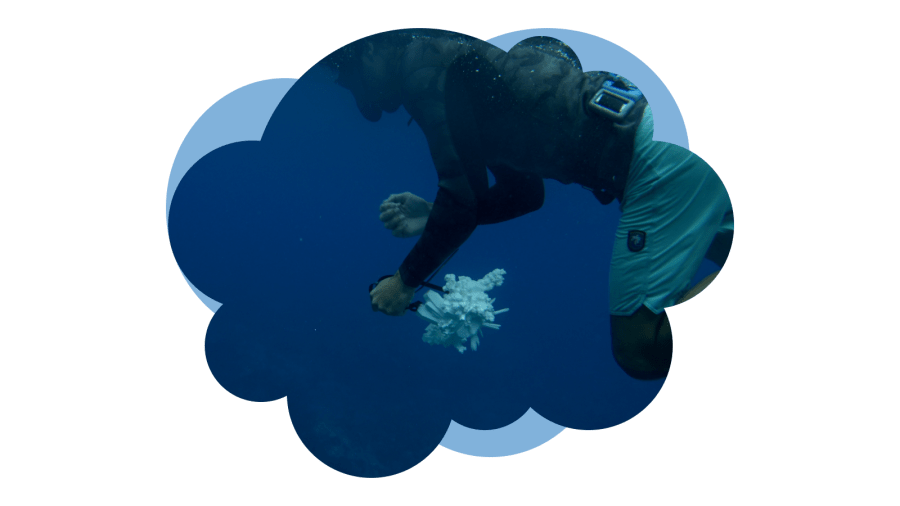 She was a child of the tides — born from the warm sand and raised within the currents, where microplastics and anthropogenic chemicals no longer lingered.

Beneath the surface, she felt the coolness of the sea on her fins, as she glided along the glistening waves.

With a tender push, she flowed through the deep, diving gracefully toward the reef.
A blissful array of vibrant species greeted her, as sunbeams familiarly kissed her shell and said, “Welcome home.”

This magical place, once barren, had been restored.

And the heart of the ocean continued to abundantly beat on, along with her own.

— a drabble by Avery Schuyler Nunn

Off the coast of Kailua-Kona, Hawaii, Cliff Kapono plunged into the Pacific Ocean with fins on his feet, a weighted belt around his waist, and a 3D-printed piece of artwork cradled in his arms. Stroke by stroke, he approached the sea floor and tied the fractal-like chunk of polymer material to a submarine pipeline that rests above a coral reef.

This was the first step in an experiment to determine whether synthetic coral stand-ins can help to repair these threatened ecosystems. Like a surgical graft that replaces a missing bone, Kapono and his team at the Multiscale Environmental Graphical Analysis (MEGA) Lab in Hilo, Hawaii, hope that this 3D-printed transplant will take — that it will become colonized by fish, encourage growth from natural coral, and help to rebuild the bleached, damaged reefs. 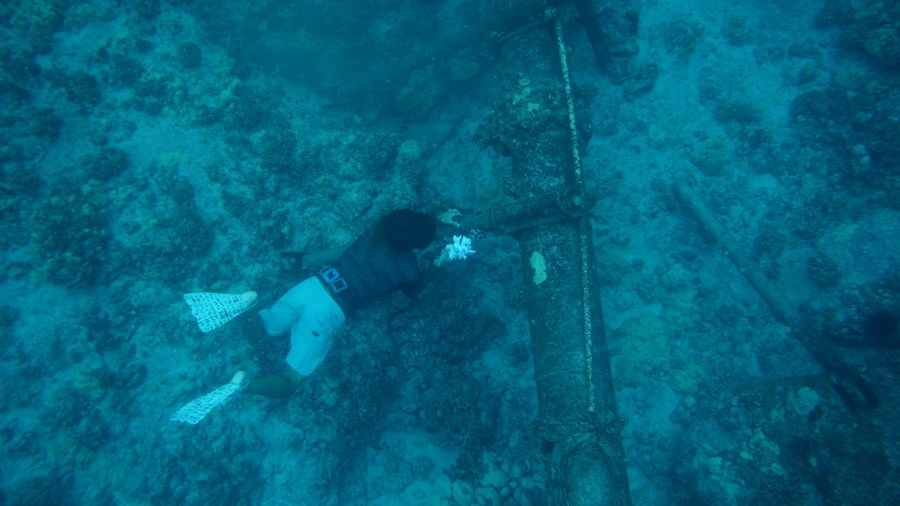 ​Coral reefs are some of the most productive, diverse, and treasured ecosystems on earth. They support thousands of species, from the green sea turtles that munch on coral algae to the octopuses that seek shelter in their nooks and crannies. They play a vital role in ocean health, which, among other things, is crucial to providing oxygen for the very air we breathe. They provide a structural buffer to our coastlines, protecting against waves, storms and erosion — a particular concern along the shores of Hawaii.

Corals are also particularly sensitive to global shifts. In the past decade, some 14 percent of the world’s reefs have been lost to bleaching events caused by human activity and rising ocean temperatures. Coral bleaching, a stress caused by shifting conditions that turns reefs completely white, leaves the coral vulnerable to disease, uninhabitable by marine life, and under threat of dying completely.

In Hawaii, protecting the reefs takes on an even deeper meaning beyond the ecosystem services they provide. Reefs support a variety of species that are a daily food source for local residents, and they also hold historical and cultural significance. “In Hawaiian culture, coral is respected and revered as an ancestor and elder,” says Kapono, a Native Hawaiian, professional surfer, and chemist. “Our creation story starts with coral and ends with humans.”

He points out that, although corals may appear about as distant from humans as life on earth can be, we actually have some biology in common — corals have an immune system that relies on PAF, an inflammation-triggering molecule that is also present within the human heart and lungs.

Kapono cofounded the MEGA Lab, along with reef ecologist John Burns, in order to bring this connection and perspective to coral research. At the lab, scientists cultivate new and authentic pathways to environmental stewardship by blending conservation, creativity, originality, and Hawaiian culture.

Michael Joo, an artist based in New York City, was introduced to the MEGA Lab through a mutual friend. At the time, Joo had been working on a project that combined 10,301 unique works throughout the NFT art world, fitting them together to create a physical reef system that would be displayed in museums across the globe. Meeting for the first time in Hawaii, Joo, Kapono, and Burns pondered over breakfast: Perhaps, if they installed the 3D-printed, coral-like fractals into the ocean, they could study whether these artificial structures would be accepted into the reef, and help restore it. 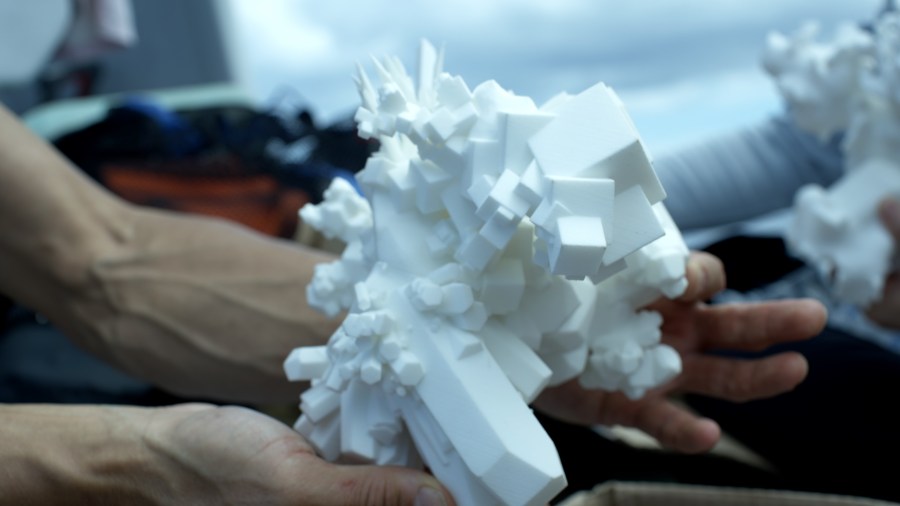 “When we put them underwater, they really looked like coral,” Kapono recalls. “There’s even some shapes that look like sea urchins or other coral structures. It’s really cool to see that, somehow, Michael was able to make this artificial-reef art piece really mimic nature.”

Maluhia Kinimaka, a professional surfer, engineer, and the newest MEGA Lab team member, will be leading the reef research. She’s observing how the environment reacts to the prototypes and will ultimately work with Joo to install an entire 3D-printed reef.

While the goal of reef restoration is important for climate resilience, the cultural significance is of equal importance to Kapono and his team. It’s a showcase of how celebrating identity, personal experiences, and passions leads to creative ideas that could make a difference on our planet.

“Together, Maluhia and Michael will be able to look at how this Indigenous perspective isn’t just a thing of the past,” says Kapono. “They’ll be able to combine it to what is contemporary, and how that relates to culture and solutions. It’s a unique project that combines the past, present, and future.”

So, you might have heard that a big-deal piece of climate legislation was passed this week. On Tuesday, President Biden signed the Inflation Reduction Act (IRA) into law, locking in billions of dollars for clean energy and environmental justice initiatives. Is it a perfect bill? No. Is its passage still historic, significant, and a win that the climate movement can continue building on? Yeah. There are plenty of stories out there exploring those questions in more nuance — here are a few we recommend diving into:

Fix’s short-fiction contest, Imagine 2200: Climate Fiction for Future Ancestors, has been chosen as a finalist for the Utopia Awards — which are determined by public vote. We’d love your help in showing the contest some love! Check it out and toss us a vote before August 21 (we’re in the Utopian Curator category).

We’ve also got two panels in the running for next year’s South by Southwest festival: “The Future of Climate Coverage is Solutions-Based,” and “How Stories Shift Power: Climate in Film and TV.” To vote, make an account on PanelPicker and then smash the up arrow on the two links above. We appreciate it!

The MEGA Lab’s 3D-printed art won’t be the first attempt at an artificial reef. All over the world, marine ecologists have tried submerging vessels, statues, and other structures to provide habitat for reef species. Here’s a particularly neat-looking (3D-printed!) one installed by green engineering project RECIF’LAB, off the southern coast of France. 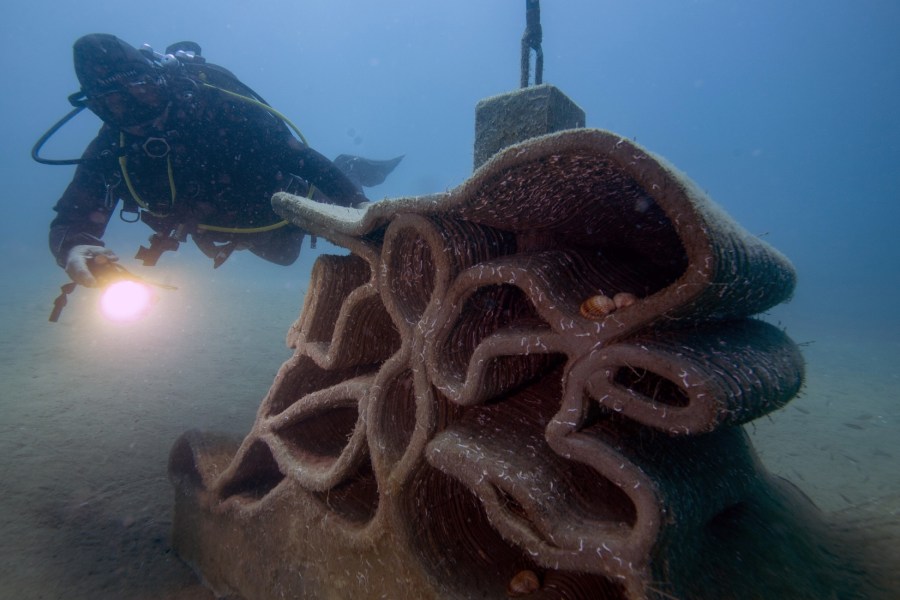 3 ideas for a sustainable summer picnic