In portions of rural America, residents lack access to safe wastewater sanitation. Without proper infrastructure, people on septic systems, mobile-home owners, and even those attached to sewer systems may end up with raw sewage streaming into their yards or backing up into their homes. The exposure contributes to diseases, some of which we thought we’d eradicated in the U.S. Catherine Coleman Flowers, a 2017 Fixer, discovered just how widespread this problem was when she returned home to Lowndes County, Alabama, around two decades ago — and as a lifelong activist, she resolved to do something about it.

As the founder of the Center for Rural Enterprise and Environmental Justice, Flowers works toward health and economic equity through the lens of climate justice. She was recently awarded a MacArthur “Genius” Grant and is the author of a new book, Waste: One Woman’s Fight Against America’s Dirty Secret, which was published last week and chronicles her work to shed light on this often overlooked issue.

In 2019, I visited Flowers in Lowndes County, which has been called “Bloody Lowndes” due to a long history of horrific violence against African Americans, including lynchings. She and I met with local residents who struggle with flooding and failing sanitation systems, a changing climate, and diseases that have spread as a result. More recently, I had the chance to talk with Flowers at a Fix event on the future of climate and racial justice. Below are some highlights from our conversation, edited for length and clarity.

Q. What are some of your early memories as a young activist?

A. I grew up with activist parents. I would meet people like Stokely Carmichael. I remember Stokely because of his voice and his Caribbean accent. I only later found out how famous he was. I met people like Willie Ricks, who was actually the first person to say “Black Power.” I met a lot of people that came from around the country to be a part of that movement.

I went to Washington in the summer of ’75 and got a chance to meet Senator [Ted] Kennedy. He asked me, “What’s the name of your school?” I told him. He said, “Did you know that name denotes that it’s a school for delinquent children?” I didn’t know. I went back home and talked to my parents. I said, “I do not want to graduate with ‘Lowndes County Training School’ on my diploma.” So we fought to get the name changed, and we did get the name changed. When I graduated, it was Central High School.

Q: You worked as a teacher in North Carolina, Washington, D.C., and Detroit, among other places, before returning to Lowndes County in 2000. What changes did you see there?

A. I was starting to see the evidence of climate change, and I was also seeing evidence of people eating fast food and so forth. A lot of people had gardens when I was growing up, and a lot of people cooked. They were moving away from that. I noticed a lot of people were sick. I would see people that were my age, and they looked older and they had illnesses that I couldn’t imagine. I was trying to figure out what was going on.

I got involved with the county as a consultant doing economic development. I felt we could make changes and bring in some of the businesses that people took for granted and services that people took for granted in other places. That was when I found out about the lack of infrastructure. In the course of that, I found out about the wastewater problem.

Q: Tell us about the challenge of wastewater, which has led to numerous health problems in the area.

A. I grew up in Lowndes County and I remember having an outhouse. I remember having what we called the slop jar — people from rural communities will know what I’m talking about. I remember when we didn’t have water, and people had to go to Miss Nell’s house to her pump and carry water away in buckets. I thought all that had changed, and I realized that in some parts of the county, it hadn’t.

Q. People were being arrested and prosecuted because they lacked functioning septic systems, even as they were denied basic services and the infrastructure needed to install them.

A. Yeah. I’ve been granting a lot of interviews since the book has come out. Some [reporters] have talked to people at the health department. I’m just so bewildered by the fact that the state health department, to this day, denies that anybody was ever arrested for not having a septic system. We have copies of arrest records. It just shows you the politics and organizations that were put in place to protect the public health are more about spinning things that are not true instead of telling the truth so we can all get to the answers.

A. My work has focused on exposing the problem because I’ve had to fight a state agency that wants to blame the victims, criminalize the victims as opposed to finding meaningful solutions. There’s no accountability. And of course, if a system fails — even if the county sewage lagoon fails — they put the onus on the homeowner.

You had the opportunity when you came to visit to meet Miss Charlie Mae. She could hardly breathe, but she made it to the road to meet with Reverend William Barber II and former Vice President Al Gore. She talked about the years that she’s had to deal with sewage coming back into her yard and sewage coming back into her home. And she pays the wastewater treatment fee! 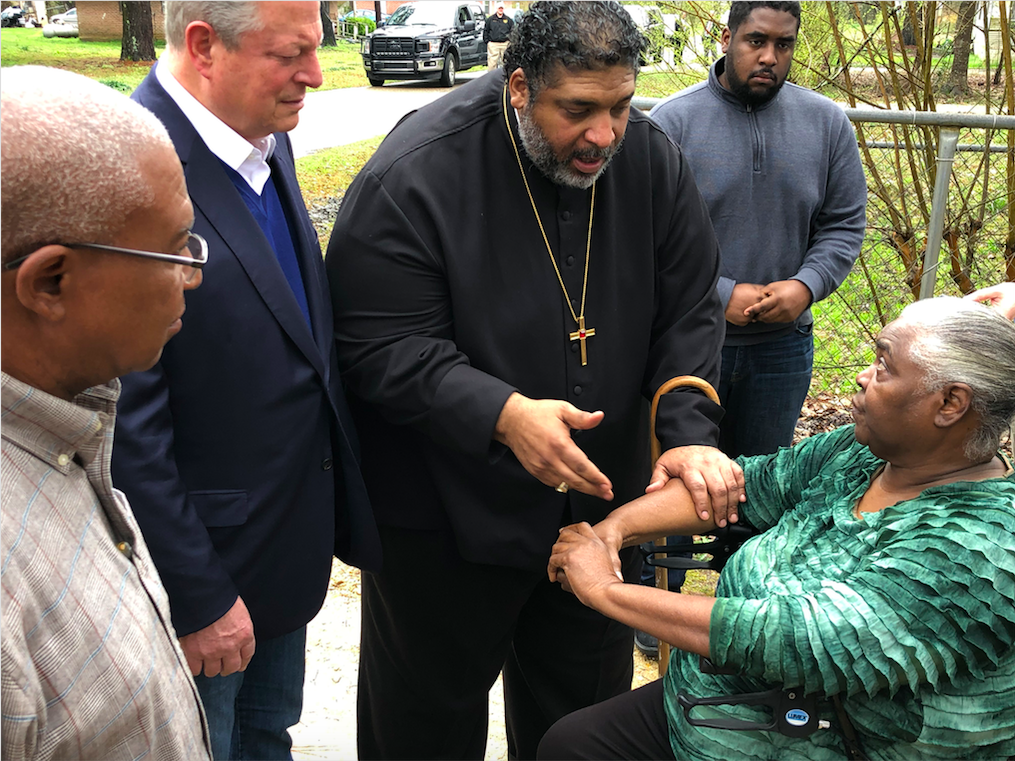 Q. Her home is attached to the county sewer system, yet her yard floods with this stuff and it fills into her house.

A. Yes. She’s had all kinds of illnesses, some of which I’m sure are associated with being exposed to the town’s sewage.

The work that we’ve been doing hopefully sheds light on it so that [agencies] can stop criminalizing people. It’s not just in Alabama. I’ve learned of instances where people have been arrested in other parts of the country, where the individuals are held responsible. And if they can’t afford to pay for the septic system or other improvements, they’re either told to move out of their homes or they’re criminalized. Where would they go?

Q. Could you tell us about the related hookworm problem that you helped uncover in the county and explain its links to climate change?

A. I knew that some people looked sick and I couldn’t figure out what was wrong. I read an op-ed in the New York Times by Dr. Peter Hotez of the National School of Tropical Medicine at the Baylor College of Medicine. He wrote about tropical diseases being here on our shores. I was wondering about that, because I was also noticing climate change. I was seeing vegetation generally found in arid or semi-tropical areas. I wondered, “We’ve got all this raw sewage on the ground, and it’s getting warmer.” I also had had an experience of being bitten by mosquitoes near raw sewage and breaking out in a rash. All my tests were negative. That’s when I asked, “Is there something American doctors are not trained to look for because they don’t expect you to be living around raw sewage?”

Q. Hookworm was believed to have been eradicated in the 1950s in southern states, right?

We had all the conditions not only for hookworm, but also for other tropical parasites — and they found a number of them. We collected fecal, blood, soil, and water samples. And it was through there that we were able to find these tropical parasites.

Q. What keeps you going and gives you hope?

A. I’m a person of faith, so I pray a lot and I feel that there is a power greater than me. If I didn’t feel that way, it would be hard to do what we do every day and to see what we see. And I allow myself to feel. I think that when we do this work, we sometimes have to shed a part of who we are. But Lowndes County keeps me human. I get hope from people there who probably haven’t read a book in a long time, people that I know in my family that haven’t read a book in a long time, but they’re sending me pictures of my book. They’re happy to see me speak on behalf of people who have been ignored for far too long.