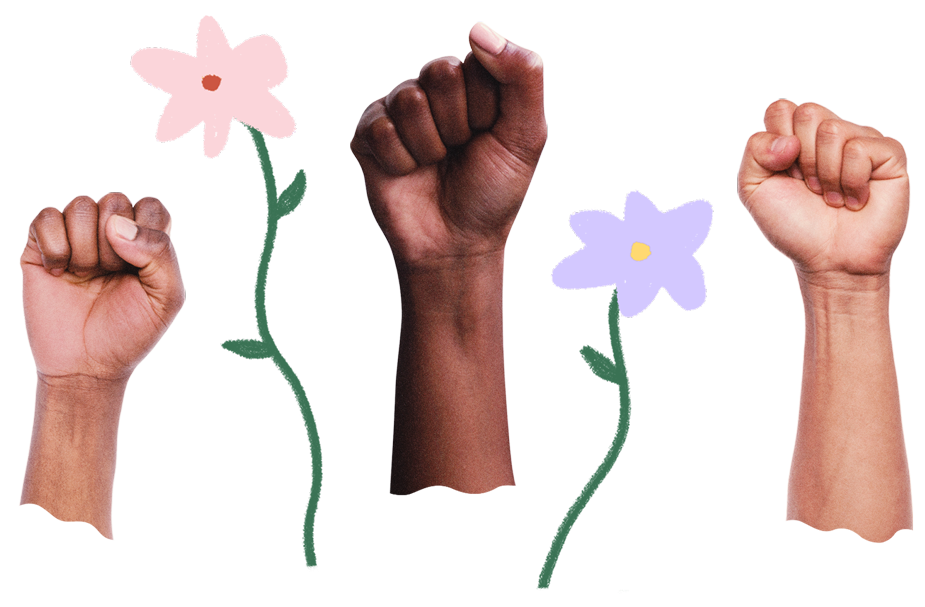 An environmental justice organization, well funded and powered by community voices, advocates for residents’ needs and brings its expertise to local and national policymaking.

Those goods are the result of a global supply chain that has taken a holistic approach to sustainability, changing the lives of millions of workers.

What’s behind this picture? “Holistic, comprehensive development,” “a diversity of perspectives and backgrounds in all environmental policymaking,” an end to “the exploitative nature of market capitalism.”

— a drabble, based on visions of the future from Robert Bullard, Charles Lee, Peggy Shepard, and Baldemar Velasquez

This year marks the 30th anniversary of the first National People of Color Environmental Leadership Summit — and, in many ways, the birth of the environmental justice movement. From October 24–27, 1991, 300 delegates and over 1,000 attendees converged on Washington, D.C., to give voice to the struggles that communities of color were facing all over the country. A few years prior, the United Church of Christ’s Commision for Racial Justice (the summit’s key sponsor) had produced a report titled “Toxic Wastes and Race in the United States,” which illuminated the pattern of hazardous waste facilities being located in communities of color.

The term “environmental racism” was born — and communities responded by coming together to define environmental justice. The 1991 summit marked a shift in defining “the environment” not as parks or conservation areas, but as all the places people live, work, and play. Out of the summit also came the 17 principles of environmental justice, which remain foundational to the movement to this day. From the beginning, those principles included things like workers’ rights, health care, environmental education, and “the fundamental right to political, economic, cultural and environmental self-determination of all peoples.”

For this edition of the newsletter, we asked four environmental justice leaders from that first summit in 1991 to share their experience with us — what the vision was that brought them all together in Washington, D.C., what it was like to be there, and how the movement marches on today. Their responses have been lightly edited for clarity.

Baldemar Velasquez, president of the Farm Labor Organizing Committee: My history goes way back to the Civil Rights Movement. I started organizing farm workers in 1967. We had made so much noise that the Southern Christian Leadership Conference got a hold of us, and Dr. King invited me to come down to Atlanta to help plan the Poor People’s Campaign in 1968. Dr. King had decided that the Civil Rights Movement was not just a Black issue. It was a class issue. And that really caught my imagination. Fast forward, I carried with me that image of uniting oppressed people, regardless of their color.

Charles Lee, senior policy advisor in the Office of Environmental Justice at the EPA: Back in the late 1980s, a letter was sent to the heads of the 10 main environmental organizations, taking them to task on two basic issues. One was the lack of diversity. And the second was the policies they were taking that were either neglecting or were actually detrimental to the interests of communities of color.

My boss at that time was the Rev. Dr. Benjamin Chavis. He called for a summit, which was cast as, “Let’s all go sit down and scratch this out.” It would be important to make this a moment that was really empowering and really defining — and the way to do that was to bring all these people together and make a statement, and create the basis for coalescing a movement.

Robert Bullard, distinguished professor at Texas Southern University (and fondly known as the father of environmental justice): I think that ’91 was a year that environmental justice research started to take off. I wrote Dumping in Dixie , and it was getting read by a lot of people and being adopted at universities. And lots of people were saying, “It’s not just Dixie.” So we decided to focus on environmental racism, expanded from the South to include the whole United States. The timing was right, in that the issues were really bubbling up to the surface.

Charles Lee: This thing began to have so much momentum, by the time we got to D.C., [there were] 1,100 people from [across the states] and Central America, Puerto Rico, Marshall Islands, Canada, and I think one or two people from Africa, even. It really started to have this big reach.

There were two things that we wanted to do [at the summit]. One was to codify a set of principles of environmental justice, and the second one was [to issue] a call for action — to go back home to your areas, to organize and to form networks at the grassroots level.

Peggy Shepard, executive director of WE ACT for Environmental Justice: It was breathtaking. This had never happened before. We didn’t know each other — and suddenly you’re in a room with 300 people who are all talking the same language, who all have a similar struggle and had felt like they were alone, that their community was the only one that had this problem.

It’s transformational. You leave there and go home with a renewed commitment and an excitement because you’re really part of something that isn’t just a problem in your community. You’re a part of something that’s system-wide, that you now understand you need to come together and struggle against.

So there were all of these networks, they all had convenings, and we all visited each other’s convenings so that we continued to stay in strong contact.

“Suddenly you’re in a room with 300 people who are all talking the same language, who all have a similar struggle and had felt like they were alone.”

Peggy Shepard: I think that we started trying to stop the bad stuff, and we’re still doing that. Over the years, we’ve evolved to understand that we also have to impact public policy. A lot of that was because we also began to get more funding. It’s very easy to protest and organize direct action with no money — [WE ACT was] successful in suing New York City around a sewage plant, getting a million-dollar settlement from our lawsuit, and we never had more than $7,000 over six years. But that does not allow you to hire staff, hire a policy person, make sure you can get up to your state legislature or get to Washington. You need money and resources to do that.

The evolution today is that more environmental justice organizations are involved in federal policy. Not that many, but a few of us are getting more resources to engage more effectively.

Charles Lee: The Biden administration’s agenda just didn’t pop out of the blue. A lot of it was pioneered in many ways through efforts at the state level. Justice40 has its roots in things like California’s program around climate investments, where 25 percent of the proceeds from the greenhouse gas reduction fund went to disadvantaged communities. Illinois had a similar version of that, and New York state upped it to 40 percent. When President Biden came to office, that became one of the centerpieces of the executive order on tackling the climate crisis at home and abroad.

There’s a possibility now of moving huge amounts of resources across the board, and that’s going to have a rippling effect. And so that calls for newer forms of organizing that involve [frontline] communities, as well as governmental institutions, philanthropy, and academic institutions all working together.

Robert Bullard: I’ve been working on this stuff for 40 years. But we don’t have 40 years to tinker around the edges when we talk about climate. I think young people are more inclined to say, “No, the urgency is now. It’s what we need to be focused on.”

It gives me hope, because every social movement in this country that has been successful has always had strong, fearless young people leading the charge, and actually pushing the envelope much further than then their elders. Those of us [fighting for civil rights] in the ’60s, we were not afraid to go to jail. We’re not afraid to get expelled from school. We were not afraid to challenge the system. So I see the potential for younger [generations] to change the script and to make justice and equity a core principle that will drive climate action.

How do you show up for environmental justice? Reply to this email and share what you’re reading, paying attention to, or doing differently in your life to build justice into your environmentalism.

Last time, we asked y’all to share how you’ve made meeting your neighbors a community climate solution. Here’s a response we got from reader Dulanie La Barre, in Ojai, California — thanks for sharing!

Having produced an educational film about emergency preparedness … I have been well aware of the need for neighborhood preparedness. I decided to extend our family’s preparations with my ‘block’ of neighbors. So on the 4th of July (pre-COVID) a few years ago, we hosted a block party. We gave out copies of the DVD and had a sign-up sheet for them to add family members (especially the young and very old), with their phone and email, number and name of pets (evacuation prep), special skills (nurse, contractor, bilingual, etc.), resources (extra food, water, tools) along with their address. Everyone got a copy of the completed list. It’s time for another block party.

A deadline extension: Didn’t get your nominations in for the next Grist 50 list of emerging climate leaders? You’re in luck — we extended the deadline one more time, to next Friday, November 19. Send us the names of your favorite up-and-coming activists, entrepreneurs, chefs, tech wizards, and beyond who are making change for a better planet. The 2022 Grist 50 list publishes in March.

A view of COP26 — this year’s most important climate summit, where some of the leaders featured above are currently in attendance, and where justice has been a primary focus outside the roster of official events. This past weekend, 100,000 protestors took part in a march for climate justice. Here, Indigenous leaders from the Amazon perform a blessing ceremony at Cormonachan Woodlands, a temperate rainforest in Scotland, drawing attention to the role of Indigenous people as ecosystem stewards. 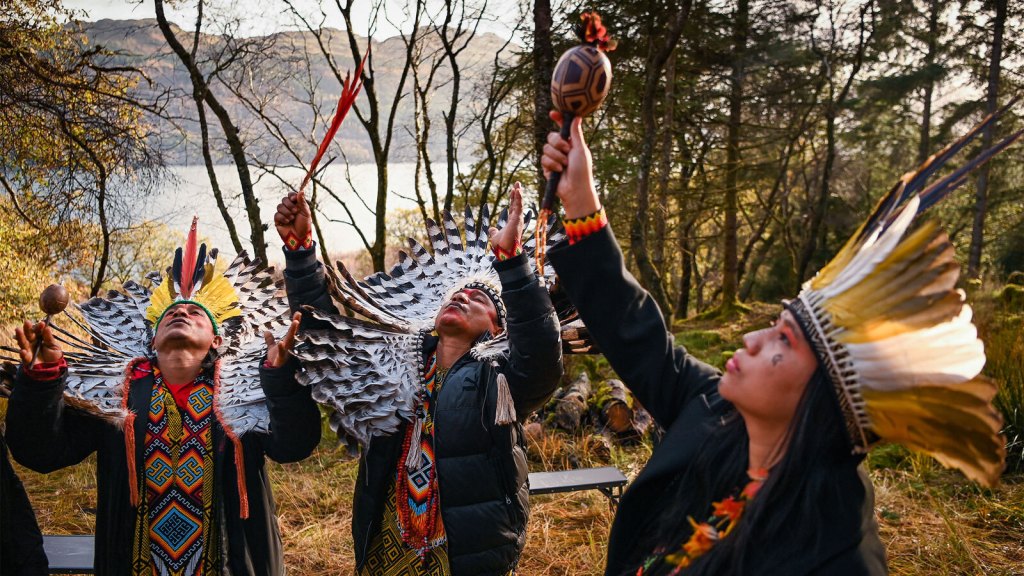 Meeting your neighbors is a climate solution