The Colorado River hasn’t reached the sea in ages. Is there hope left for this storied but manhandled river? Jonathan Waterman, author of Running Dry: A Journey from Source to Sea Down the Colorado River, brought together two experts from either end of the river to talk about what’s happened to the river over the years, and how to get more water flowing in the future.

Brad Udall is the director of Western Water Assessment, based out of the National Oceanic and Atmospheric Administration (NOAA) offices in Boulder, Colo. Osvel Hinojosa works as director of the water and wetlands program from the Mexican environmental group Pronatura.

Jonathan Waterman: So while you’re both involved a lot with agencies that have to do with safeguarding water and the Colorado River throughout the basin, we’ve also chosen to talk with you because you live, essentially, at opposite ends of the spectrum — in the state of Colorado near the headwaters, and then in the Mexican delta, where the river runs dry. And these are ideal positions to show the range of river issues. So if you guys could introduce yourself and your work, especially your work related to the Colorado River. Brad Udall: I work for the University of Colorado where I’m on the research faculty. I run a program here called the Western Water Assessment which is supported with NOAA funding. We utilize a team of 30 researchers to look at climate issues in the American West with the idea to help folks — decision-makers make better decisions with respect to climate. And when I say climate I mean what we can learn about past climate — for example, tree-ring studies — what we know might happen in the next six to 12 months, and what we might know into the future, say 100 years out, because of climate change. The 30 people that are associated with this program range from climate scientists to economists to policy folks, environmental scientists, you name it — we’ve got access to them, and we’re trying to produce the best science we can. In particular, my area of expertise is the Colorado River basin, and I’ve been party to a number of studies that look into the future of this river. Osvel Hinojosa: I work for Pronatura in Mexicali, based mostly in the delta region and upper Gulf of California. And we have been working on the restoration of the Colorado delta for almost 10 years now, working with organizations from both sides of the border. We have been doing  basic research to understand the issues and how can we restore the delta that is feasible, and then we have also been involved in active restoration and community work, monitoring, and more recently a lot on the water issues. We’ve created a water trust with some other organizations to purchase water and restore the flow in the Colorado River delta.

JW: Great, thank you. Brad, I’ll start with you again in the headwaters. What are the biggest challenges for water sustainability, for both humankind and natural habitat today in the Colorado River basin?

BU: When I think of sustainability issues with regard to the Colorado River, it really revolves around how much water is going to be in the river in the future, and are we using what we have now wisely. Like most Western states, roughly 75 percent of all the water here goes to agriculture. The remainder goes to municipal and other uses. The model projections for the future of the river show us anywhere from 10 to 20 percent reductions in flows mid-century, and obviously more possible by the year 2100. And if these come true, and there are many scientific reasons to believe that they will, it means we’re going to have to take a hard look at how we’re using water, and is there in fact any left to develop? Or maybe we’ve already overdeveloped what’s here. So it’s a challenge on almost any aspect of water management, from the critters needing water to live in, to humans, to agriculture, to even our new energy economy here in Colorado, which potentially, depending on how it evolves, might utilize significant amounts of water that might in fact not be here.

JW: And I’ll hand it to you, Osvel, in terms of water sustainability in the Colorado River basin, what do you think the biggest challenge is? This infographic shows how much of the water is used for agriculture and how much goes toward industrial and municipal use. (Click for larger version.)OH: Well, I agree with Brad in that sense, and a lot of the [problem] came from the past and extended to the future. I mean, clearly the river was overallocated, and in different locations was given away to different cities and municipalities in the U.S. and in Mexico, too. The environment was not considered. And so into the future, we’re facing this challenge: How can we figure out a way to meet those allocations that have already been given away, and then at the same time how can we recover that water to retain environmental functions? So it’s quite hard. At the same time, I guess that this challenge and the stress into the system has opened a lot of dialogue that used to be closed between water managers, between agencies between countries, and also we have environmental organizations’ water managers. And so the discussion is more open, to try to collaborate and find solutions.

JW:When was the last time the river flowed into the sea, through the delta?

OH: The last event when there was water flowing from the Colorado River into the Gulf was around 1998-1999. There were big flow releases from the dams that reached into the Gulf of California. After that, there were some small releases that almost reached the upper Gulf, but not quite. Then there was a big earthquake on April 4 this year, causing quite a bit of damage in the irrigation system in Mexicali. So most of the Mexican allocation of water was directed into the river. So for a few days, there was water flowing into the river into the Gulf of California.

JW: I didn’t realiz
e that, I thought most of those systems were patched.

OH: Well, there was significant damage in the canal system, over 80,000 acres of land. So Mexico was not able to deal with the water delivery, so they would just open Morales dam. And for four days, there was continuous water from the Morales dam into the Gulf.

JW: The Morales dam — the diversion dam — is the only one owned by Mexico that brings water west toward Mexicali rather than toward the delta. So either of you — are we still in a drought today? The drought that started nearly a decade ago. I’ll toss that to you, Brad.

BU: Absolutely, yes. It’s the biggest drought in the historic record since 1906 or so, when we started keeping records in the Colorado River basin, and it’s really significantly a more pronounced drought than the next-nearest drought. You can look at droughts in a lot of different ways, but one way to look at it is in 10-year period flows, and this period of 10-year flows is 3 percent more than the next nearest period, if you will. Which doesn’t sound like a lot, but when you’re talking about flows over 10 years, it’s a huge amount of water. I think Lake Mead, for example, would be almost 50 feet higher if we were in the next-nearest drought, just to give you an idea. And Mead has dropped approximately 100 feet during this 10-year period.

JW: Can you clarify for people who might be in the Rockies that have seen snowfalls that are approaching average over the last few years, why the drought continues?

BU: Sure, and you’re right, I’m looking at a graph right now of precipitation over the last 10 years. And there were three years that were really bad at the beginning of the 2000s, 2001-2003. Almost all the years since then have been about average in terms of precipitation. But runoff has been significantly less. And we believe that these significantly high temperatures that we’ve been experiencing, especially over the last 10 years because of man’s emissions of greenhouse gases, have reduced the runoff in the river. What our research shows is a couple different things: We can develop relationships between temperature and runoff, and precipitation and runoff, and it appears that this system is very sensitive to increased temperatures. And as temperatures go up, and this is the reason for these predictions for 2050, even if you have the same amount of precipitation as we currently have for snow and rain, you get significantly less runoff as the American west heats up due to climate change. View the entire Colorado River basin and investigate water issues using this National Geographic map. (Click for larger version.) JW: That’s fascinating. So to recap that, even though skiers have been having a heyday the last three winters, at least in the Colorado Rockies, it doesn’t translate to water runoff because the temperatures are much warmer throughout the year.

BU: That’s correct. And there’s another little piece to the puzzle here, brand new science — red snow that shows up in Colorado in the springtime these days. And it appears that all this dust, which is originating out of Arizona and Utah, is impacting runoff in very interesting ways. We think it might be leading to an average decrease of 5 percent runoff every year.

JW: And that’s because of the evaporation?

BU: Yes, the dust sits on top of the snow, and as the snow begins to melt in the springtime, the dust doesn’t sink down through the snow pack; it sits on top and absorbs more solar energy. Some of it evaporates, and because the snow melts sooner, the plants begin to use water sooner. So it’s a combination of two different forms of what scientists call evapo-transpiration, both evaporation and transpiration of water used by plants. 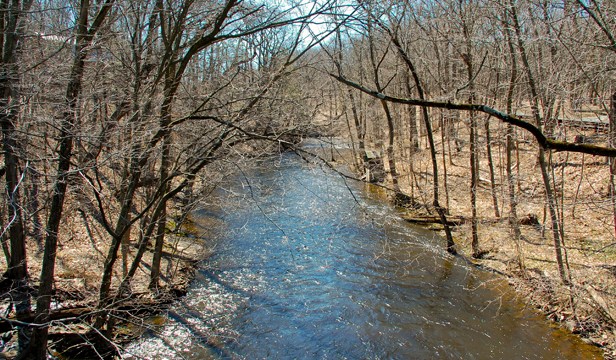 For the first 18 years of my life I lived along the final 17-mile stretch of the Passaic River. That’s the dirty, ugly part of the river that passes through the most crowded, industrialized part of the United States. The …

In June 1983, Newark’s close knit Ironbound community was overrun by investigators in Hazmat suits after EPA officials found dioxin at the Diamond Alkali chemical plant site.Photo: wirednewyork.comOn the morning of June 2, 1983, the governor of New Jersey declared …
See all articles in this series