It seems like there’s always some good news about clean energy: We are breaking records, building more solar panels and wind turbines every day!

You can see what’s going on in the following charts. First, improving energy efficiency (orange) is now big business. That’s great! Investments in renewables along with new transmission lines and batteries (the blue rectangle labelled “networks”), now dominate the electricity sector. Great again! But then there’s that big honking red section, which swings things back in the other direction. 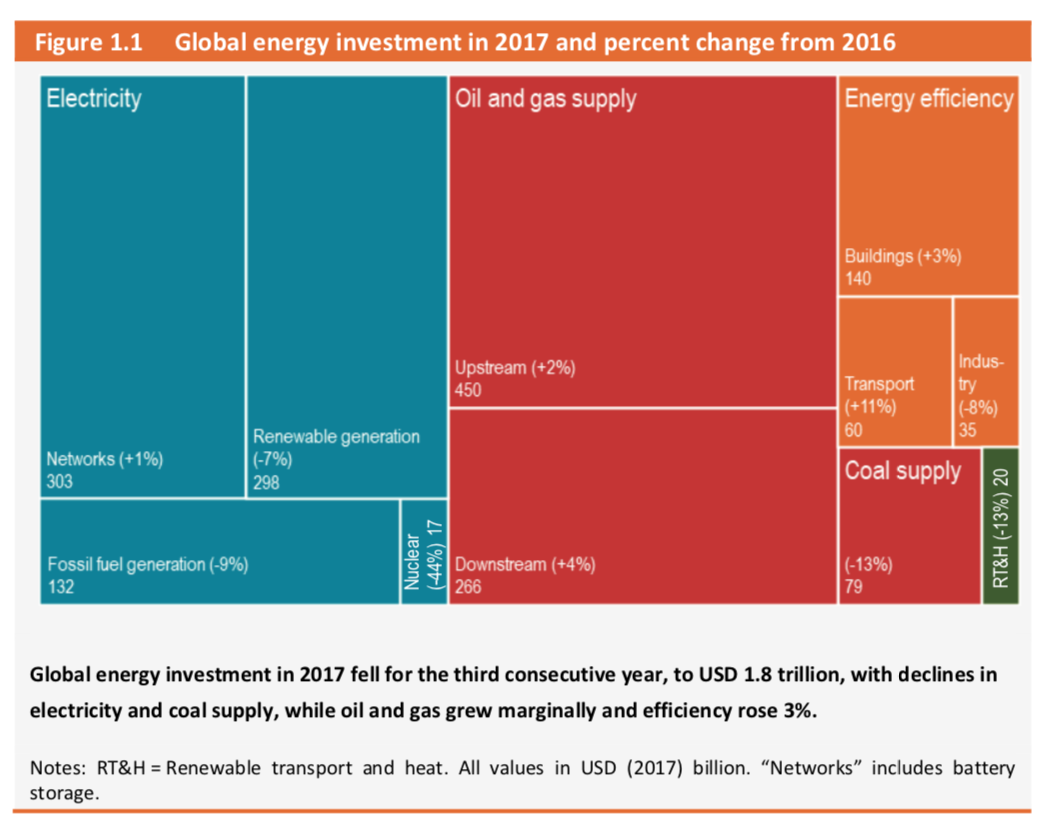 “Investment in all forms of clean power, as well as in networks, would need to rise substantially,” according to the IEA report, for the world to have a shot at keeping climate change below 2 degrees Celsius.

So what happened to all that good news about renewables? Well, it’s real. Investment in solar photovoltaics reached record levels in 2017, while the price of solar power was falling fast, which means those investments are getting more bang for the buck. Investment in offshore wind also hit a record last year, but investment in land-based wind turbines, hydropower, and nuclear fell. The world put nearly $300 billion into renewables, which is a lot, enough to dominate the electric power sector: 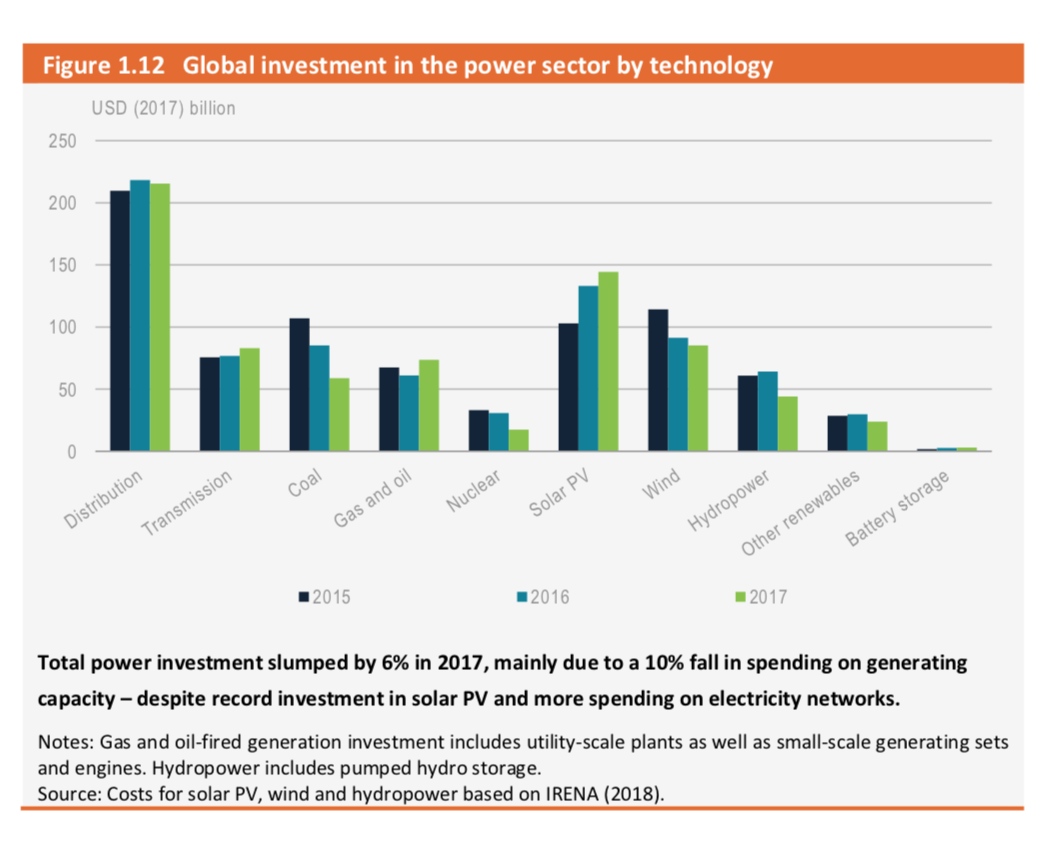 But that’s not as much as we spent on in oil and gas drilling and exploration (also known as “upstream” investment) — $450 billion. And that doesn’t count all the money that went into building new pipelines, refineries, and gas stations. 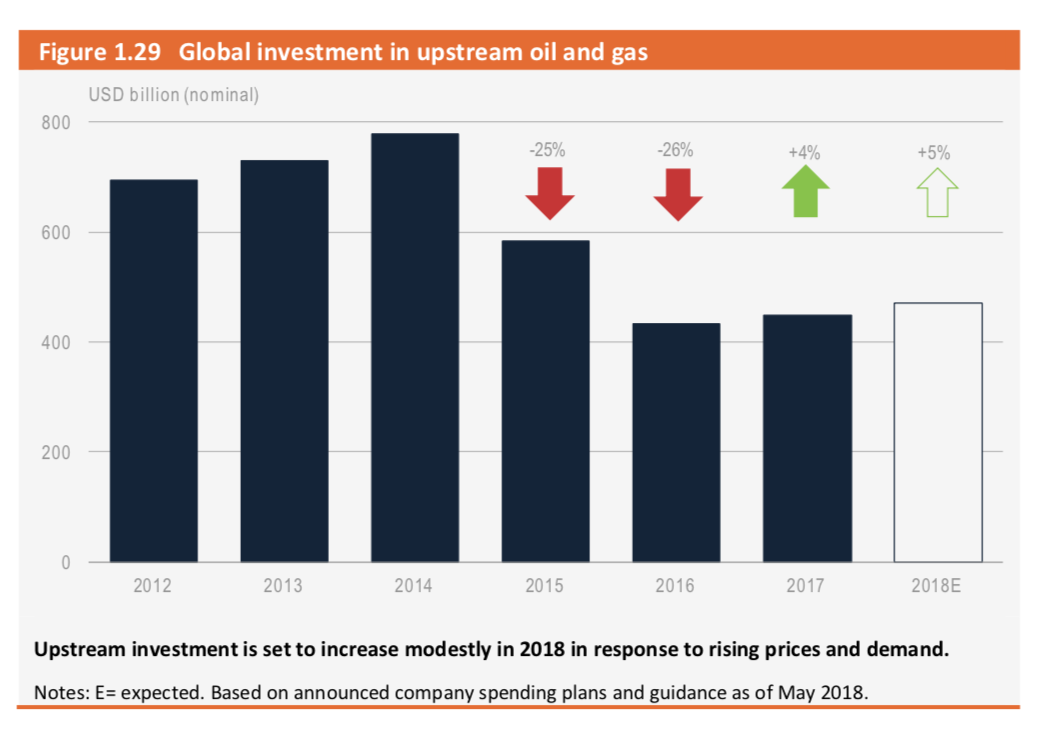 We could kick our addiction to oil by switching to electric vehicles. And, indeed, the world is spending lots of money on EVs. People spent $43 billion on them last year, and more than one out of every 100 new cars sold is electric. Investors are also putting lots of money into build the lithium batteries powering Teslas and Chevy Bolts: Funding for lithium mining has increased by a factor of 10 since 2012. 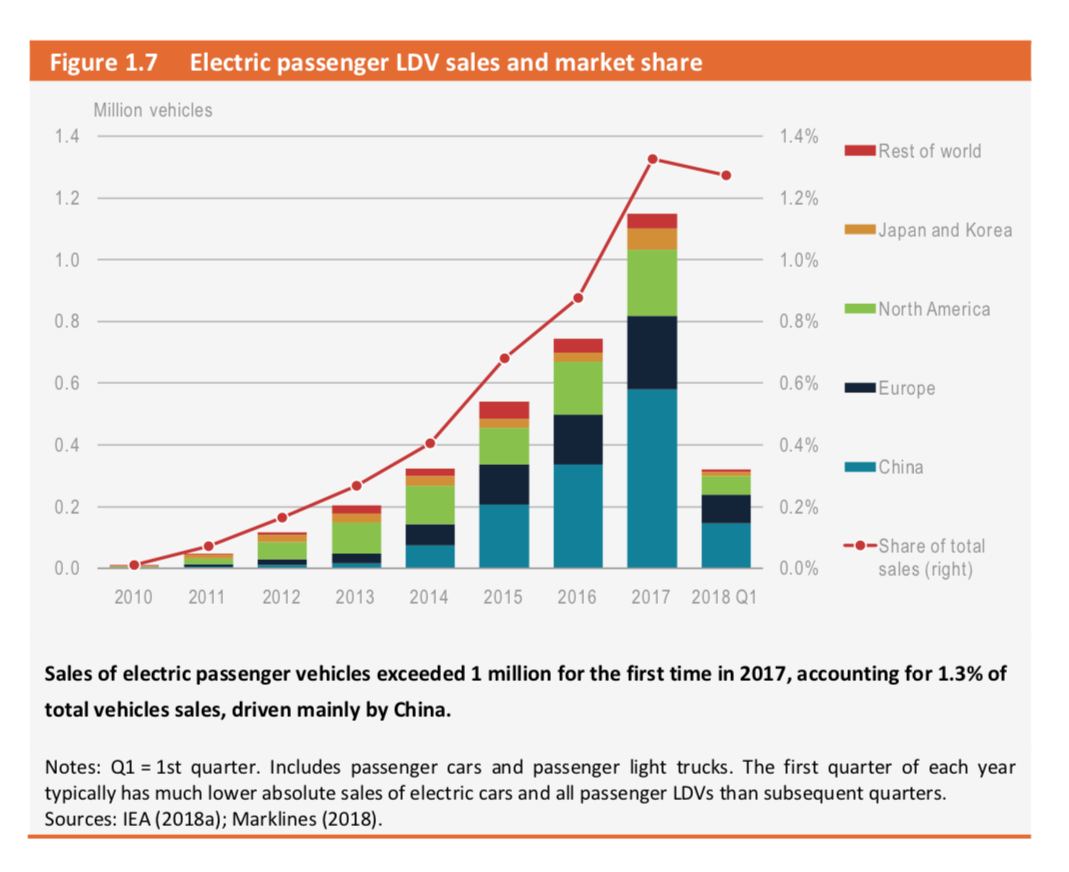 It’s good news but not good enough. All our driving and shipping and air travel caused oil consumption to grow by “1.6 million barrels per day,” according to the IEA. All the electric cars on the road trimmed consumption by 30,000 barrels a day.

If there’s a true bright spot in this report, it’s found in the section on government research. Around the world, governments spent $27 billion on energy research in 2017, a record high. Most of the growth in government R&D went toward low-carbon technologies.

As the costs of renewables fall, and more wind and solar power surges onto the electric grid, it can start to seem as if the market is taking care of climate change on its own. This report is a bucket of cold water to dispel that fantasy. Yes, there’s good news, but fossil fuels are still growing faster than clean energy.