Obama can't really do much about Standing Rock 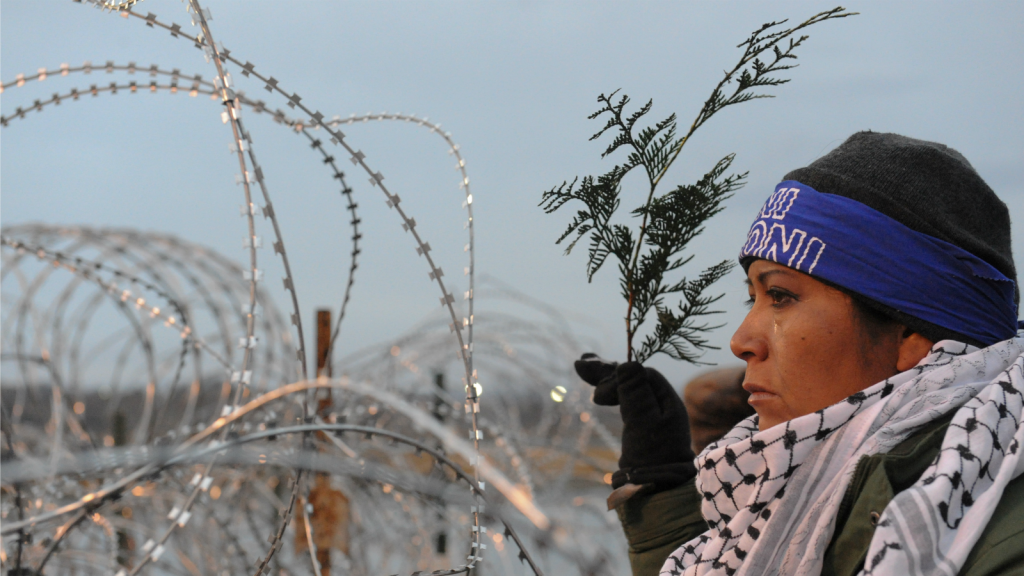 Obama can’t really do much about Standing Rock

The night of Nov. 20 was brutal for the activists protesting the Dakota Access Pipeline near North Dakota’s Standing Rock Sioux Reservation. As temperatures dipped below freezing, some 400 faced off with police over a bridge closed by the Morton County Sheriff’s department to block access to a pipeline construction site.

Videos show police spraying the activists with frigid water and firing rubber bullets. Twenty-six people were hospitalized, including 21-year-old Sophia Wilansky, who says her arm was nearly blown off by a concussion grenade thrown by police. The Morton County Sheriff denies using such grenades.

As the protests at Standing Rock become increasingly dangerous, calls for President Barack Obama to intervene are growing louder. An emotional video showing a 23-year-old member of the Standing Rock Sioux pleading for Obama to help his people has been viewed 1.5 million times. Standing Rock Chair Dave Archambault II repeated requests he made in October for Obama to “stop this pipeline.” And most damningly, prominent climate activist Tim DeChristopher wrote on Facebook that Wilansky’s blood is now on Obama’s hands.

But what, exactly, can President Obama do to protect the activists, and/or stop the $3.8 billion pipeline? According to three tribal law experts, the short answer is: not much.

“His ability to stop the pipeline itself is fairly limited at this point,” says Monte Mills, codirector of the Margery Hunter Brown Indian Law Clinic at the University of Montana. “As is … his ability to stop (the actions of) local law enforcement.”

Had Obama known sooner about concerns that the pipeline would threaten drinking water, he could have moved to stop it, as he did with Keystone XL, says Kevin Washburn, a professor of Indian law at the University of New Mexico and Obama’s Assistant Secretary for Indian Affairs from 2012 to 2015. When Washburn and Obama traveled to Standing Rock in 2014, though, “no one mentioned this to us.”

Now that the U.S. Army Corps of Engineers process for permitting the pipeline is nearly complete, both experts think it’s too late for Obama to intervene. By law, the decision falls to the Army Corps — not the executive branch — and short of firing the head of that agency, any action by Obama would require considerable overreach, and could be easily overturned by the next president. Not only that, it could send the message that it’s OK for Donald Trump or other presidents to force the hand of independent agencies.

“The reason these statutory and regulatory procedures are in place is to avoid arbitrary and unconsidered decisions by an executive,” Mills wrote to me in a follow-up email. “If such authority were allowable, you could imagine a president, perhaps for political or economic reasons, deciding to approve a pipeline without following the tribal consultation process at all.”

Sarah Krakoff, an Indian law professor at the University of Colorado, agrees — with one caveat. If the Army Corps’ permitting process was faulty, a president has more grounds for stepping in than if he simply disagrees with the outcome, Krakoff says.

Which raises the all-important question: Did the Army Corps adequately involve the Standing Rock Sioux when it approved the Dakota Access Pipeline? Obama hasn’t officially weighed in, but he has used his authority to better ensure that tribes are consulted on future pipelines. At the White House Tribal Nations Conference in September, the president told tribal leaders that the standoff at Standing Rock “highlights why it’s so important that we redouble our efforts to make sure that every federal agency truly consults and listens and works with you.” That same month, the Department of Justice, the Department of the Army, and the Department of the Interior issued an unprecedented joint statement asking the pipeline company to voluntarily delay construction, and requesting consultations with all 567 federally-recognized tribes. The consultations, which began in November, are meant to change the law so that tribes have a greater voice in infrastructure permitting in the future.

“Those efforts set the stage for ensuring that tribes are going to have a different and more meaningful role in the consultation and permitting process going forward,” Mills says. “In the long term, that’s a much more positive and groundbreaking outcome — no pun intended — than anything that would specifically come out of (stopping) the Dakota Access Pipeline itself.”

“But,” Mills adds, “I think it’s hard to see that right now, given the amount of heat surrounding Standing Rock.”

This doesn’t mean hope is lost for Standing Rock Sioux supporters. Independently — or perhaps with the president’s prompting — the Army Corps could reroute the pipeline around the contested Lake Oahe, which is what outgoing Senate Democratic Leader Harry Reid and others are advocating for.

As for intervening in police actions against Standing Rock activists, the decision would have to come from U.S. Attorney General Loretta Lynch, who could request that the Department of Justice review local law enforcement’s actions to see if they violate federal laws. President Obama himself could send in the National Guard, but that’s historically been reserved for times when state or local law enforcement ignores federal law or court orders.

Yet despite the limited scope of Obama’s authority, it’s easy to see why activists have reached out to him. Many Native American leaders I’ve spoken with think Obama has been more receptive to tribal issues than any president in history, and his strong track record gives activists hope. As tribal Chair Dave Archambault II told Democracy Now! in October, “he did so much for Indian country that [his legacy] is resting on this.”