The backstory on Standing Rock, the federal government, and tribal sovereignty 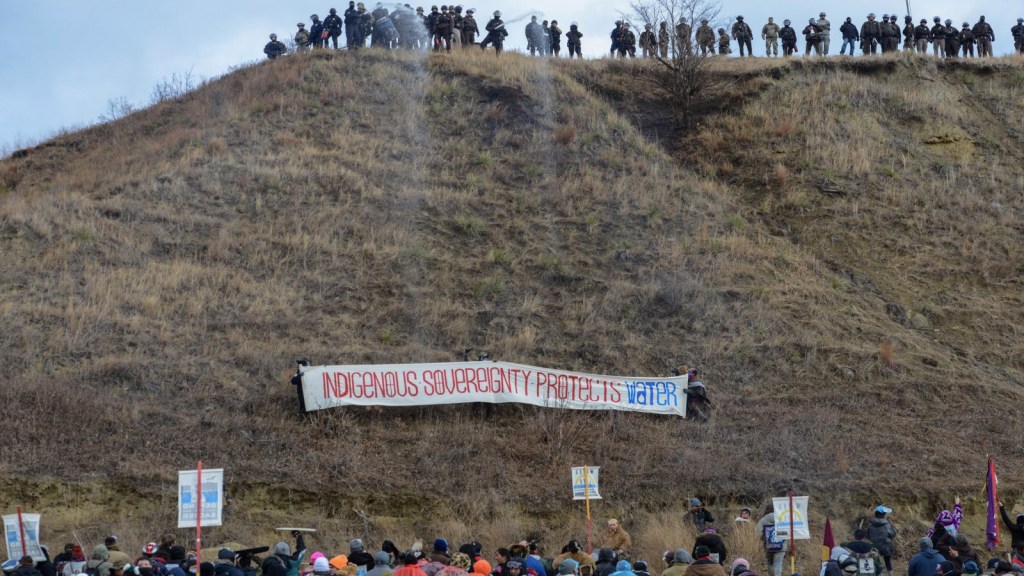 The backstory on Standing Rock, the federal government, and tribal sovereignty

Police in riot gear forming a wall across a road. Water cannons spraying water protectors in the night. The movement to stop the Dakota Access Pipeline has yielded many arresting images. But what you don’t see is just as important.

It’s the legal battle underway as the Standing Rock Sioux Tribe tries to stop a pipeline that would cross ceremonial and burial grounds, and also put a sole source of drinking water at risk. A federal court ruled earlier this year that the Army Corps of Engineers “has likely complied” with federal obligations to preserve these sites sacred to the Standing Rock Sioux. But the Corps still halted construction to review its handling of the process. And then the company building the pipeline sued to restart construction.

These lawsuits hinge on questions around tribal sovereignty, the body of law that steers tribal nations’ relationship with the United States government.

It’s a subject that’s crucial to understanding the effort to stop the pipeline, says Rebecca Tsosie, an expert on the subject and a professor at the University of Arizona Law School. In a recent interview with Grist, Tsosie talked about the unique relationship between tribal governments and the feds. The interview has been edited and condensed for clarity.

Q. Can you explain the origin of the legal concept of tribal sovereignty?

A. It comes from a famous trilogy of cases in the 19th century authored by Chief Justice John Marshall, the fourth chief justice of the U.S. Supreme Court. He was looking at the Cherokee Nation, which was in a treaty relationship with the United States. The Cherokee Nation had sovereignty that pre-existed the United States, and it had a territory confirmed by a federal treaty.

Marshall said that they’re nations like any other nation in the world. They govern themselves without any dependence on the United States; they govern their lands, their territory, and their people; and they engage in government-to-government relationships with the United States. He basically confirmed the self-governing nature of the Cherokee Nation on its territory and its immunity from state law.

Tribal sovereignty is an inherent aspect of a people organizing themselves as a nation and exerting authority over their members and their territory. Foreign nations do that, the United States does that, and Indian nations do that.

Q. So it’s not like Marshall handed tribal nations their sovereignty. He recognized that they possessed it already?

Within the United States today, there are many federally recognized Indian nations. These governments may or may not have a land base. They have jurisdiction over their members and over their reservation land. Tribes have police powers; they have the ability to regulate health, safety, and welfare within the reservation.

Q. How is a tribal government like the Navajo Nation, for example, distinct from a foreign government?

A. Today, the Navajo Nation is not a foreign nation within the U.S. It exists as a domestic-dependent nation — that’s the technical term used under federal Indian Law. That means it’s a nation with all the powers a nation has, except for those that would be inconsistent with the supremacy of the United States. So, if the Navajo Nation wanted to secede from the union, it couldn’t because it’s within the territory of the United States.

Domestic-dependent nations are under the protection of the U.S. government. We call that the trust relationship. The role of the federal government is to mediate between tribes and the states and various citizens.

Q. Has the federal government been holding up its end of that trust relationship when it comes to the Dakota Access Pipeline?

A. The Army Corps of Engineers presides over the federal land around and under Lake Missouri [where the pipeline is supposed to be built]. The federal government is under a duty to consult with indigenous nations before any project goes through on federal land that would endanger or jeopardize the multiple interests that indigenous nations have. The question now is whether the quality of the consultation was sufficient before the project started. That’s why the Army Corps suspended the permit.

Q. How should the federal government have handled it?

A. In my view, the process should have started much earlier than it did, and it should have been aligned with other processes. For example, with the Keystone XL pipeline, the agencies identified federally recognized tribes that had cultural and environmental interests in the area, and that was way before anyone even started construction. There were substantive, detailed consultations. That’s the type of approach that should have been taken with Dakota Access.

Q. The Supreme Court has shaped tribal sovereignty over the years. How do you think President-elect Donald Trump might shape the court?