Chuck Jay worked as a coal miner for nearly three decades before he decided to start his own solar panel installation company just outside Tuscaloosa, Alabama, in 2012. He had put panels on his own home a few years before and got hooked by the technology — not to mention the money he saved on his electric bill.

But just as his business was getting off the ground, Jay and a new customer were blindsided by a new charge from Alabama Power, the state utility company. To stay connected to the power grid — allowing households to sell back excess electricity on sunny days or draw power on rainy dark days — the customer would have to pay an extra $25 to $30 a month in fees.

Jay finished the installation, but the new fees have cramped his business. The extra charge eats up nearly all the money his customers would save by going solar. “It changed the dynamic totally of what I was doing,” he says. 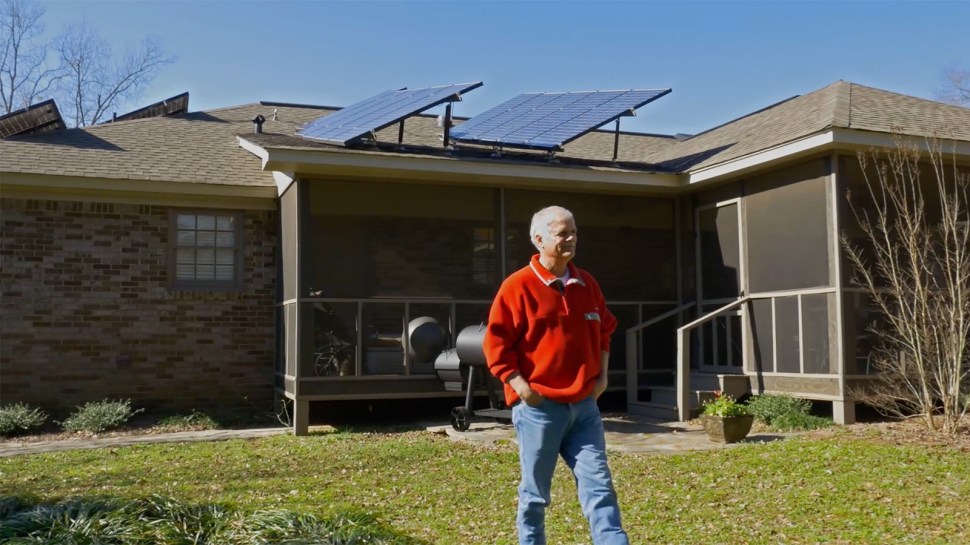 “It appears to be the most punitive charge on rooftop solar customers by any regulated utility in the country,” says Katie Ottenweller, a senior attorney for SELC and leader of the center’s solar initiative.

Alabama Power has not only tried to get the complaint thrown out but also proposed hiking the charge for customers with their own solar power by nearly 10 percent. A spokesperson for Alabama Power, Michael Sznajderman, says that the higher fee would help cover the cost of providing back-up service to customers who generate their own energy but remain connected to the grid.

The barriers built into Alabama’s energy market are just one example of the political, financial, and regulatory dynamics that can block low- and middle-income households from using rooftop solar power in the Southeast. But this tug-of-war between utility companies, regulators, and solar advocates isn’t just about money.

“It’s a real social justice issue,” says Greer Ryan, a renewable energy specialist at the Center for Biological Diversity, an Arizona-based environmental organization. “Anything that makes it less economical for people to go solar is going to be harmful for low- and median-income consumers,” she says. It’s like raising taxes on people who can least afford it — putting green energy out of reach for everyone but the wealthy.

Across the country, many low- and middle-income households (those earning close to the area median income) spend a big chunk of their paychecks on utility bills. In large metropolitan areas, the share of income that goes towards energy can be up to three times higher for low-income people than for their higher-income peers, a 2016 report by the American Council for an Energy-Efficient Economy and the Energy Efficiency for All Coalition found.

These problems are particularly acute in the Southeast, where poverty rates are high and so are electricity bills.

Alabamians, for instance, had the second-highest average monthly electric bill in the country in 2016, right behind South Carolina. A number of nearby states, such as Georgia and Tennessee, also had some of the country’s highest bills. The long, hot summers stoke demand for power-hungry air conditioning, which the Energy Information Administration identifies as a key driver of the costs.

Rooftop solar can help reduce those bills, especially as the price of installing systems continues to fall. “Solar prices have fallen so dramatically that many people — even in the industry — aren’t aware of how inexpensive it can be,” says Dan Kammen, professor of energy at the University of California, Berkeley and director of the university’s Renewable and Appropriate Energy Laboratory. The costs of installing and maintaining solar systems has plummeted from an average of $7.24 per DC watt for a residential-sized system in 2010 to just $2.80 last year, according to a study from the National Renewable Energy Laboratory.

So far, however, it’s largely the wealthy who have benefited the most from solar, Kammen says. One big reason is that lower-income households can’t always afford the upfront costs of installation. In Alabama, for instance, covering your roof in panels runs $14,000 on average, according to Ottenweller. That’s a tough sell in a state where 16 percent of the population lives in poverty.

Some states — mostly in the West and Northeast — are tackling that challenge. California already generates more power from the sun than any other state in the country and is pushing to make solar even more accessible. The state ordered three utilities to fund an effort to subsidize solar system installation for low-income households, the Single-Family Affordable Solar Homes program.

But other states are responding with pushback or inaction, especially in the Southeast. Many sunny states could do more to expand rooftop solar, finds a recent Center for Biological Diversity report. For instance, Tennessee and Alabama don’t require net metering, which allows solar customers to sell extra energy from their rooftop panels back to the grid. And Alabama doesn’t have clear policies on solar leasing, making it harder for customers to take advantage of a common arrangement in which they pay a monthly flat fee to lease equipment rather than buy it all upfront. Without these policies in place, Ryan from the Center for Biological Diversity says, rooftop solar remains out of reach for many. 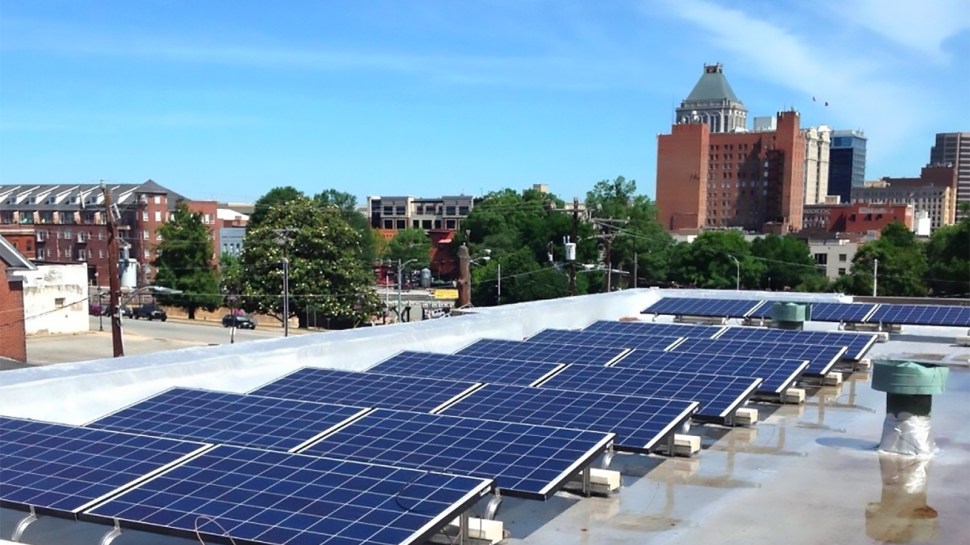 In Louisiana, a solar tax credit formerly offset the costs of rooftop installations. That helped PosiGen, a solar company marketing to low- and middle-income households, push down the price tag on solar panels they leased. The company also refurbishes households to improve their energy efficiency, and the combination of panels and home fixes allows most customers to save at least 50 percent on their annual energy costs, says Beth Galante, PosiGen’s vice president of business development and public relations.

But Louisiana’s budget woes led it to rescind the tax credit in 2016. PosiGen then raised its prices. The company put its expansion in the region on hold, says Galante. “Being a small company, we are focused on expanding into markets that support industry development,” she says. It’s now turning toward Connecticut and New Jersey, two states with solar-friendly financial incentives.

One of the biggest policy problems standing in the way of bringing solar to the masses is the way utilities are structured, Ryan says. Alabama is one of many states with a “regulated” energy market. In these states, utility companies have a monopoly over all stages of the electric market, from production to distribution as well as marketing and sales. If those utilities discourage residential solar, residents have few alternatives.

“These utilities have [almost] all the power in determining how electricity is generated and from where,” she says.

In North Carolina’s regulated market, for instance, companies other than the main utility aren’t allowed to sell the power they generate to homeowners. That policy sunk a recent effort by NC WARN, a North Carolina-based nonprofit that advocates for renewable energy. The organization purchased a set of solar panels and tried to sell the electricity generated to a local, predominantly African-American church in Greensboro. The state’s Supreme Court ruled last September that the arrangement violated the regulatory monopoly setup.

Many of those state-monopoly utility companies have launched industrial-scale solar farms and are adding more sun power to their energy mix. Southern Company, Alabama Power’s parent company, claims to be one of the largest owners of solar photovoltaic systems in the United States, with 27 different farms operating or under construction scattered across the country. Similarly, Oklahoma’s two main electricity providers recently made significant investments in large solar farms. 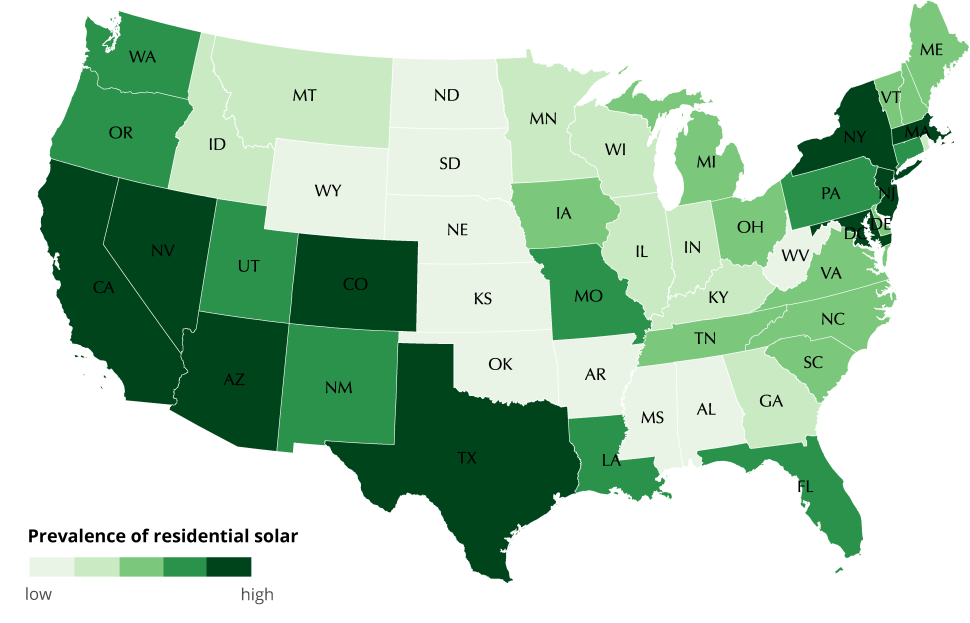 Amount of solar power generated in the residential sector by photovoltaic solar panels (in kWh) in 2016. Click to enlarge. Source: Energy Information Administration

But despite these efforts, renewable energy still makes up well under half of the energy mix in most states. In the Southeast in particular, states may not set standards that require utilities to derive a certain proportion of their energy from renewable sources. More rooftop solar would allow households to rely almost fully on green energy.

Besides, home solar systems bring other benefits. “Solar power owned directly by the people and neighborhoods who use it creates local jobs, reduces polluting emissions and can save individuals money,” Ryan notes in an email.

The opportunity is there: 42 percent of the country’s residential solar potential is located on the rooftops of low- and middle-income dwellings, finds a National Renewable Energy Laboratory study published earlier this year.

Utility companies argue that if they don’t charge customers a fee for generating their own solar power, the cost of maintaining a vast grid infrastructure will increasingly fall upon other customers, raising electricity prices for everybody. Few lower-income families currently use rooftop solar, but higher prices would saddle them with the bill for wealthy homeowners’ eco-consciousness, Alabama Power’s Sznajderman reasons.

This argument makes sense in theory, Ryan says, but almost no market in the United States has so much rooftop solar that this has become an issue.

Even if supporting policies are in place, other problems can get in the way. Most subsidies for panel installations only apply to those who own a home or condominium, leaving out anyone who can’t afford to buy a house.

Community solar projects — local solar facilities shared by a number of households — are one solution.

Housing authorities in New York City and Denver, among others, have established such arrangements for some public housing residents. In Minnesota, the Rural Renewable Energy Alliance worked with the Leech Lake Band of Ojibwe to install five sets of small-scale solar arrays around their reservation, using a state grant.

Back in Alabama, Ottenweller from SELC is waiting to see how the courts will rule on Alabama Power’s extra fees on solar. If the complaint is successful, then regulators must hold a public hearing, and could potentially withdraw the charge. “We hope they’ll take a hard look at this, and will realize that this has significant impact,” Ottenweller says.

Meanwhile, Jay, the former coal miner, is managing to keep his business afloat. He says he still loves the technology, but he’s shifted his focus to customers who can disconnect completely from the grid and avoid the extra fees from Alabama Power. He hopes the power company will eventually allow small-scale solar to take off in the state. But that shift takes time, he says. “We just have to go through the educational curve.”