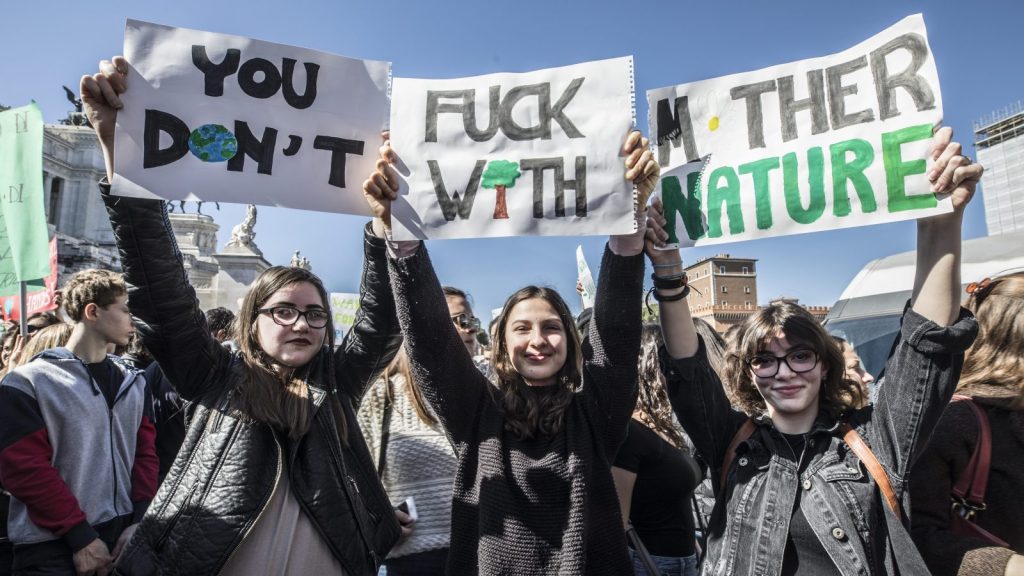 Young people in Germany, Argentina, the United States, and basically everywhere walked out of school last Friday as part of the Youth Climate Strike, voicing their frustration and anger that older generations have failed to act on climate change. And their raised voices included f-bombs — lots and lots of f-bombs.

Several photos of swear-filled signs went viral on Twitter. Students in Massachusetts held up a poster that said “Kiss my activist ass.” In London, one handlettered sign said “Why the actual f*** are we studying for a future we won’t even have!”

Such a good sign at #ClimateStrike in Wellington today! pic.twitter.com/FnqKxV8cwZ

Granted, many signs from the strike were on the tamer side. One gem came from a crowd-shy teen who braved a protest in Minnesota: “So bad [that] even introverts are here!”

To understand why teen activists are cursing about climate change — and why their foul language has captured public attention — it helps to have a picture of how norms around swear words have shifted. Youngsters clearly have a different understanding of what’s taboo.

“Profanity that’s drawn from sex, bodily functions, and religion is starting to be judged by the younger generations as being less offensive,” said Benjamin K. Bergen, a linguist and a professor of cognitive science at UC San Diego. “But at the same time, language that’s derogatory based on personal characteristics is more offensive.”

The cursing in these protest signs “actually seems awfully mild” for people under 18, said Bergen, author of What the F: What Swearing Reveals About Our Language, Our Brains and Ourselves. “It wouldn’t be surprising if they were using words that they didn’t find offensive but they knew could attract attention from older generations.”

Bergen regularly polls his first-year college students to rank their perceptions of what words are truly nasty. This year, they ranked the f-bomb as around the 20th most offensive word. “Shit” was way down at roughly 70th. All 10 of those considered the worst were slurs tied to race, gender, sexual preference, and other personal traits.

“Words are treated as profane on the basis of what a society is truly hung up about,” as linguist John McWhorter wrote in a column for Vox last year. “[W]hat truly concerns us, horrifies us, inspires a desire to shield people from the full force of the language, are words like the n-word, the f-word referring to homosexual men, and the c-word referring to, well, you know.”

So the language used by the young protesters may not be as scandalous as it appears on the surface. “They’re not using particularly offensive language, and they’re not using it to denigrate particular actors — even actors that they think have destroyed the planet,” Bergen said.

“Swearing is part of the spice of language, an emotional intensifier that when deployed with skill and humor, is staggeringly effective,” wrote Emma Byrne, author of Swearing is Good for You: The Amazing Science of Bad Language, in an email to Grist. Though it’s worth noting that in language, as in cooking, there is such a thing as too much spice.

In general, Bergen agreed with Byrne: “People who are already in the same camp, but aren’t motivated to act, may view these activists as being impassioned and truthful and might be slightly more likely to attend to the message or act on it.”

After all, research suggests that people who swear are perceived as more honest. The thinking is that the foul-mouthed, instead of tucking their emotions and thoughts away, impulsively toss them out in the open.

But profanity in activism is a double-edged sword, Bergen pointed out, because it creates an easy line of attack for those who oppose your message.

“It creates a target,” Bergen explained. “If the way that the message is conveyed is a violation of some norms, then it can become the story — instead of responding to the content, you respond to the way it’s delivered.”

Looking at the tweets criticizing the climate activist’s profane posters, you’ll find lines like “Future gender studies students displaying their intellect at such a young age” and “Boy, they look verrrrrry intelligent….not!”

There’s another straightforward explanation for this cursing about climate change: Young people are angry, and they want you to know it.

The under-18s, obviously, don’t get to vote. Skipping school is one of the few avenues they have toward exercising political clout, explained Hava Gordon, an associate professor of sociology at the University of Denver. “They have the power to disrupt the institutions that rely on them,” she said.

Young people could be using profanity to “underscore their political outrage,” said Gordon, who studies youth activism. “There’s something powerful about using that kind of anger, that punctuation, for the public.”

One sign from the Youth Climate Strike showed the Lorax flipping someone off. Yes, that’s the same creature who “speaks for the trees” in the famous Dr. Seuss book about environmental degradation.

This is the loudest and fastest protest march I’ve ever been on! Best signs too #climatestrike #climatemarch pic.twitter.com/0ydD2Qg3im

“Transforming that symbol of innocence into a symbol of political outrage is powerful,” Gordon said. “I think young people are saying, ‘If you’re breaking the social contract and you’re not acting like guardians, then we’re going to break the contract from our end and not act like children.’”

In recent years, adults have started to recognize young activists for taking things into their own hands. The Nobel committee awarded the 2014 peace prize to Malala Yousafzai, a 17-year-old at the time, for her work on gender and education. And this year’s class of Nobel nominees includes Greta Thunberg, the 16-year-old who inspired the Youth Climate Strike. Thunberg has been skipping school every Friday since last August to protest climate inaction outside the Swedish parliament building.

“It’s really fantastic that they’re being recognized for changing the world,” Gordon said, but it also shows how governments have neglected the needs of young people. “When we see new populations leading the charge, that’s a symptom of our failure to protect the public good.” 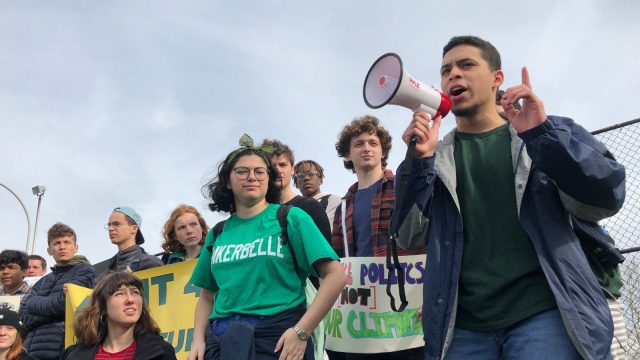 From better boilers to less plastic, these climate-striking kids are demanding their school shrink its carbon footprint
See all articles in this series