Voters in Arizona and Nevada faced an identical choice when they headed to the polls on Tuesday: Should their utility companies be required to get half of their energy from renewable sources by 2030?

The two electorates delivered different verdicts. Proposition 127 failed in Arizona amid what local news outlets are calling “the most expensive ballot fight” in the state’s history. Meanwhile, roughly 60 percent of voters supported Question 6 in Nevada, adopting the new renewables standard.

Both Arizona and Nevada states are among the sunniest in the country: The National Renewable Energy Laboratory ranked Nevada and Arizona first and second, respectively, among U.S. states in solar power potential in 2006. And solar is just one element of a renewable energy portfolio that can also include power from wind, hydroelectric, and geothermal sources. Prior to adopting the more ambitious standard, Nevada had mandated that utility companies, like NV Energy, provide 25 percent of their energy from renewables by 2025. Arizona’s still-current target for its utilities is to source just 15 percent over the same time horizon.

Forcing utility companies to get a minimum percentage of their energy from renewables is one of the simplest and most-effective ways to spur a transition away from fossil fuels, says Greer Ryan, a renewable energy specialist at the Center for Biodiversity, which endorsed both states’ measures. Many states don’t have renewable-energy standards for utilities at all. Arizona and Nevada are two of the 30 or so states that already had such mandates, though their goals coming into Tuesday night were hardly the nudge Ryan believes electric companies need.

“These states are nowhere near meeting the potential that they have,” she says.

As Nevada now moves closer to reaching its potential, Arizona is stalled. The reasons for the divergence have a lot to do with what happened on the ground in each state during the campaign season. While Nevada’s main electric company stayed neutral on the Silver State’s measure, Arizona’s electricity companies put up a big fight. Groups allied with the state’s major utility, Arizona Public Service Electric Company, spent more than $30 million to campaign against the proposal. 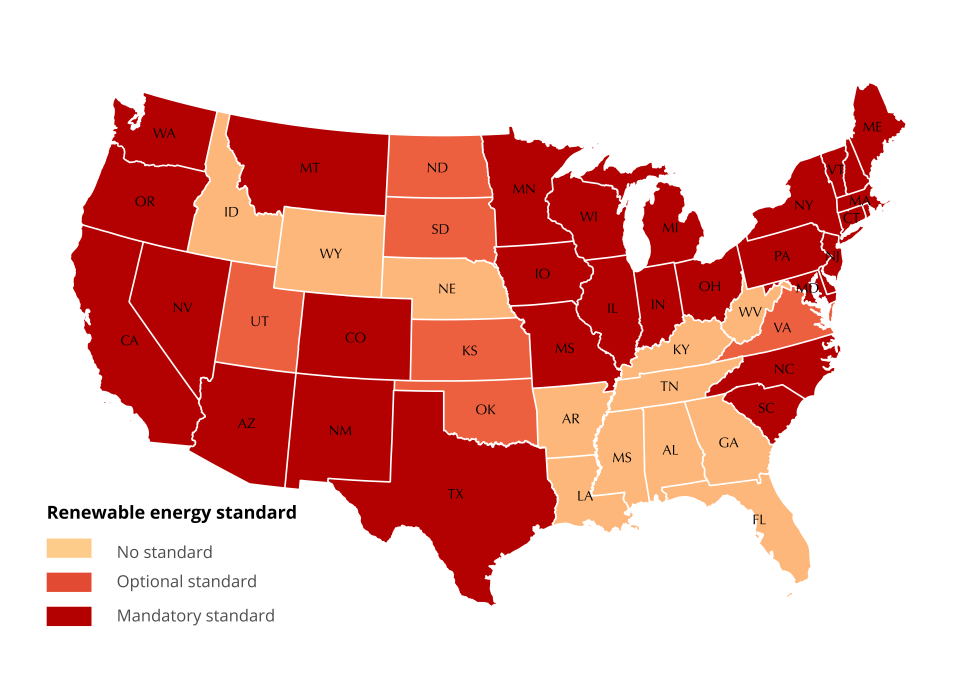 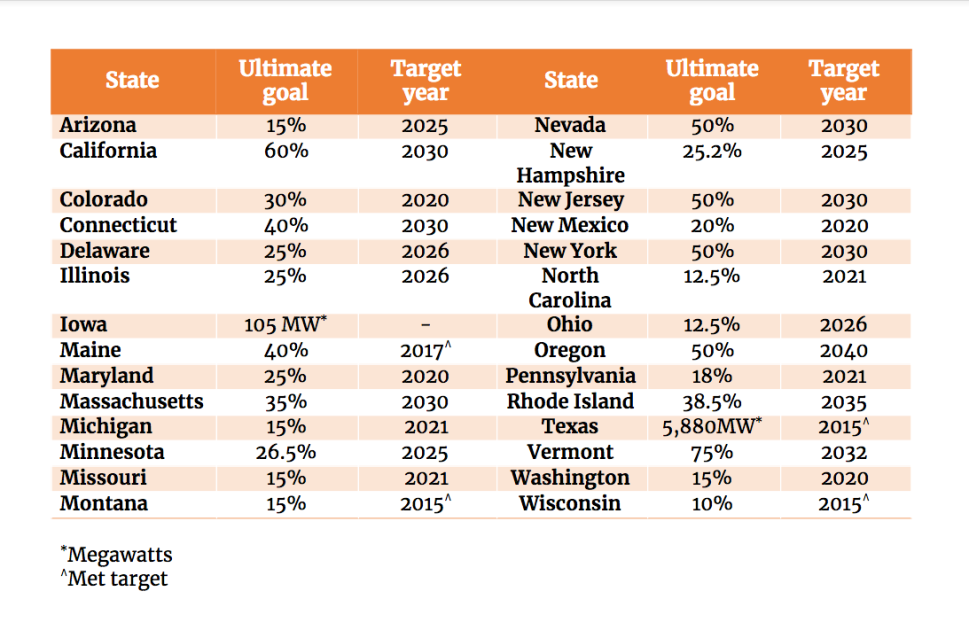 The alliance against Proposition 127 frequently cited the possibility that Arizonans could see increased energy costs if the measure passed. Matthew Benson, spokesperson for the utility-funded political action group Arizonans for Affordable Electricity, points to an analysis by Arizona State University, as well as several figures cited by industry, predicting that the expenses incurred by electric companies — to shut down coal power plants and build clean-energy infrastructure — would be passed on to ratepayers.

Those arguments swayed Janine Rodriguez, a legal assistant who lives in Phoenix. The campaign poster that made the biggest impression on her likened Arizona’s Proposition 127 to a similar measure that passed in California in 2015, which opponents claim has ramped up Californians’ electricity prices.

Rodriguez already pays about $540 a month for electricity to cool her 3,300-square-foot home during the summer months. It’s so expensive that she regularly allows the temperature inside her house to creep above 80 degrees.

Benson and other opponents of the measure also raised eyebrows at the fact that a group from outside of Arizona had raised the bulk of the nearly $24 million to get 127 on the ballot. NextGen America, an advocacy group funded by California billionaire Tom Steyer, fueled the ballot initiatives in both states.

“The initiative didn’t include input from Arizona families, or community leaders, or businesses,” Benson says, adding that it also didn’t include any protections for Arizona ratepayers.

Proponents of 127 countered those claims by arguing that the proposed shift toward more renewables would provide Arizonans a windfall of savings in the long term — $4 billion over the next two decades, according to a report by the Natural Resources Defense Council. Other nationwide studies have found that the nearly 30 states that have implemented renewable energy standards significantly drew down carbon emissions and netted a slew of public health and environmental benefits.

Jamison Foser, a political strategist and senior advisor at NextGen America, sums up the measure’s defeat as a victory for special interests over the environmental inclinations of Arizona voters. “Despite widespread support for renewable energy in the state,” he writes in an email. “Arizona’s Prop. 127 outcome is an unfortunate example of the power wielded by investor-owned utilities.” 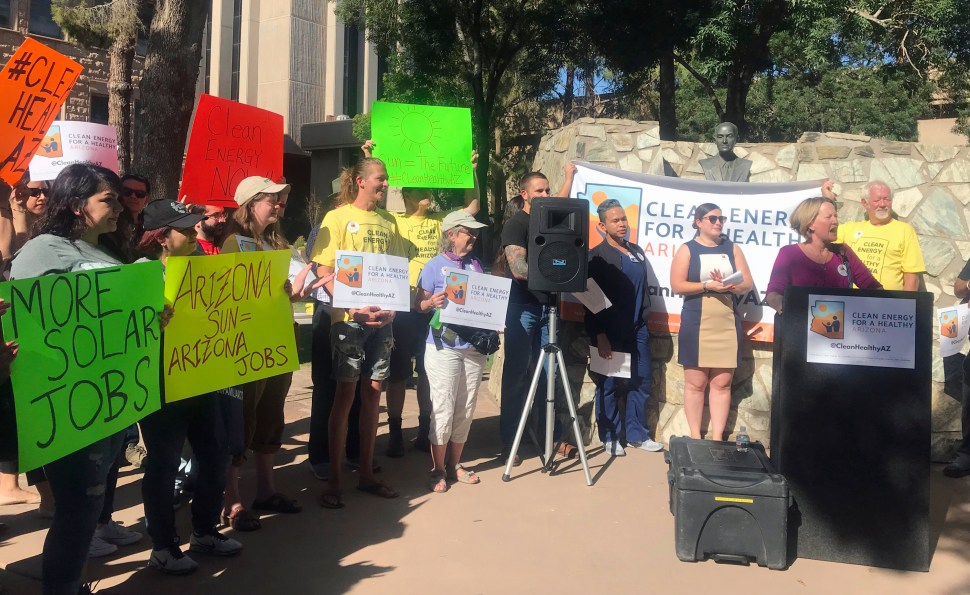 Kris Mayes, a former Arizona Corporation commissioner, speaks in support of the Clean Energy for a Healthy Arizona ballot initiative — a proposal requiring the use of more renewable energy in the state — at an August rally in Phoenix. Melissa Daniels / AP Photo

Meanwhile, in Nevada, the state’s main utility company, NV Energy, remained neutral on Question 6. Instead it focused its efforts on defeating another measure that would have eviscerated its monopoly status by requiring the state to create a free retail electricity market open to competitors.

While that certainly helped Question 6 pass, Andy Maggi notes that Nevada had previously shown an appetite for increased renewable energy standards. A bill to increase energy portfolios to 40 percent renewable by 2030 failed last year thanks to a last-minute veto by Governor Brian Sandoval. Having already come so close helped galvanize pro-environmental groups, Maggi says. So this time supporters drew up a constitutional amendment with a slightly more ambitious standard and took it directly to the voters.

Blanca Ortiz, a native of Nevada, joined the NextGen campaign after leaving her job as a personal trainer. She says enhanced renewable energy goals are a natural fit for the state. Solar power, in particular, makes perfect sense — and a reputation for clean energy could give a fresh identity to a state most often characterized by the late-night neon of Las Vegas casinos. “People here support it because we’ve lived under the sun for so long,” she says.

But Question 6 is just one step on Nevada’s path toward ratcheting up its renewable energy standards. Thanks to state law, voters will have to approve the measure again in 2020 before it is fully enacted. But Maggi hopes it will never come to that. He’s confident the recent win will serve as a mandate for the upcoming legislative session, which could put the standards into practice earlier through policy.

Ryan of the Center for Biodiversity hopes Arizona will eventually follow Nevada’s lead. “Arizona is in dire need of stronger renewable energy targets,” she writes in an email. “I don’t think this will be the last we see of this issue.”