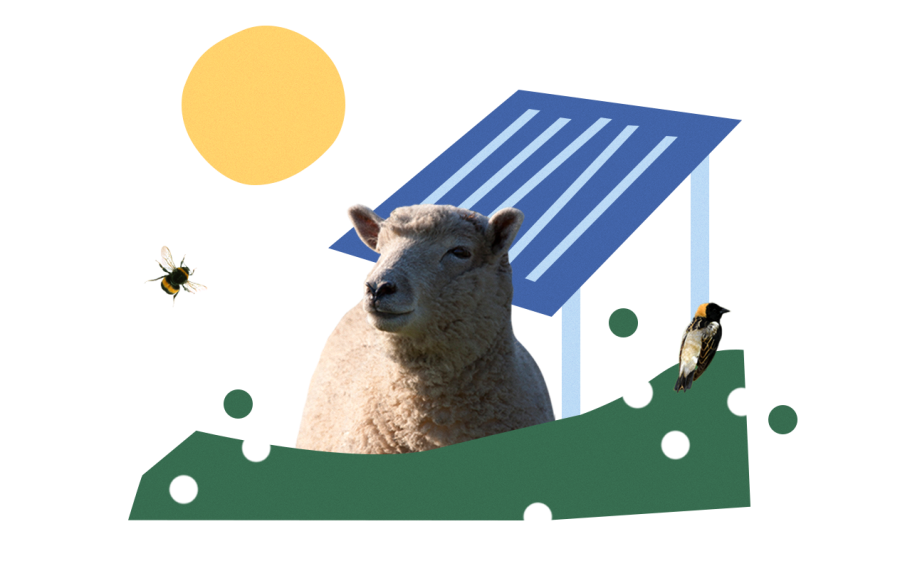 “There’s nothing more beautiful than standing out there with my sheep, overlooking the valley in a sea of blue panels.

When I’m on a solar site, I see bobolinks and quail and ground-nesting birds utilizing the shade of the panels. My sheep have all the protection and cover that they could want from the wind and the rain. They’re putting carbon back in the soil and eating a wider variety of plants.

We’re gonna have this solar site maintained by animals as if it were a pasture, and that’s just beautiful.”

Caleb Scott’s crew struggled to mow around hundreds of steel posts, their machines burning gas and spitting out rocks dangerously close to fragile, waist-high solar panels. At that moment, he regretted taking the commercial solar landscaping job — the work was tedious and time consuming. But Scott was more than a landscaper. He came from seven generations of farmers in the Finger Lakes region of New York and his true passion was animal husbandry. He thought to himself, “We’re out here mowing, and my sheep would do such a better job.”

Farmers like Scott have watched as solar, a much-needed but space-intensive technology, gobbles up arable land in rural areas. In his home state, 44 percent of utility-scale solar has already been developed on agricultural land, and 84 percent of future possible sites are agricultural as well. The newly released IPPC report stresses that we have a rapidly closing window of time to curb fossil fuel emissions to avoid the worst impacts of climate change — and that one of those impacts will be the destabilization of our food systems. In other words, we need clean energy yesterday, and we also need sustainable, resilient agriculture.

City planners and clean energy wonks have risen to the challenge of space efficiency with strategies like solar rooftops, carports, and even floating arrays. But Scott sees an opportunity for solar and farming to share space, rather than compete. His solution: grazing sheep under solar panels.

In 2012, Scott was one of the first in his field to approach a solar developer with the idea of solar grazing. “I saw this opportunity for farmers across our country and I went, ‘This is a game changer,’” he says. 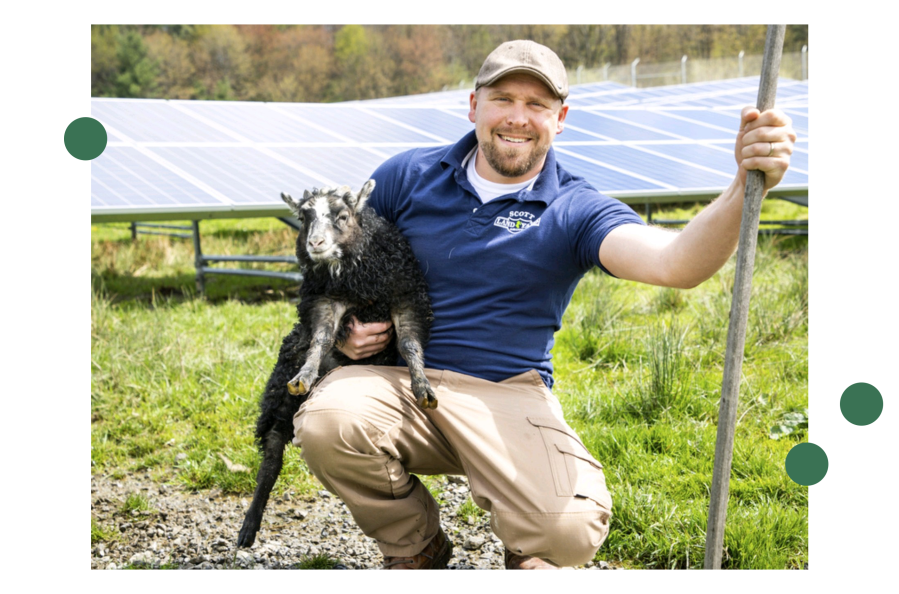 ​Solar grazing is part of the growing field of agrivoltaics, which is the co-location of livestock or crop production with solar arrays. Sheep are a particularly good match because they perform a job that the site already needs, and they have the right size and temperament to be around panels. According to an ongoing Cornell University study, using sheep in place of fossil fuel-burning mowers reduces greenhouse gas emissions on site (although transporting flocks from site to site can have a footprint of its own). The report also notes that using solar fields for grazing can reduce the pressure to convert forests or other areas to new pastureland.

Sheep also supply manure, which contributes to soil fertility and increased plant matter, and the potential for more carbon to be drawn from the atmosphere and stored in roots. Pasture managed by grazing animals can provide habitat for pollinators, birds, and a greater diversity of plants. And grazing offers a less polluting, less resource-intensive model than growing corn and soy for feed. 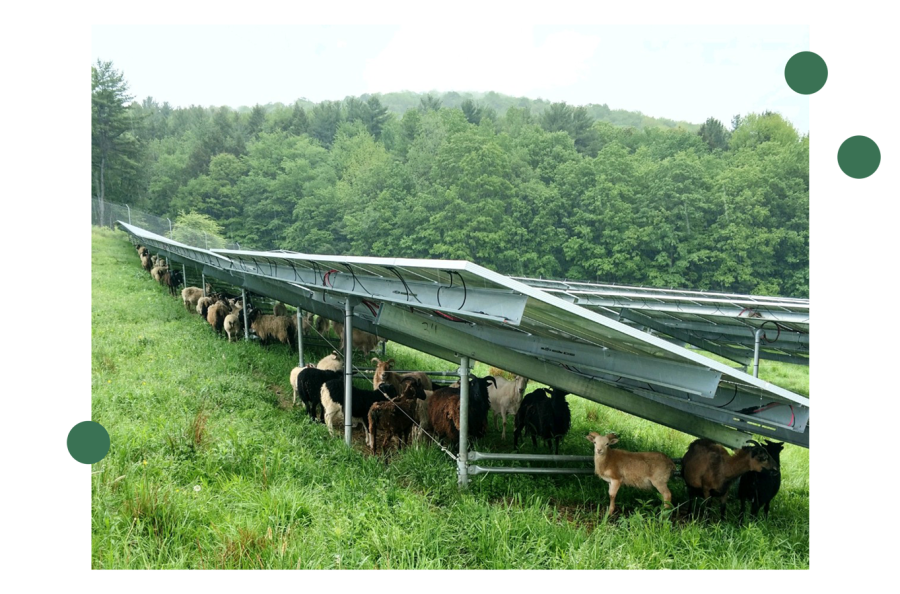 It took three years for Scott to negotiate his first solar-grazing contract, which was finalized in 2015. Although the model has gained popularity since then, farmers still face barriers to entry, such as obtaining the insurance solar developers require and managing the costs of transporting sheep. In 2018, Scott teamed up with fellow sheep farmer Lexie Hain to found the American Solar Grazing Association, the first one-stop shop for solar-grazing resources like contract templates and a mapping tool to connect farmers with solar companies. And he is currently in the process of developing a franchise business model that will allow solar grazers to share insurance and other resources.

Today, there are 470 ASGA members across the country, and the number of acres used for solar grazing has ballooned. In New York alone an estimated 79 acres in 2018 jumped to 900 in 2020. Scott’s own company, United Agrivoltaics, now oversees 600 sheep across Virginia, Maryland, and New York. 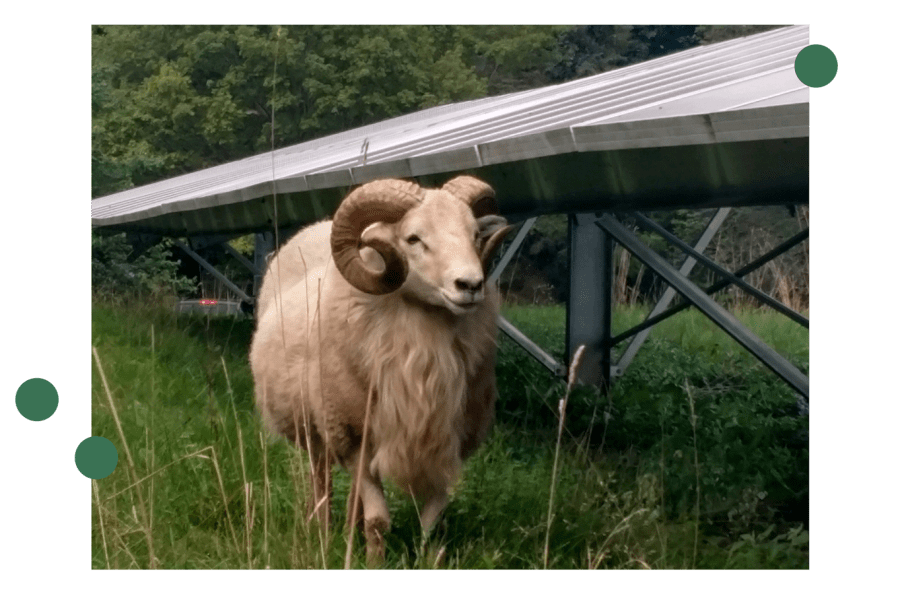 While solar-raised meat and wool have not yet hit mainstream markets, farmers like Scott sell their products in local grocery stores and farmers markets, and companies like Sun Raised Foods sell online. Scott remains optimistic that the practice will continue to take hold around the country. “There’s so many beautiful and synergistic benefits to grazing sheep on solar,” he says. “You think to yourself, this is the future of farming.”

We on the Fix team are looking to our next digital exploration. It’s going to be all about the outdoors — everything from backyard gardens to back-alley wildlife to backcountry vistas — and the ways we access it, the inequitable barriers to that access, and how outdoor experiences can catalyze our trajectories as climate and justice advocates. We would love to hear from you! Do you have a strong memory of a place, critter, phenomenon, or encounter in nature that has informed the way you engage with environmental issues?

We’ve put together a couple of examples from our Fix colleagues to give you some inspo:

When I was a kid [growing up in Colorado] and we would drive to the mall, my mom would always ask if we wanted to go “the antelope way” — which meant down Highway 83 past fields of wild pronghorn antelope. It was the BEST. They used to be all over the prairie near my childhood home, but crappy housing developments have completely replaced them. I haven’t seen an antelope in almost 20 years, but just knowing they’re being preserved elsewhere in the state gives me tremendous peace of mind. I don’t always feel like there is much I can do to make a difference back home, so I try to be involved in my community here and do what I can from afar.

I didn’t grow up near the ocean. I first saw coral reefs in a book. They were so beautiful and otherworldly, I knew I had to see them in person someday. I remember learning about coral bleaching and being horrified that my dream of swimming in the Great Barrier Reef could be short-lived. In high school I jumped at the chance to go scuba diving in Florida on a service trip. Fish swam right up to me, and I saw an eel from like 10 feet away. I got to harvest and plant coral with an organization working on coral reef restoration. I’d always talked about nature and preserving it, but getting to see the environment we are destroying up close left an impression. I switched career paths when I learned there was more I could be doing.

On March 23, join us for Fix Live: Faces of a better climate future. To celebrate the release of the seventh annual Grist 50 list (coming out on March 22!), we’re hosting a panel with a few past honorees to discuss this moment in the climate crisis, how their work has been adapting and growing since being named to the list, and what’s coming next for climate and justice solutions. Register here.

Solar panels can share space with more than just sheep. Floating solar (or “floatovoltaics”) is the placement of solar arrays on reservoirs, wastewater plants, or other bodies of water. Here’s a view of Sirindhorn Dam hydro-solar farm in eastern Thailand — the largest installation of its kind. The hybrid facility produces solar energy from around 145,000 floating panels during the day and switches to hydro generation at night. 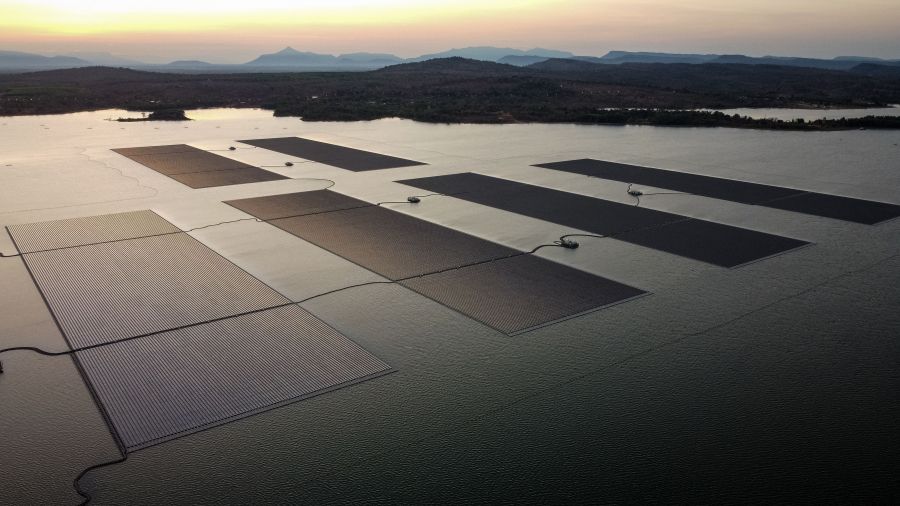 The CSA has roots in Black history