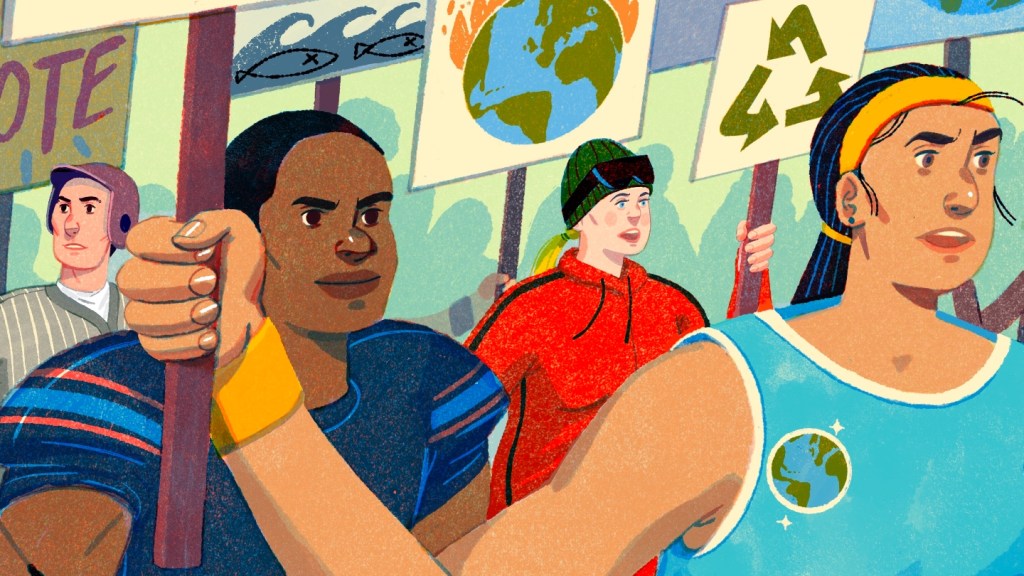 From her home in Boulder, Colorado, world champion climber Sasha DiGiulian has been watching smoke from the East Troublesome fire darken the sky — yet another reminder of the climate crisis. With 40 record-shattering climbs under her belt, DiGiulian has traveled as far as Madagascar, becoming the first woman to ascend the massive granite face of Mora Mora. But since 2015, she has also been travelling to Washington, D.C., with climbing advocacy groups like American Alpine Club to lobby Congress for conservation and clean energy legislation.

DiGiulian is part of a growing community of climbers, trail runners, skiers, and other athletes who know that global warming spells doom for their most beloved outdoor sports. In recent years, Australian Open tennis players have fainted, their shoes melting, due to extreme heat and wildfire smoke. Warmer winters are melting the ice and snow essential to sports like snowboarding and hockey. These athletes are witnessing the consequences of a changing climate firsthand — and doing what they can to warn the rest of the world.

“I’ve lost friends due to mountaineering accidents,” DiGiulian says. “Avalanches have always existed, but the warming temperatures and changing weather patterns cause less stable snowpack, which triggers more and more of these really tragic incidents.”

Athlete-environmentalists aren’t exactly new. But their calls for action are getting louder and more urgent, especially as wildfires, hurricanes, and other catastrophes make the climate crisis clearer — and as player-led protests, like the NBA’s recent strikes against racial injustice, blur the lines between entertainment and activism.

These climate-concerned athletes are taking their message to Instagram with campaigns like #CrushItForClimate, documenting themselves running their fastest times and skiing their steepest slopes to inspire followers to make an extra effort for the planet. And some are taking the issue directly to world leaders: Chloe Kim, the youngest woman to earn an Olympic gold medal in snowboarding, testified at the 2019 United Nations Youth Climate Summit about the impact of global warming on winter sports.

“Athletes are catalysts of social change,” says GreenSportsBlog founder Lew Blaustein. “Look at Jackie Robinson breaking the color barrier in 1947, or Muhammad Ali speaking out on the Vietnam War, or Billie Jean King’s impact on women’s rights. In more recent times, we have Colin Kaepernick speaking up about police brutality. But we don’t yet have the Jackie Robinsons and Colin Kaepernicks of climate.”

According to a 2015 Gallup poll, nearly one in six Americans identify as sports fans. If athletes can fire up that portion of the population about climate change, then maybe the sports industry — and even Congress — will be forced to make serious strides on clean energy goals and land conservation.

To help make that happen, Blaustein launched the nonprofit EcoAthletes in April. Like Protect Our Winters, a coalition of winter sports stars founded by snowboarder Jeremy Jones, Blaustein’s organization is training athletes to speak publicly about environmental issues. His aim is to bring more mainstream athletes from sports like football and soccer into the climate fight to capitalize on their massive platforms.

The hope is that athletes can connect and inspire one another, pooling their collective platforms to keep the climate conversation front and center in the sports world.

Blaustein spent 15 years advising on and writing about sustainability in sports — his green-business consulting firm helped major events go carbon neutral, including the Atlantic Cup sailing competition and ESPN’s Women + Sports Summit. But he was frustrated by the industry’s silence on global warming, despite its massive contributions to the crisis with emissions from traveling and operating large stadiums. Studies estimate that the global sports industry’s carbon footprint is about the size of Spain’s.

“To its credit, the industry has been rapidly greening since around 2003, with on-site solar and LEED-certified buildings and things like that,” Blaustein says. “But it rarely addresses the ‘why.’ Climate change is like the thing that cannot be named in the sports world. That lack of conversation is not going to move the needle.”

What can move the needle, however, are athletes. But instead of tapping one iconic figure to lead the charge, organizers like Blaustein are hoping to build a whole movement of engaged sports figures. Milwaukee Brewers pitcher Brent Suter, for example, is a member of the EcoAthletes’ advisory board and cofounded the Sidelining Carbon initiative to help teams calculate and offset emissions associated with their travel. He has appeared in videos advocating for carbon-pricing policies like the proposed Energy Innovation and Carbon Dividend Act.*

Garry Gilliam, former defensive tackle for the Seattle Seahawks, joined EcoAthletes to learn how to maximize his own impact. He recently launched a sustainable real estate firm with big plans to turn abandoned buildings into zero-emissions, mixed-use developments. And throughout his football career, he has tried to educate his teammates about the merits of going vegan and transitioning to renewable energy. “I remember players and coaches looking at me like, ‘Why do you even care? We’re just here to play football,’” Gilliam says.

The hope is that, through monthly Zoom meetings and online workshops, athletes like him can connect and inspire one another, pooling their collective platforms to keep the climate conversation front and center in the sports world.

“It’s pretty dope to hop on our community calls and see people from Australia and China and from all around the world,” Gilliam says. “They’re so far ahead of me. They’re doing legit legislative work.”

With more than 1 million followers across Twitter, Instagram, YouTube and Facebook, DiGuilian already has a huge platform, which she often uses to endorse policies like the Great American Outdoors Act, a recently passed law that will double federal funding for land conservation and maintenance. This fall, she directed her fans to MakeADamnPlan.org, Protect Our Winter’s online voter tool.

“In order to continue to be able to access places like Joshua Tree or Yosemite, we need to be willing to speak out for the future of the outdoors,” DiGuilian wrote in an Instagram post in October. “The places we love to climb and find our solace are under threat from the effects of climate change and fossil-fuel-industry-backed legislation. The only way to protect them is to vote for politicians who will champion, or at least vote for, policies that will slow global warming and protect public lands.”

DiGiulian has received her fair share of criticism. “I still get comments on my feed like, ‘Stick to climbing, that’s what you’re good at,’” she says. “Or, ‘Climb under a rock, you don’t deserve to be heard.’”

According to Gilliam, it’s exactly that criticism that has held other athletes back from speaking their minds. But he’s been encouraged by Colin Kaepernick and other players who, despite the pushback they’ve shouldered, haven’t backed down.

“Athletes are conditioned to think that we can’t use our platforms to express our beliefs, but that’s not the case,” he says. “We are members of this society and are entitled to influence it. If more players are willing to take a stand, and leagues encourage it, then others will realize they don’t just have to ‘shut up and dribble.’” (That’s a reference to the now infamous words of Fox News anchor Laura Ingraham, who blasted LeBron James for criticizing President Trump in a 2018 interview.)

For DiGiulian, the positive feedback far outweighs the negative. And seeing her corporate sponsors, like Adidas, shift to more sustainable practices makes her think that athletes like her are already making a difference.

“I have the privilege to work and thrive within my sport, in the natural places that I love to be,” DiGiulian says. “And as a part of that, I have a responsibility to be using my platform to speak for my values.”