By midday Thursday, the sky over Estes Park, Colorado, had grown dark as night. Residents heeded emergency evacuation orders, packing up their cars as a flurry of ash fell. They saw that same apocalyptic red-orange glow that haunted northern California last month. Soon, they would be lined up in traffic heading east on highway 36, unsure if their small resort town at the base of Rocky Mountain National Park would ever be the same.

It is dark as night and the roads are GRID LOCKED. The roads down the mountain must be creeping. pic.twitter.com/DGtHqQZaBk

The evacuation order came as the East Troublesome Fire, which ignited in the mountains last week about 60 miles west, exploded overnight, growing from 30,000 acres Wednesday afternoon to 125,000 on Thursday morning. By the end of Thursday, the fire’s footprint stretched 170,000 acres, making it the second largest fire on record in Colorado. The largest was the recent Cameron Peak fire, which is actually still burning just 10 miles north of the East Troublesome and is 57 percent contained. Officials have warned that the two fires could potentially merge. 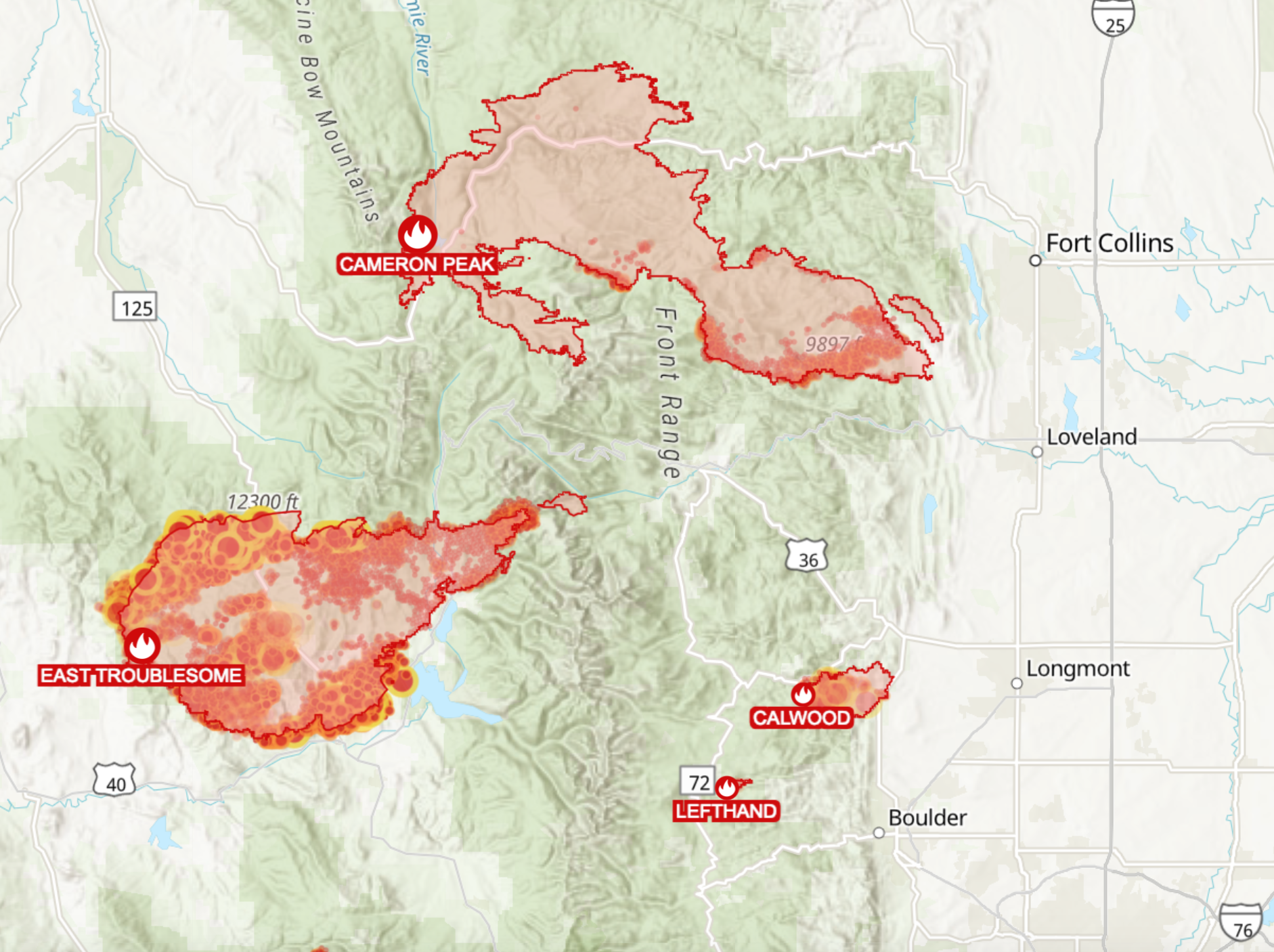 To the west of the Rocky Mountains, the town of Grand Lake had already been evacuated on Wednesday. An elderly couple that took shelter in an underground bunker instead of evacuating is now believed to have died, but there have been no confirmed deaths or injuries yet. However, Grand County Sheriff Brett Schroetlin said that there has been “lots of structure loss.” Colorado’s governor, Jared Polis, has activated the National Guard to help with search and rescue. He also called for more ambitious climate action during a press briefing.

The fire’s rapid growth was fueled by 60 mph winds that coaxed the flames east into the Rockies, where they continued to tear through lodgepole pine forests, which had been weakened by drought and an infestation of bark beetles. Colorado is in the middle of an abnormally dry season, with 77 percent of the state experiencing “extreme drought” and 21 percent experiencing the most severe category of “exceptional drought,” including parts of Rocky Mountain National Park. Climate change is lengthening the dry season, and the entire Southwest is in the middle of the first climate change-induced megadrought — a severe drought that lasts multiple decades — in 1,200 years, according to a study published in April. Western Colorado has already warmed more than 2 degrees C (3.6 degrees F) above pre-industrial levels, which is double the global average.

This devastating fire season is evidence that climate change is already here. That doesn’t mean there’s nothing places like Colorado or California can do to reduce fire risk in the coming years. Better forest management, controlled burns, and smarter land use management can all help — and, of course, so can efforts to prevent greenhouse gases from accumulating in the atmosphere.

Warm, dry, and windy weather conducive to fire is expected to continue in northern Colorado this afternoon, but officials are hoping that snow forecast for Sunday could help contain the blazes.

*Correction: An earlier version of this post incorrectly identified the town of Grand Lake.