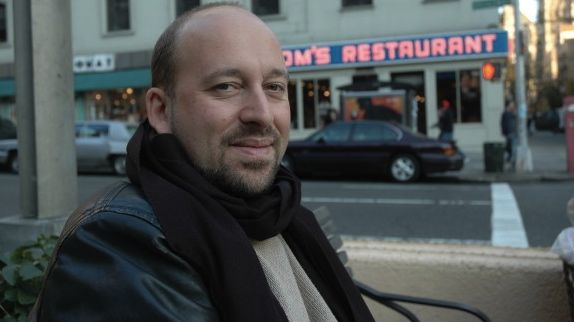 When the legendary James Hansen announced his retirement last year as director of NASA’s Goddard Institute for Space Studies (GISS) — a leading climate research group — it was because, after a half-dozen citations and arrests from climate and Keystone XL protests, the 72-year-old could tell that the government organization was tiring of his tricks. But this left anyone wonkish enough to be paying attention wondering: Who was bold enough to replace him?

Earlier this month, NASA came out with the answer: Gavin Schmidt, an imperturbable champion of science. While his name isn’t as known as his predecessor’s — at least, not yet — he’s still pulled some pretty noteworthy stunts. He’s unafraid to talk climate change with the most obnoxious of skeptics or deniers, and is known for steadfastly sticking to the data amidst flurries of spin. Schmidt’s also got more than 120 scientific publications to his name, was a founding member of the influential RealClimate blog, and has talked climate science in a digestible way on everything from the TED circuit to The Daily Show.

But does he have it in him to be the next Hansen? No — because Schmidt, 46, isn’t looking to fill anyone’s shoes but his own. And, based on a recent interview with Grist, we think he’s already got a pretty good pair on him, too. While he might not be out there storming the streets, Schmidt’s combo of scientific cred and wry ‘tude makes us wonder: Did NASA just replace one rabble-rouser with another? Here’s why we’re keeping an eye on the climate hawk:

“My communication focus has really been on increasing the level of public discourse so that when we argue, we argue about real things,” he says. He’s known for his efforts to debunk papers and articles that don’t get the story right — be it in the comments, on RealClimate, or on Twitter. In 2011 the American Geophysical Union (AGU) gave him their Climate Communication Prize, noting, “He has transformed the climate science dialogue on the web and thereby elevated communication of this science,” colleagues said.

He’s got a wry sense of humor.

Watch Schmidt wax poetic about the process that is science — and talking-while-eating etiquette — in this great animated conversation with the Perrin Ireland of the Natural Resources Defense Council:

He understands that the future is now.

At this year’s headline TED conference, Schmidt smartly laid out what climate models are all about: not seeing into the future, but making the best-informed decisions that we can now. “The future is unknown, the future is uncertain, and there are choices,” he said in his talk. “We can do some more work to mitigate the emissions of carbon dioxide into the atmosphere … or we can just leave it to fate and continue on with a business-as-usual type of attitude.” He continued, “The models are skillful, but what we do with the information from those models is totally up to you.”

Where most people see complexity, he sees opportunity.

When it comes to modeling climate we may crave simple answers, but “some things are kind of irredeemably complex, and you just have to embrace that,” Schmidt says. “But if you’re talking to real people, if you’re talking to policy makers, that’s actually a good place to start … Policy makers know that the issues are connected — air pollution is connected to climate change, urban living is connected, building codes are connected. I think when scientists try to spin too simple of a story, people don’t connect because they see that there are complications.”

How many climate modelers have gotten profiled in The New York Times while sipping coffee on an NYC park bench and making deep statements like, “The climate is like the city”? Schmidt sets the standard.

He juggles — and once broke an arm while playing unicycle hockey.

Behind the hard-ass front, he really just wants to connect.

He may have a reputation for being brash, but part of what got him out of his start in math theory and into climate science was that he figured out climate was something people actually cared about. “Instead of telling somebody at a party that you’re a mathematician and having them kind of immediately go off and talk to somebody else,” he said that when he started telling people he works in climate change he felt more of a spark. “People have a kind of visceral connection to climate … people are really, really interested.”