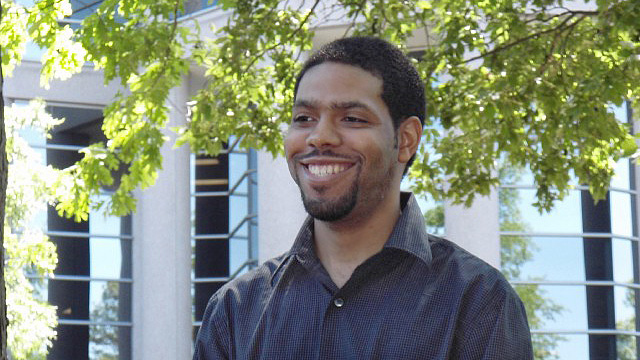 While you’re watching the State of the Union tonight, when the camera spotlights First Lady Michelle Obama, you’ll see among her entourage one of the nation’s future leaders on climate change. That would be 30-year-old Tyrone Davis of Winston-Salem, N.C., a third-year law student at Elon University.

In the summer of 2010, working as a Climate Corps fellow for the Environmental Defense Fund, Davis completed an energy efficiency plan for four large buildings at the historically black Elizabeth City State University in North Carolina. He suggested improvements that would deliver more than $30,000 in savings each year — and spare the climate from 190 tons of CO2 emissions annually. The school liked the proposal so much it hired him to write a campus-wide sustainability plan.

I caught up with Davis by phone and learned that, while he’s legally blind, he has no problem spotting places where we can up our game to better address the climate threat.

Q. I’m told that when you got the call that you would be joining the First Lady for the State of the Union, you were meeting with business leaders in Hong Kong.

A. The law school [at Elon University] is doing a joint program with the business school. They sent us to China to look at some of the business and legal problems that some companies face doing business in China. We spent some time in Shanghai and the rest of the time in Hong Kong talking to executives and management officials of these corporations, and asking them about what’s most tough about doing business in China.

Q. I imagine that one of the answers about what’s tough was dealing with all the smog and health-related impacts on their workers. Did that come up?

A. Yeah. In some of my own research, I looked at the history of China’s development over the past 40 to 50 years and saw that they industrialized their nation really fast, as their main priority has been to develop economically, and in doing so they forgot about the environment a little bit. China is, however, beginning to make a turn for the better. One of [President Obama’s] goals is to get nations around the world to address climate change, and I believe China is starting to come around on this.

Q. Your academic background is in law, political science, and public administration. How’d you get involved in climate change?

A. My time at North Carolina State University. I originally went there to pursue a nuclear engineering degree, and during that time, I worked with some grad students who were doing research on waste management. While sitting in on some of their meetings, it really opened up my eyes [to] the impacts that energy production has on the environment. Having the opportunity to learn about things like radioactivity made me more aware of the environment and led me on the path I’m on now. At N.C. State, I took a class in environmental policy where we talked about regulatory systems like cap-and-trade, and that sort of kept me on the path.

After grad school, a career services counselor knew that I was interested in environmental issues and emailed me about a job to work with the Upper Coastal Plain Council of Governments, [a regional planning organization in North Carolina]. At the time, they were trying to help small, local communities apply for grant money under the stimulus plan so they could implement energy efficiency projects in their government buildings. A lot of these communities had energy audits done. So me and another colleague looked at the audits and translated them into plans and packaged them together with other community plans, and then helped them go through the process of applying for the stimulus funds. In a few cases, [we] visited government facilities and looked at where they could implement energy efficiency measures. It was a great experience — really about connecting with communities, because a lot of them didn’t have an office or position dedicated to doing this.

A. A lot of that involved me counting lightbulbs and seeing how much energy [the university] was using, and then showing them how much they could save. Another aspect was connecting the university with local people who deal with heating and AC systems and providing cost estimates for upgrading their equipment. So a lot of my job was networking with people and then analyzing the costs and possible savings, then creating reports with our recommendations based on that.

Q. How have you been able to do all of this without full sight?

A. Well, I’m not completely blind. I have some sight. My central vision is blurred so I have to use my peripheral vision. I was able to do things like count lightbulbs by myself, but if I needed help, say, reading wattage rates on a microwave, I’d ask a facility manager to help me do that. That’s where the networking with engineers is very, helpful because they were able to give me information I needed to put in my report. I didn’t have to go into HVAC labs and figure it all out myself.

A. If more communities would implement better public transit as a way to slow down global climate change, that would be quite beneficial for people with visual disabilities as well. In some communities, the transportation systems can be really slow. If I need to get somewhere that’s 15 minutes away by car, it might take me well over an hour.