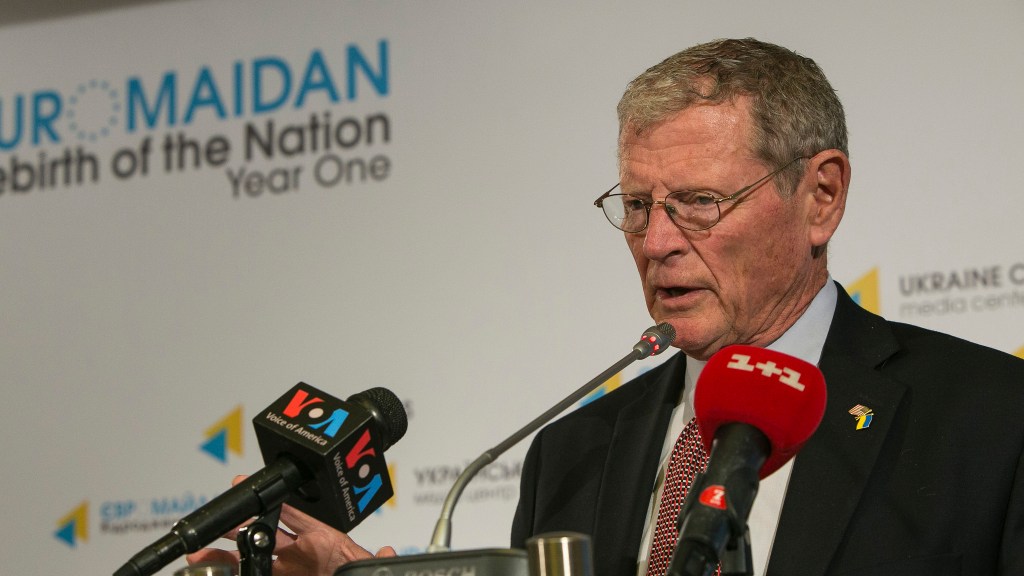 Sen. James Inhofe (R-Okla.), one of the world’s most vociferous climate skeptics, is practically giddy these days. He’s argued since 2003 that global warming is a massive “hoax” being played on the American people, and now he believes he’s got more backing than ever before for his claim, from “Climategate” emails to errors in the latest report from the Intergovernmental Panel on Climate Change to the recent blizzards in Washington, D.C. (He gleefully hyped an igloo built by his grandkids as “Al Gore’s new home.”)

Inhofe didn’t get as much attention as he might have hoped for during his December visit to Copenhagen to denounce climate treaty negotiations, but he tried to reclaim the stage this week during a Senate hearing that addressed EPA’s efforts to regulate greenhouse gases. He argued that “the science of the IPCC … has been totally discredited” and unveiled an 84-page report titled ‘Consensus’ Exposed: The CRU Controversy. “It’s a report on the scandal that has become known as Climategate,” he explained. “Many of [the world’s leading climate] scientists have manipulated data to fit preconceived conclusions … They cooked the science.” Inhofe’s report even suggested that some climate scientists “may have violated federal laws.” (Watch his hearing statement below.)

I spoke with Inhofe by phone right after the hearing about who’s perpetrating the climate hoax, who’s being hoodwinked by it, and why he doesn’t believe clean energy creates jobs.

Q. You got your snow boots on?

Q. You reasserted in today’s hearing your belief that global warming is a hoax. Can you clarify specifically who is perpetrating the hoax? Who are the dupers and who are the victims of the climate hoax?

A. Who are the victims? It would be the United States. It would be the economy, what would happen to this country according to MIT* and others who have made analyses as to the economic destruction that would come with something like cap-and-trade or [regulating greenhouse-gas emissions] through the Clean Air Act.

Q. Who are the perpetrators of the hoax?

A. That’s the United Nations and the IPCC, clearly.

Q. Major energy companies have said they believe the scientific consensus on climate change. ExxonMobil said the appropriate debate isn’t on whether the climate is changing, but what we should do about it. NASA, NOAA, the Pentagon, the Pope, evangelical leaders, top executives in all industries, and governments all over the world including China and India–they’ve all acknowledged climate change. Do you believe that all of these entities have been scammed by the U.N. and a handful of scientists in the IPCC?

A. What you’ve just said is not true. There’s not unanimity at all even though you want to believe it.

NOAA and NASA and all these organizations, these people are all tied in to the IPCC. There are a lot of companies, oil companies and all that, who would like to have cap-and-trade. That’s where they can make money.

A. They stand to benefit [from] government grants and private sector grants [from places] like the Heinz Foundation.

We have scientists who are really sincere, and they’ve watched what’s going on and they have a hard time believing it. Those are the ones who started going to me probably seven or eight years ago, saying they’re cooking the science on this, someone’s got to say it, and I said it. And then more of them came. I listed them on my website. I’ve been very clear all along who the perpetrators were, what the motives were.

Q. So you believe that the U.N. and the scientists on the IPCC are perpetrating the hoax in order to get grant money?

A. No, no, no. We’ve already covered this, Amanda. You guys always ask the same question over and over again looking for a different answer. What is it you want that I didn’t already tell you?

Q. I’m trying to clarify the motivation behind the hoax. Why would these scientists want to deceive the global public?

A. It’s very clear that when you have the U.N. behind it, and you have all the Hollywood people moving in, you have the Heinz Foundation, that’s John Kerry’s wife — a lot of very wealthy people.

Many of [the scientists] know that if they were recipients of grants in the past, that could well be cut off. Or if they haven’t had them, they would want them. The complaints I had brought to me were from scientists who said that many scientists had been intimidated into saying things that weren’t true because of that leverage that has been used.

Q. So you believe the scientists and the U.N. are in it for the money?

A. Well, that enters into it, yes.

Q. The Pentagon has identified climate change as one of the biggest threats to our national security. Why shouldn’t we trust the American military to judge security threats?

A. The Pentagon does not say that. Barbara Boxer wants to believe that the Pentagon says that. And also you mentioned evangelicals. Not true at all. Some of the very liberal churches have taken a position. Most of them have either not taken a position or have said this thing is not real and we should not be allowing government to do this.

The overriding factor is that even if we did all of this unilaterally, it’s not going to reduce CO2.

Q. The Pentagon just produced the Quadrennial Defense Review, which said climate change will accelerate conflict around the globe.

A. Keep in mind that the Quadrennial Review and all that comes out of the White House. That’s part of the administration. In the Pentagon, they’re good soldiers–they’ll do pretty much what will ingratiate the commander in chief. That’s what they’re supposed to do.

Q. More than 280 evangelical leaders, including Rick Warren, signed the Evangelical Climate Initiative supporting action on this issue. Are these leaders also duped? Are they part of the hoax?

A. If you can’t find 300 evangelical or religious leaders, or people who identify themselves as religious leaders, that can pursue almost anything, then you’re not really doing your job. It’s kind of funny because I don’t recall any of the people that I run into who are evangelical leaders who really buy in to this thing. But that’s fine, there are some who do, I’m sure.

Q. Do you believe that investing in clean energy is going to create jobs in the U.S.?

A. Oh, absolutely not.

Q. Oklahoma has huge wind resources. My understanding is that wind and natural gas are among the biggest and fastest-growing sectors of your state’s economy.

Q. So the wind industry is not creating jobs in your state?

A. Yeah, it is. A few jobs. We always look at net jobs, and we have had hearings on this and shown very clearly that the number of jobs that are lost exceed any new jobs that come in, and that’s the reason for my answer to your question.

A. There are a lot of people in the natural gas business who feel that perhaps they can benefit [from cap-and-trade] in the short term, but they also recognize in the long term that it would be destructive. If you don’t believe that, talk to the CEO of [Oklahoma City-based] Devon Energy, Larry Nichols.

Q. How do you respond to major industry leaders who say climate legislation is going to create jobs, not kill them, net total?

A. I don’t agree with that. Always look at the motives people have. There are a lot of companies that would do very well [if greenhouse-gas regulations were enacted]. General Electric. I better not start naming them. But we had a hearing on USCAP, [a coalition of] corporations that were embracing some variation of cap-and-trade. We checked and found out that all 15 or so of them had stood to make huge amounts of money if they could get cap-and-trade. So that’s my comment about that.

Q. So you believe these companies and their leaders are going along with a massive fraud that will destroy the economy in order to make money themselves?

A. It would be very damaging to the economy. I think that most of the people who don’t have a dog in this fight, people who are just looking at it, economists looking to see how destructive it would be, come to the conclusion that it would be destructive.

Q. Are there clean tech innovations that you’re interested in?

Q. On a personal level, why are you so passionate about climate change? I know you’ve been committed to this issue for a long time.

A. I was first made chairman of the Environment and Public Works Clean Air Subcommittee back in ’97. That’s when I believed that anthropogenic gases were causing global warming because everyone said it was. Until the Wharton [Econometric Forecasting Associates] came along and said what it would cost us if we were to go through with this. And of course it was just huge amounts, so we thought we’d check the science. When we started checking the science, many of the scientists came to me — once they had a place to come — and showed how they’d been shut out of the process of the IPCC. And I thought, somebody’s got to take this thing on, and so that’s why I did it.

Q. How do you think that history will view your efforts on climate change?

A. It depends on who’s writing the history.

Q. Assuming someone you like is writing the history.

A. I think they’ll say that they’re glad there’s one person who was willing to tell the truth.

* Professor John Reilly of MIT last year said Republicans had been misrepresenting his research on the potential costs of climate legislation.