Julia Cole finds evidence of the climate record in some fascinating places. Cole is a geologist at the University of Arizona. Most recently, her research has led her deep inside a limestone cave 50 miles southeast of Tucson. Preserved there, within stalagmites that have formed on the floor of the dark, perpetually humid cave, is what Cole calls “a robust archive” of climate history in the desert southwest.

The stalagmites contain an almost continuous climate record that dates back tens of thousands of years to the last ice age, a time when ice sheets covered much of North America. Subtle changes in the composition of a stalagmite as it forms, says Cole, “establish a record that ties into large-scale climate patterns.”

We know about these broad climate changes from many sources, Cole explains. But “no one had documented those changes before in such revealing detail over a long period of time in the Southwest of the United States.”

The key to Cole’s technique is her understanding of how stalagmites form. As rainwater percolates down through the soil above a cave, it loses carbon dioxide. As the water drips onto the cave floor it leaves behind mineral formations of calcium carbonate. These lumps of calcium carbonate, Cole explains, contain “preserved records of precipitated rain soaked through a filtering process.”

Cole unlocks the stalagmites’ secrets by capitalizing on the fact that their chemical composition differs subtly between wet and dry periods. In dry years, stalagmites contain more oxygen-18. This rare, heavier isotope of oxygen is less likely to evaporate in a dry period than the lighter and vastly more common form of oxygen.

By shaving the stalagmite’s core into 100-micron-thin layers, measuring small changes in the abundance of oxygen-18, and applying a sophisticated dating technique, Cole’s team can reconstruct when the region was wet and when it was dry.

Cole’s approach is similar to that taken by scientists who chart climate variability by studying tree rings. But, says Cole, “tree ring data has limitations. Trees don’t live that long. And, even more importantly for this region, there are no trees in the desert, only in the surrounding mountains.” Now, she continues, “we have a solid set of paleoclimate data below the tree line.”

Cole’s stalagmite research is already yielding results. In a February, 2010 paper in Nature Geoscience, Cole’s team confirms that wet and dry periods in the American Southwest correlate closely with the climate record derived from ice-core data in Greenland. “It’s a new picture of the climate in the Southwest during the last ice age,” Cole  says. “What this new evidence shows us is that when it was cold in Greenland, it was wet here. When it was warm in Greenland, it was dry here.”

The data has implications for the region’s future climate as well. As Cole explains, it is well documented that, as the climate warms, storms in the southwestern United States tend to move northward toward the pole. The record clearly shows  that “when the climate gets warmer, the U.S. Southwest tends to get drier.”

Her work with stalagmites is Cole’s most recent research. But over the past several decades, she has traveled around the world studying what undersea coral reefs (another calcium carbonate formation) can reveal about changes in the ocean and the paleoclimate record. Much of that work has been about trying to better understand the quasi-periodic climate pattern known as El Niño (or, more officially, the El Niño-Southern Oscillation), which occurs over the tropical Pacific Ocean every three to seven years.

Cole got “hooked on science” when she started working as a research assistant in a lab after college. “Global warming was not on the public radar screen in the early 1980s when I was in college,” she says, adding that she feels lucky to have wound up studying climate change at a time “when it is so close to the center of the news and public consciousness.”

“I have kids and I certainly find motivation in thinking about what kind of world they will inherit and what things will be like for them,” Cole says. “But ever since I became a scientist, I have also simply loved the creativity of science-the process of asking interesting questions about the world around us, and building strategies and techniques to try to answer them.”

This is the first installment of America’s Climate Scientists: A series from the Union of Concerned Scientists. Click here to read all the climate scientist profiles.

Scott Luthcke weighs Greenland — every 10 days. And the island has been losing weight, an average of 183 gigatons (or 200 cubic kilometers) — in ice — annually during the past six years. That’s one third the volume of …

It takes a certain kind of person to gather ice cores from remote glaciers, cart them back to a lab, and unlock the clues they contain about the climate record. Such a person needs to be hardy and skilled enough … 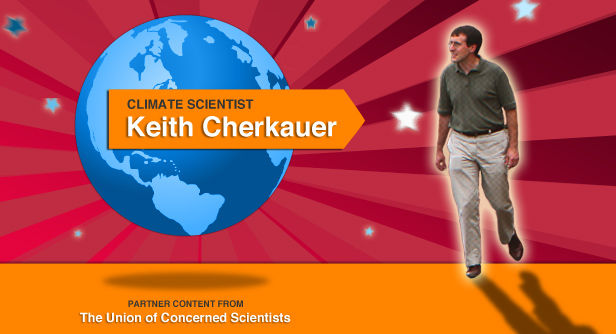 Keith Cherkauer studies mud. It’s a dirty business that has revealed a lot about global warming. As he trudged through rural Indiana farmland earlier this spring, Cherkauer, an agricultural and biological engineer at Purdue University, paid close attention to the …
See all articles in this series