Franzen tackles population and gears up for Oprah [VIDEO]

The green side of Jonathan Franzen and 'Freedom'

Franzen tackles population and gears up for Oprah [VIDEO]

This season’s It Book, Freedom by Jonathan Franzen, features a protagonist who’s profoundly worried about population growth. Here’s the author discussing the issue. (The first minute of the video has Franzen registering his “profound discomfort” at having to record “little videos like this”; the population discussion starts at 0:56.)

One of the characters in the book has a bee in his bonnet about world overpopulation, and he points out, rightly, that pretty much every serious problem we have in the world is, if not caused by too many people, certainly aggravated by it. And he’s frustrated in the book because it’s become kind of a taboo thing, nobody will talk about it, it’s the elephant in the room.

And this is part of what I think a novel is supposed to do — it’s supposed to find ways to connect the largest possible social picture with the most intimate, personal, difficult-to-express human stories.

It’s notable enough that a critically acclaimed, best-selling author is addressing this issue, but it’s also going to get an airing on Oprah. She’s chosen Freedom for her book club, proclaiming it to be “exquisite,” a “tour de force,” a “masterpiece,” “everything you want in a book,” and “one of the best novels [I] have ever read.” I’m not an Oprah watcher so I don’t know whether she’s that effusive about all her picks, but when you’ve got the most influential woman in media telling her massive audience to read a fabulous book in which population and other environmental issues feature prominently — well, that’s something.

The Oprah book club website features the above video, and the reading guide suggests discussing this question, among others:

How would you answer the essential question raised by Walter’s deal with the Texas rancher Vin Haven: What is the best way to achieve environmental conservation?

Franzen will appear on The Oprah Winfrey Show to discuss the book on Dec. 6. Stay tuned …

UPDATE: Population and other green issues didn’t come up at all during Franzen’s Oprah appearance, but he talked at length about them in an exclusive interview with Grist. 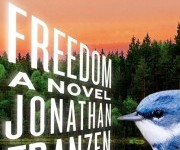 The green side of Jonathan Franzen and 'Freedom'

Ask Umbra decides to take on fiction and the Oprah Book Club in this month's Ask Umbra Book Club selection. Read about the book and find out when the conversation begins here!