On Tuesday night, 12 candidates took the stage in Ohio to debate the issues most important to the Democratic electorate. Gun control, reproductive rights, health care, the company Ellen DeGeneres keeps (yes, you read that right), and more were on the menu. One issue was conspicuously absent: climate change. Somehow, the debate’s two media hosts, CNN and the New York Times, managed to go three hours without bringing up a global crisis that polls show is not only a top issue among Democrats, but young Republicans and independents, as well.

Climate advocates and even some of the candidates themselves were unhappy about the omission. And why wouldn’t they be? Most of the candidates who qualified for the debate are actually quite well versed in climate change, thanks to pressure from activists, previous debates with a former competitor (climate hawk and Washington Governor Jay Inslee), and of course, the impacts of warming they and other Americans have experienced.

Don’t believe us? We have proof.

David Roberts of Vox (formerly David Roberts of Grist) and his colleague Umair Irfan asked all of the 23 currently active Democratic campaigns to answer six questions about climate change. These weren’t softball questions about whether candidates would rejoin the Paris Agreement or when they wanted to reach net-zero emissions. The point was to go beyond the climate science consensus and get into the power dynamics relevant to passing climate policy in 2021. 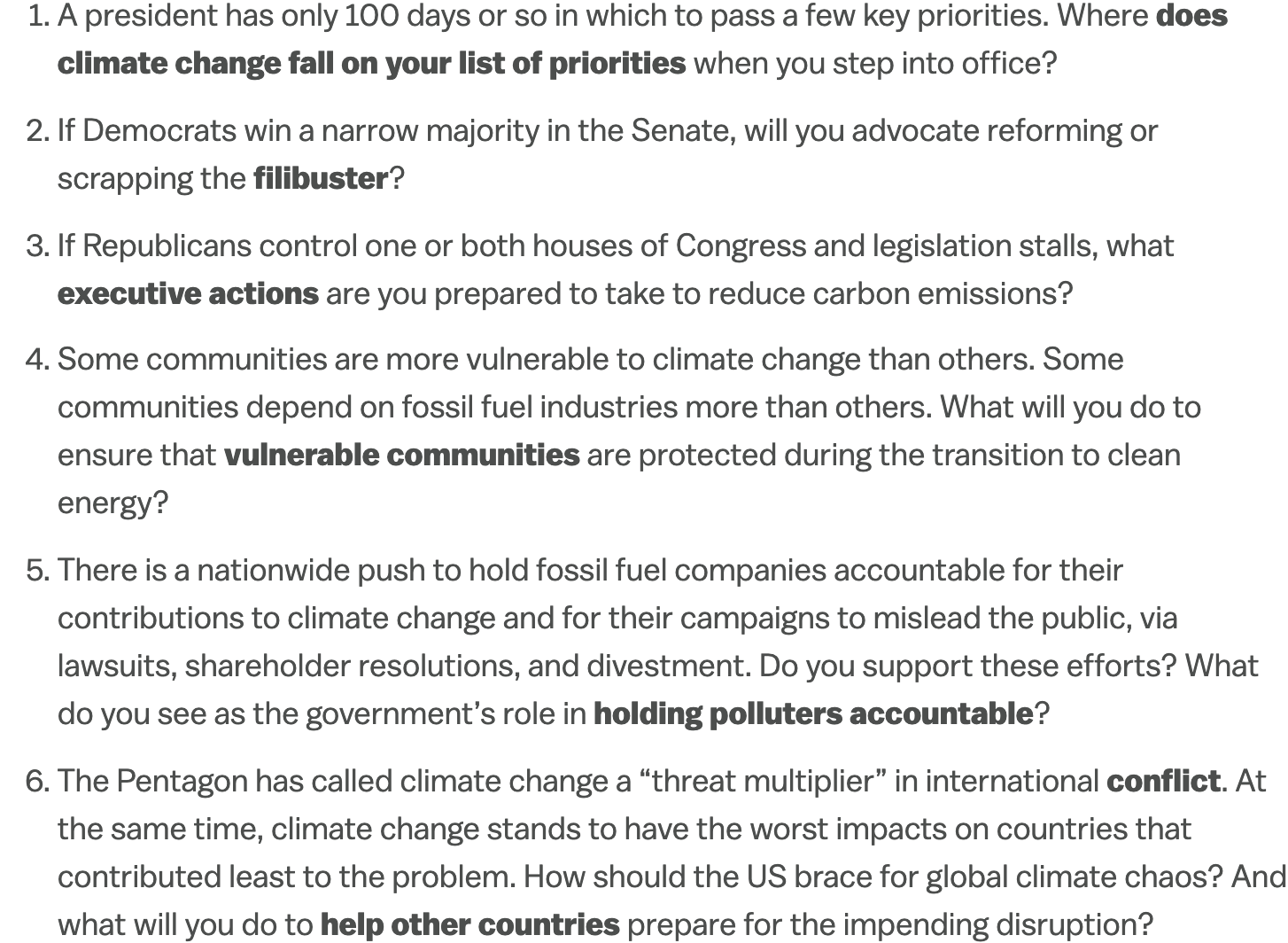 The candidates were in agreement that climate change should be a top priority during their first 100 days in office and on a number of other things, including building off of President Obama’s Clean Power Plan and decarbonizing the economy by mid-century. But the questions about eliminating the filibuster (in order to pass climate legislation) and holding fossil fuel companies accountable shed the most light on which candidates will really put the pedal to the metal on averting climate catastrophe.

Abolishing the filibuster — a move that would allow the Senate to approve legislation with a simple majority versus a requisite 60 votes — doesn’t sound climate-related, but it is. Over the past six years, lots of progressive policy proposals have hurtled through the House only to be stopped short, primarily by Senate Republicans. Abolishing the filibuster would give Democrats the potential to actually accomplish something as big as a Green New Deal (an idea almost all of the Democratic 2020 candidates have endorsed). The downside to this, of course, is that it’s an absolute gamble. If Democrats take the Senate, abolish the filibuster, and go hog-wild on progressive legislation, Republicans could do the same with conservative bills down the road, if they retake control.

So who’s willing to take the gamble, or at least reform the filibuster? Seven candidates: Warren, Sanders, Harris, Buttigieg, O’Rourke, Steyer, and Klobuchar. Warren even brought it up during the debate on Tuesday, in response to a question about gun reform. Biden and Bennet said they would not scrap it.  That means those two candidates will have to find another way to pass their comprehensive climate plans by, we guess, trying to appeal to their Republican colleagues.

All of the candidates told Vox they would hold polluters accountable, but a few went above and beyond. Sanders and Steyer used the word “prosecute” in their responses, raising the possibility of pinning polluters on criminal charges. “They have evaded taxes, desecrated tribal lands, exploited workers and poisoned communities,” Sanders said. “[I] believe this is criminal activity, and, when [I am] president, [I] will hold the fossil fuel industry accountable.” Steyer said it’s time to “create real — potentially criminal — consequences for actions they may have taken to knowingly spread false information and slow climate action.” Warren also noted she would hold polluters criminally accountable, noting recent legislation she introduced to do just that.

The candidates’ answers to these questions are a reminder of how important it is that moderators ask questions about climate change during debates. Voters don’t just need to know whether or not their candidate of choice will implement a carbon tax. They need to know whether their candidate is prepared to use the full powers of the executive branch, if she or he is willing to change the rules to get legislation through the Senate, and if fossil fuel companies will ever actually have to pay for past cover-ups and crimes.

Alas, the most recent debate didn’t get viewers any closer to understanding the nuanced differences in how those vying to face Donald Trump will fight for climate action. We do, however, now know that at least two of the 12 candidates on stage dearly miss the late John McCain. But what will they miss when the planet descends into a fiery, sodden, polluted hellscape?