President Trump’s expected decision to pull out of the Paris climate accord would damage U.S. credibility in global diplomacy for years to come — that much is sure. But its impact on emissions, and our course towards climate-change doom, is more debatable.

Federal climate action has long been stymied by the congressional puppet-mastery of fossil fuel lobbyists like the Koch brothers. Indeed, the Paris pact, which aims to limit global warming to about 2 degrees Celsius, is not binding. Some wonks have even argued that the treaty could even be stronger after the world’s second-largest emitter exits.

Well, I guess we’ll find out. But one thing is evident: Public action in the near-term has to come from states and cities. Cities in particular were in many ways the stars of the Paris climate talks; since Trump’s election, it’s been local leaders around the country (plus the entire state of California) that have been most vocal in pledging to continue to fight climate change.

The now-more urgent question: What are the most powerful ways localities can act to make lasting reductions to their greenhouse gas emissions (GHG)? Here are five crucial policy buckets. (Rinse and repeat the first two in particular.)

Here’s a depressing finding: A 2016 BuildZoom study found that no U.S. city has kept up with increased demand for housing through development focused in dense urban cores since before World War II. “Cities where housing supply met demand only achieved that balance by sprawling outward,” writes the L.A. Times. As more Americans settle further and further from where jobs and shopping is, they’re commuting longer distances, usually in cars.

Cutting GHG means cutting vehicle miles traveled (VMT), and that means Americans have to walk, bike, and take transit to work and play a lot more often than they currently do. Building more and tighter-packed homes near jobs, shopping, and shared transportation options is the most effective way to make driving the less attractive choice. This requires a radical reset on land use practices — undoing single-family zoning and incentivizing multi-family developments — that few cities seem prepared to make. But the stakes are higher than ever.

Upshot: Research by the Urban Land Institute has found that compact development cuts VMT by 20 to 40 percent compared to average outer-edge suburbs.

Leaders: Austin, Texas, is laboring to encourage more density through zoning revisions. Seattle is urbanizing more than any other city. 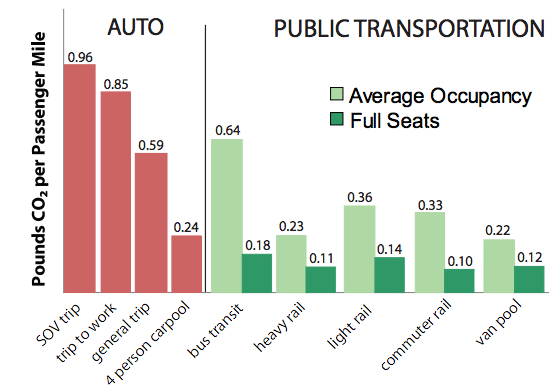 Even if you live close by, mass transit that doesn’t function reliably or go where you need isn’t worth much. Years of calculated disinvestment sadly mean that many urban transit systems can now be described that way, especially from the point of view of low-income residents. The rise of cheap ride-hailing services like Uber and Lyft doesn’t bode well for transit’s future relevance in many cities. Nor does the introduction of self-driving cars, which many believe will cause VMT to spike. Public commitments to shared mobility options will be critical to keeping urban emissions at bay.

Electricity generation is the leading source of GHG in the U.S., and buildings account for about half of all energy used. Cities with a big supply of large buildings that enforce upgrades to heating and cooling systems — through building codes, efficiency targets, financial incentives, and other tools — can shrink carbon footprints and save on energy bills.

Upshot: New York City’s efforts to green its building stock are expected to cut GHG emissions by 2.7 million metric tons — similar to removing more than 560,000 cars from the road.

Roads are a precious public commodity; charging drivers to use them in a way that’s commensurate with their value will signal people to drive less. So will charging more for parking and eliminating parking minimums from zoning codes. (The latter could also help bring down housing costs and building energy footprints).

5. Invest in renewables and electric vehicles

This chart's conservative.
Industries don't turn on a dime, but when disrupted they can move much faster than this.https://t.co/poBaqMjJXK pic.twitter.com/lLr45RrYZc

Dozens of U.S. cities have now pledged to move toward 100-percent renewable energy sources, bolstered by local utilities that have invested in solar and wind thanks to Obama-era subsidies. Those subsidies may be out the door with Trump’s plans to tear up the Clean Power Plan, but the plummeting costs of renewable energy generation have already far exceeded predictions; local governments (and large companies) that make public commitments to renewables can help send a signal to the energy market that renewables are still the future.

Similarly, investing in electric bus fleets and charging stations for private electric vehicles can wave a flag to carmakers that large urban markets demand cleaner drives. Boosting the share of electric vehicles on the road can slash auto emissions — but this has to go hand-in-hand with cleaner energy. Plugging your Tesla into a dirty grid doesn’t necessarily net gains for the environment.

Minority voters are more likely than whites to express concern about climate change and support policies to combat it; they’re also routinely targeted by tactics to block them from polling booths. Any hope of electing climate-friendly leaders to Congress — and seeing any federal climate legislation survive in the near future — may hinge on all-out effort to uphold the basic act of our fragile democracy.