Thank you, New York Fashion Week, for answering our most burning question about the impending climate apocalypse: “What will I wear?”

Grist writers Eve Andrews and Zoe Sayler delved into why — and how — this mini-collection came to exist.

Zoe: Even in an era of increasingly ambitious crossover events, this is an unlikely alliance: the Natural Resources Defense Council, Milk Studios, and 21-year-old fashion icon Luka Sabbat, who brings 1.7 million Instagram followers to the table.

Eve: I understand and respect what the NRDC is trying to do here: Get climate change on the minds of young people with influence — be that influence in the form of social media followers, fashion sense, or possession of the obscene amounts of cash it requires to purchase anything showcased at NYFW.

As NRDC Executive Director Rhea Suh wrote to us, “We want to show the world that talking about and acting on climate can come in extremely creative and different ways, and partnering with a visionary artist like Luka allowed us to do that.”

I mean, it would obviously be great if this collaboration could somehow get the influencer set to put that sweet, sweet new money toward a good cause. But as far as awareness goes, the collection’s apparent target audience is already pretty worried about the future of the planet. Now we have to think about whether we should stock up on Instagram-worthy, death-proof jackets?

That’s the detail that really throws me. Sabbat’s entire presence is inextricable from Instagram culture — it made him “Gen Z’s ‘It’ Girl.” Why? Because Instagram is the engine for consumer culture, steering a $1300 sweatshirt straight into the hands of any 21-year-old with a hefty allowance.

He’s also not the only designer to venture into the apocalyptic recently. Last year’s Fashion Week featured some (decidedly impractical) hazmat suits and thermal foil blankets. That Sabbat’s version is specifically designed to be of actual use during a climate disaster doesn’t eliminate the question: What’s up with this trend in the first place?

But fashion is just art, right? 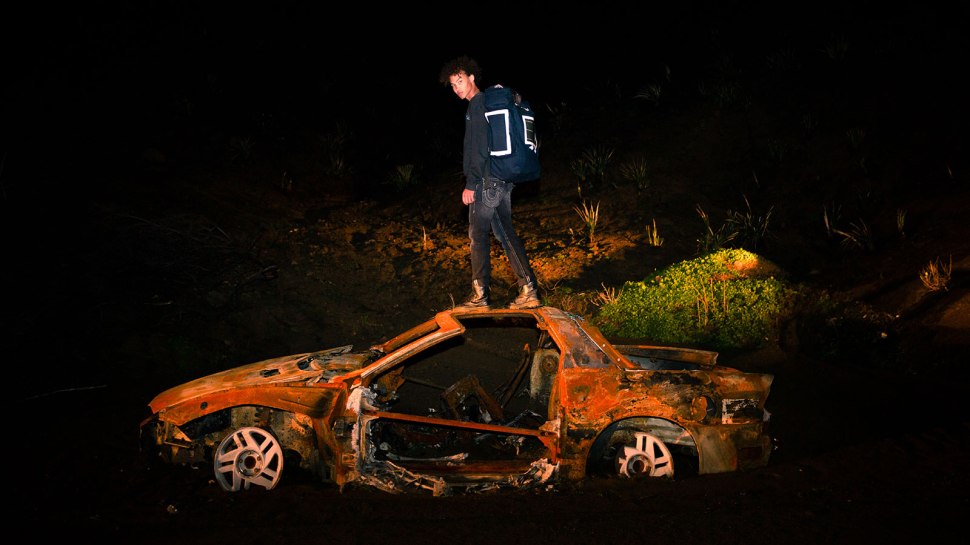 Not in 2019, baby. Fashion is first and foremost a business, the goal of which is to get anyone with money to buy as much as they can, waste and sourcing and ethics be damned. And right now, Sabbat’s a prominent feature of that industry. So much of fashion influencer culture is about consumption for the sake of consumption — buying and wearing mostly just to prove you can. The culture of consumption is fundamentally at odds with the realities of climate action.

Here’s a telling quote from a recent profile in The Cut: “‘I low-key own everything I want,’ he told me — all of Sabbat’s underwear and socks are Balenciaga because he ‘likes the finer things in life’ … Sabbat knows the power of his influence and wants to use it to make the world a better-looking place.”

Right — but at the same time, here’s what Sabbat wrote to us about that seemingly intractable conflict between nonstop copping and climate awareness: “I think anything done in the right way can work well. There are lots of brands figuring out ways to make clothes sustainable and to make less of a mess. I see more brands trying to work within the context of change, which is a good sign. I [also] think just being more conscious about what we buy and how we dispose of it will also help. Basically, paying attention is how we can fight climate change.”

That’s a great message, but I’d just love to see more emphasis on the “being more conscious about what we buy and how we dispose of it” part. Namely — that you don’t have to own everything you want!

The road to climate hell is paved with good intentions, right? Sabbat showed his collection with the heat turned way up in the Milk Studios gallery, with this explanation: “I made it uncomfortably hot in this room for you to know that there’s people that go through this every day, and they don’t have a choice.”

The Cut reported that the guests dealt with that heat by hitting the pinot grigio bar. You couldn’t write better satire!

Fashion week caters to the rich and rich-aspiring. That’s a demographic that has the potential for huge influence on shifting attitudes toward climate change. But that cultural shift has to be away from the entire concept of “must-have,” which is completely antithetical to the Kardashian Machine that Sabbat’s tied up in.

At this point I hate to admit it, but I do get the hype — I could spend all day scrolling through Sabbat’s Instagram. (Think this “Hot Mess” necklace is a climate change reference?) (Ed. note: Hot Mess is Sabbat’s clothing line.)

To me, clothing is so interesting because it’s an art form that most people can participate in. But I guess that the problem with “influencers” like Sabbat, in my eyes, is the fact that they promote the idea that clothes are irrelevant unless they’re in line with some constantly changing sense of style that fuels that cycle of consumption and waste. Sabbat recently implied that it’s no longer acceptable to wear jeans.

I guess none of my pants go outside anymore?

It does seem like someone so creative with such a huge platform — who ostensibly cares about climate change — could dream up a more fundamental transformation of how the fashion industry works. It certainly takes some imagination to make a glorified camping backpack — one that, it must be said, is undoubtedly inaccessible for the climate refugees it’s designed for — look hot.

At least we can count on one thing if our home does get as hot as that gallery: no one will be wearing jeans. Or pants, probably.